The group received a congressional charter in 1889, establishing it "for the promotion of historical studies, the collection and preservation of historical manuscripts, and for kindred purposes in the interest of American history, and of history in America."

As an umbrella organization for the profession, the AHA works with other major historical organizations and acts as a public advocate for the field. Within the profession, the association defines ethical behavior and best practices, particularly through its "Statement on Standards of Professional Conduct"[1] The AHA also develops standards for good practice in teaching and history textbooks, but these have limited influence[2] The association generally works to influence history policy through the National Coalition for History.[3]

The association publishes The American Historical Review, a major journal of history scholarship covering all historical topics since ancient history[4] and Perspectives on History, the monthly news magazine of the profession.[5] In 2006 the AHA started a blog focused on the latest happenings in the broad discipline of history and the professional practice of the craft that draws on the staff, research, and activities of the AHA.[6]

The association's annual meeting[7] each January brings together more than 5,000 historians from around the United States to discuss the latest research, look for jobs, and discuss how to be better historians and teachers. Many affiliated historical societies hold their annual meetings simultaneously. The association's web site offers extensive information on the current state of the profession,[8] tips on history careers,[9] and an extensive archive[10] of historical materials (including the G.I. Roundtable series),[11] a series of pamphlets prepared for the War Department in World War II. 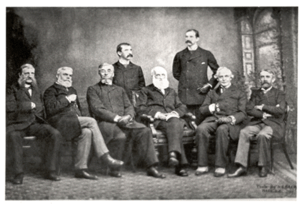 Executive officers of the American Historical Association at the time of the association's incorporation by Congress, photographed during their annual meeting on December 30, 1889 in Washington, D.C. Seated (L to R) are William Poole, Justin Winsor, Charles Kendall Adams (President), George Bancroft, John Jay, and Andrew Dickson White, Standing (L to R) are Herbert B. Adams and C. W. Bowen.

The early leaders of the association were mostly gentlemen with the leisure and means to write many of the great 19th-century works of history, such as George Bancroft, Justin Winsor, and James Ford Rhodes. However, as former AHA president James J. Sheehan points out,[15] the association always tried to serve multiple constituencies, "including archivists, members of state and local historical societies, teachers, and amateur historians, who looked to it - and not always with success or satisfaction - for representation and support." Much of the early work of the association focused on establishing a common sense of purpose and gathering the materials of research through its Historical Manuscripts and Public Archives Commissions.

From the beginning, the association was largely managed by historians employed at colleges and universities, and served a critical role in defining their interests as a profession. The association's first president, Andrew Dickson White, was president of Cornell University, and its first secretary, Herbert Baxter Adams, established one of the first history Ph.D. programs to follow the new German seminary method at Johns Hopkins University. The clearest expression of this academic impulse in history came in the development of the American Historical Review in 1895. Formed by historians at a number of the most important universities in the United States, it followed the model of European history journals. Under the early editorship of J. Franklin Jameson, the Review published several long scholarly articles every issue, only after they had been vetted by scholars and approved by the editor. Each issue also reviewed a number of history books for their conformity to the new professional norms and scholarly standards that were taught at leading graduate schools to Ph.D. candidates. From the AHR, Sheehan concludes, "a junior scholar learned what it meant to be a historian of a certain sort".

Meringolo (2004) compares academic and public history. Unlike academic history, public history is typically a collaborative effort, does not necessarily rely on primary research, is more democratic in participation, and does not aspire to absolute "scientific" objectivity. Historical museums, documentary editing, heritage movements and historical preservation are considered public history. Though activities now associated with public history originated in the AHA, these activities separated out in the 1930s due to differences in methodology, focus, and purpose. The foundations of public history were laid on the middle ground between academic history and the public audience by National Park Service administrators during the 1920s-30s.

The academicians insisted on a perspective that looked beyond particular localities to a larger national and international perspective, and that in practice it should be done along modern and scientific lines. To that end, the association actively promoted excellence in the area of research, the association published a series of annual reports through the Smithsonian Institution and adopted the American Historical Review[16] in 1898 to provide early outlets for this new brand of professional scholarship.

In 1896 the association appointed a "Committee of Seven" to develop a national standard for college admission requirements in the field of history. Before this time, individual colleges defined their own entrance requirements. After substantial surveys of prevailing teaching methods, emphases and curricula in secondary schools, the Committee published "The Study of History in Schools" in 1898.[17] Their report largely defined the way history would be taught at the high school level as a preparation for college, and wrestled with issues about how the field should relate to the other social studies.[18] The Committee recommended four blocks of Western history, to be taught in chronological order—ancient, medieval and modern European, English, and American history and civil government—and advised that teachers "tell a story" and "bring out dramatic aspects" to make history come alive.[19]

[T]he student who is taught to consider political subjects in school, who is led to look at matters historically, has some mental equipment for a comprehension of the political and social problems that will confront him in everyday life, and has received practical preparation for social adaptation and for forceful participation in civic activities.... The pupil should see the growth of the institutions which surround him; he should see the work of men; he should study the living concrete facts of the past; he should know of nations that have risen and fallen; he should see tyranny, vulgarity, greed, benevolence, patriotism, self-sacrifice, brought out in the lives and works of men. So strongly has this very thought taken hold of writers of civil government, that they no longer content themselves with a description of the government as it is, but describe at considerable length the origin and development of the institutions of which they speak.[17]

The association also played a decisive role in lobbying the federal government to preserve and protect its own documents and records. After extensive lobbying by AHA Secretary Waldo Leland and Jameson, Congress established the National Archives and Records Administration in 1934.

As the interests of historians in colleges and universities gained prominence in the association, other areas and activities tended to fall by the wayside. The Manuscripts and Public Archives Commissions were abandoned in the 1930s, while projects related to original research and the publication of scholarship gained ever-greater prominence.

In recent years, the association has tried to come to terms with the growing public history movement and has struggled to maintain its status as a leader among academic historians.

The association started to investigate cases of professional misconduct in 1987, but ceased the effort in 2005 "because it has proven to be ineffective for responding to misconduct in the historical profession."[20]

Presidents of the AHA are elected annually and give a president's address at the annual meeting: