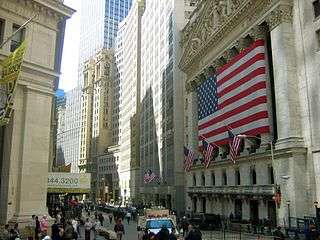 The New York Stock Exchange on Wall Street, the world's largest stock exchange in terms of total market capitalization of its listed companies[1]

Market capitalization (market cap) is the market value at a point in time of the shares outstanding of a publicly traded company, being equal to the share price at that point of time times the number of shares outstanding.[2][3] As outstanding stock is bought and sold in public markets, capitalization could be used as an indicator of public opinion of a company's net worth and is a determining factor in some forms of stock valuation.

Market cap is given by the formula

, where MC is the market capitalization, N is the number of shares outstanding, and P is the closing price per share.

Traditionally, companies were divided into large-cap, mid-cap, and small-cap.[2] The terms mega-cap and micro-cap have also since come into common use,[7][8] and nano-cap is sometimes heard. Different numbers are used by different indexes;[9] there is no official definition of, or full consensus agreement about, the exact cutoff values. The cutoffs may be defined as percentiles rather than in nominal dollars. The definitions expressed in nominal dollars need to be adjusted over decades due to inflation, population change, and overall market valuation (for example, $1 billion was a large market cap in 1950, but it is not very large now), and market caps are likely to be different country to country.

Market cap reflects only the equity value of a company. It is important to note that a firm's choice of capital structure has a significant impact on how the total value of a company is allocated between equity and debt. A more comprehensive measure is enterprise value (EV), which gives effect to outstanding debt, preferred stock, and other factors. For insurance firms, a value called the embedded value (EV) has been used.