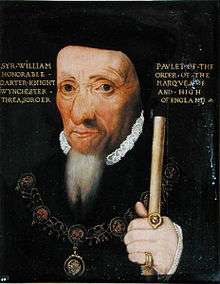 It was created in 1551 for the prominent statesman William Paulet, 1st Earl of Wiltshire. He had already been created Baron St John in 1539 and Earl of Wiltshire in 1550, also in the Peerage of England. The first Marquess was one of the most noted statesmen of his time, serving in high positions under Henry VIII and all his children, and served as Lord High Treasurer of England from 1550 to 1572. He was succeeded by his son, the second Marquess, who had been summoned to the House of Lords in his father's lifetime through a writ of acceleration in his father's junior title of Baron St John. His son, the third Marquess, was summoned to the House of Lords through a writ of acceleration as Lord St John in 1572. His grandson, the fifth Marquess, represented St Ives in the House of Commons. During the Civil War he was a strong supporter of King Charles I and became known as "the loyal Marquess". The family seat of Basing House was burnt to the ground by the Parliamentarians during the conflict. During this period, the courtesy title for the heirs apparent of the Marquesses was Baron St John; that of Earl of Wiltshire does not seem to have been used, perhaps because of an unsubstantiated tradition that that title was surrendered upon the creation of the Marquessate.[1]

He was succeeded by his son, the sixth Marquess. The sixth Marquess was a supporter of William III and Mary II and was rewarded for his support after the Glorious Revolution when he was created Duke of Bolton. He was succeeded by his son, the second Duke, who, as heir apparent to the Marquessate in 1675, was the first to adopt the courtesy title of Earl of Wiltshire.[2] The second Duke was a politician and notably served as Lord Chamberlain of the Household and as Lord Lieutenant of Ireland. On his death the titles passed to his son, the third Duke, who was also a politician. He was a Whig Member of Parliament and served as Lord Lieutenant of several counties. In 1717 he was meant to be summoned to the House of Lords through a writ of acceleration in his father's junior title of Baron St John (of Basing). However, he was mistakenly summoned as Lord Pawlett of Basing and this inadvertently created a new barony.

However, the barony of Pawlett of Basing became extinct as he had no legitimate offspring while he was succeeded in the other titles by his younger brother, the fourth Duke. He notably served as a Lord of the Admiralty and as Lord Lieutenant of both Hampshire and Glamorganshire. His eldest son, the fifth Duke, was a Member of Parliament and Lord Lieutenant of Hampshire. He was succeeded by his younger brother, the sixth Duke. He was an Admiral of the White. The sixth Duke had no sons and on his death in 1794 the Dukedom became extinct. Most of the family estates passed to his niece Jean Mary Browne-Powlett, illegitimate daughter of the fifth Duke. She was the wife of Thomas Orde, who assumed the additional surname of Powlett and was created Baron Bolton in 1797.

The surname of the later Dukes of Bolton is usually spelled "Powlett" rather than "Paulet". 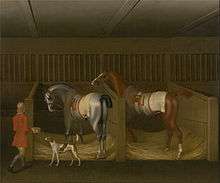 The Stables and Two Famous Running Horses belonging to His Grace, the Duke of Bolton, by James Seymour, 1747