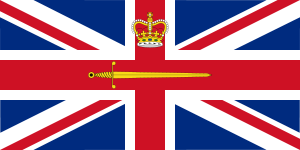 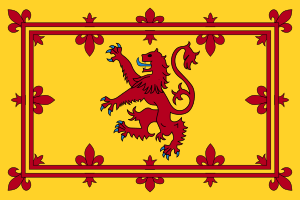 The Lord-Lieutenant (/lɛfˈtɛnənt/[1]) is the British monarch's personal representative in each county of the United Kingdom. Historically the Lord-Lieutenant was responsible for organising the county's militia, but it is today a largely ceremonial position, usually awarded to a retired notable, military officer, nobleman/woman, or businessman/woman in the county. The office is not equivalent to that of a Lieutenant Governor in the Crown Dependencies, a Governor in the Overseas Territories or (until 1972) the Governor of Northern Ireland, as Lords-Lieutenant have virtually no role in local government, nor are they responsible for promulgating local ordinances in the monarch's name.

Lieutenants were first appointed to a number of English counties by King Henry VIII in the 1540s, when the military functions of the sheriff were handed over to him. He raised and was responsible for the efficiency of the local militia units of the county, and afterwards of the yeomanry, and volunteers. He was commander of these forces, whose officers he appointed. These commissions were originally of temporary duration, and only when the situation required the local militia to be specially supervised and well prepared; often where invasion by Scotland or France might be expected.

Lieutenancies soon became more organised, probably in the reign of his successor King Edward VI, their establishment being approved by the English parliament in 1550. However, it was not until the threat of invasion by the forces of Spain in 1585 that lieutenants were appointed to all counties and counties corporate and became in effect permanent. Although some counties were left without lieutenants during the 1590s, following the defeat of the Spanish Armada, the office continued to exist, and was retained by King James I even after the end of the Anglo-Spanish War.

The office was abolished under the Commonwealth, but was re-established following the Restoration under the City of London Militia Act 1662, which declared that:

[T]he King's most Excellent Majesty, his Heirs and Successors, shall and may from Time to Time, as Occasion shall require, issue forth several Commissions of Lieutenancy to such Persons as his Majesty, his Heirs and Successors, shall think fit to be his Majesty's Lieutenants for the several and respective Counties, Cities and Places of England and Dominion of Wales, and Town of Berwick upon Tweed.

Although not explicitly stated, from that date lieutenants were appointed to "counties at large", with their jurisdiction including the counties corporate within the parent county.[2] For example, lieutenants of Devon in the seventeenth and eighteenth centuries appointed deputy lieutenants to the City of Exeter, and were sometimes described as the "Lieutenant of Devon and Exeter"[3] The one exception was Haverfordwest, to which a lieutenant continued to be appointed until 1974. The origin of this anomaly may have lain in the former palatine status of Pembrokeshire.[2]

The City of London was uniquely given a commission of lieutenancy, and was exempt from the authority of the lieutenant of Middlesex. The Constable of the Tower of London and the Warden of the Cinque Ports were ex-officio lieutenants for the Tower Hamlets and Cinque Ports respectively, which were treated as counties in legislation regarding lieutenancy and militia affairs.[2]

The official title of the office at this time was His or Her Majesty's "Lieutenant for the county of x", but as almost all office-holders were Peers of the realm, they were referred to as "Lord-Lieutenant".

An Act to make the Militia of this Kingdom more useful (Geo 2, c.9) was passed by the Parliament of Ireland in 1715. This provided for the issuing of commissions to appoint persons as "his Majesty's lieutenant or lieutenants, governor or governors, and commissioners of array for the several and respective counties, cities, and places of Ireland". The lieutenants were empowered to embody militia regiments.

Although Colin, Earl of Balcarres was appointed Lord Lieutenant of Fife in 1688,[4] and lieutenants were appointed to a few counties from about 1715, it was not until 1794 that permanent lieutenancies were established by Royal Warrant. By the Militia Act 1797,[5] the lieutenants appointed "for the Counties, Stewartries, Cities, and Places" were given powers to raise and command county militia units.

The Lord Provosts of Edinburgh, Glasgow, Aberdeen, and Dundee are, by virtue of office, also the Lord-Lieutenant of their respective city.

While in their lieutenancies, Lord-Lieutenants are among the few individuals in Scotland officially permitted to fly the banner of the Royal Arms of Scotland, or Lion Rampant of Scotland as it is more commonly known.

The Militia Act 1802[6] provided for the appointment of lieutenants to "Lieutenants for the Counties, Ridings, and Places" in England and Wales, and gave them command of the county militia. In the case of towns or cities which were counties of themselves, the "chief magistrate" (meaning the mayor, chief bailiff or other head of the corporation) had the authority to appoint deputy lieutenants in the absence of an appointment of a lieutenant by the crown.

The Regulation of the Forces Act 1871[7] removed the lieutenant as head of the county militia, as the jurisdiction, duties and command exercised by the lieutenant were revested in the crown, but the power of recommending for first appointments was reserved to the lieutenant.

The Militia Act 1882[8] revested the jurisdiction of the lieutenants in the crown.

The lieutenancies were reestablished on a new basis by Section 29 of the 1882 Act which stated that "Her Majesty shall from time to time appoint lieutenants for the several counties in the United Kingdom". Counties for lieutenancy purposes were also redefined as "a county at large, with the exception that each riding of the county of York shall be a separate county". The text of the letters patent appointing lieutenants under the act stated they were to be:

...Our Lieutenant of and in the County of X and of all cities boroughs liberties places incorporated and privileged and other places whatsoever within the said county and the limits and precincts of the same.[9]

Haverfordwest was permitted to retain a lieutenant while the Tower Hamlets and Cinque Ports were to be continue to be regarded as counties for lieutenancy purposes.

From 1889 lieutenancy counties in England and Wales were to correspond to groupings of administrative counties and county boroughs established by the Local Government Act 1888. The creation of a new County of London also led to the ending of the Tower Hamlets lieutenancy. The Act also extinguished the lieutenancy of the Cinque Ports.

Section 69 of the Local Government (Ireland) Act 1898 realigned the lieutenancy counties with the new administrative counties created by the Act. The one exception was County Tipperary, which although administered by two county councils, was to remain united for lieutenancy. In contrast to the legislation in England and Wales, each county borough was to have its own lieutenant, and those counties corporate not made county boroughs were abolished. The effect of this was to create a lieutenant for the county boroughs of Belfast and Londonderry, and to abolish those for the city of Kilkenny, borough of Drogheda and town of Galway.

The office of lieutenant was honorary, and held during the royal pleasure, but virtually for life. Appointment to the office is by letters-patent under the great seal. Usually, though not necessarily, the person appointed lieutenant was also appointed custos rotulorum or keeper of the rolls. Appointments to the county bench of magistrates were usually made on the recommendation of the lieutenant.

The Territorial and Reserve Forces Act 1907[10] established County Territorial Force Associations, of which the lieutenant was to be head, styled president of the county association. It restated the combination of counties and counties corporate as lieutenancy counties.

Local Government reform in England in 1965 led to the appointment of lieutenants to Greater London[13] and Huntingdon and Peterborough, and the abolition of those of the counties of London, Middlesex and Huntingdon.

A more fundamental reform of local government throughout England and Wales (outside Greater London) created a new structure of metropolitan, non-metropolitan and Welsh counties in 1974. Section 218 of the Local Government Act 1972 that established the new system stated: "Her Majesty shall appoint a lord-lieutenant for each county in England and Wales and for Greater London..." The Act appears to be the first statutory use of the term "lord-lieutenant" for lieutenants to counties.

In 1975 counties ceased to be used for local government purposes in Scotland. The Local Government (Scotland) Act 1973 replaced the counties with regions, and each region was to have one or more lord-lieutenants appointed.[14] The areas to which they were appointed approximated to the counties and were based and were defined in terms of the new local government districts. 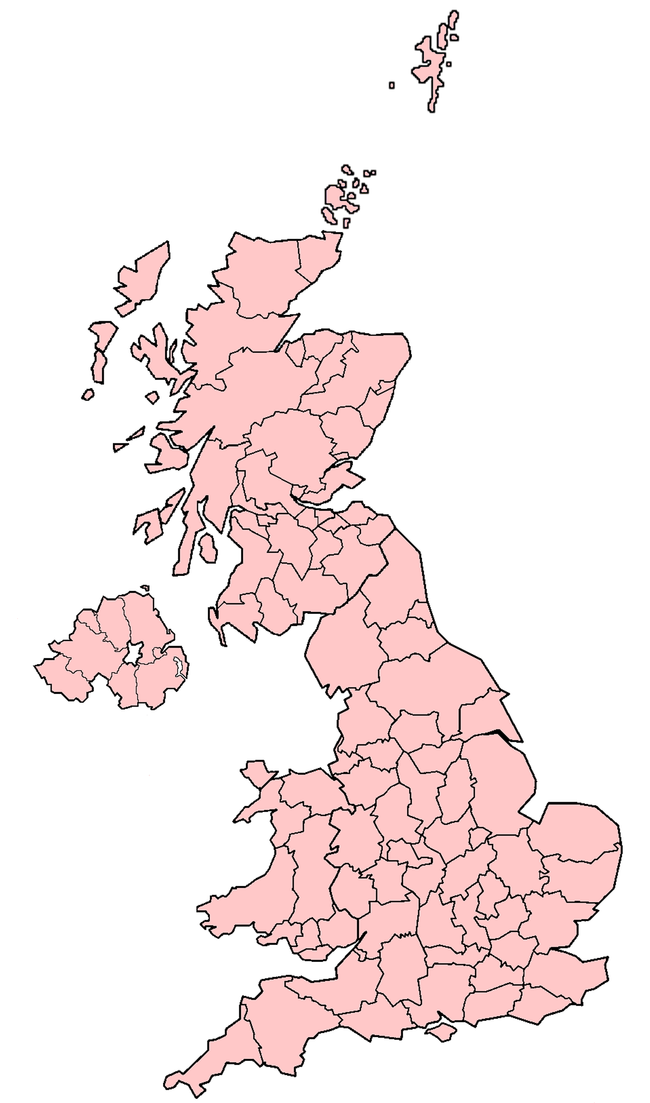 The Lieutenancy areas of the United Kingdom as of 2012 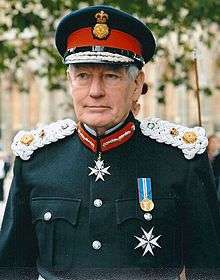 In 1996 Scottish regions and districts were abolished on further local government reorganisation, and since that date lord-lieutenants have been appointed to "lieutenancy areas", roughly equivalent to the old Scottish counties.[15]

Partial reform of local government in England since 1995 has led to the creation of so-called ceremonial counties to which lord-lieutenants are now appointed. The Lieutenancies Act 1997 is the most recent piece of primary legislation dealing with Lieutenancies in England and includes the definitive list of the current areas used. Ceremonial counties may comprise combinations of county council areas and unitary authorities.[16]

Since the local government re-organisation of 1996 in Wales, lord-lieutenants are now appointed to "preserved counties", i.e. the counties used for administrative purposes from 1974 to 1996.[17]

The City of London was unaffected by changes introduced since 1882. It has a Commission of Lieutenancy rather than a single lord-lieutenant. The head of the commission is the Lord Mayor of the City of London.

Lord-Lieutenants are the monarch's representatives in their lieutenancy. It is their foremost duty to uphold the dignity of the Crown, and in so doing they seek to promote a spirit of co-operation and good atmosphere by the time they give to voluntary and benevolent organisations and by the interest they take in the business and social life of their counties.

The modern responsibilities of Lord-Lieutenants include:

As the sovereign's representative in his or her county, the Lord-Lieutenant remains non-political and does not hold office in any political party. They are appointed for life, although the customary age of retirement is 75 and the sovereign may remove them. 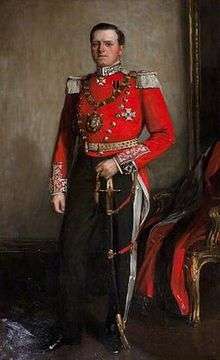 Since at least the eighteenth century a military-style uniform has been worn by male Lieutenants (appropriate to the military origins of the post). Since 1831 this has been analogous to the uniform worn by a General Staff Officer, but with silver lace in place of the gold worn by Regular officers.[18] Over time, the design of the uniform changed in line with changes made to army uniform.[19] At present, it is a dark blue uniform in the style of a General Officer's Army No. 1 dress (but with buttons, shoulder-boards, sash etc. in silver rather than gold). A cap is worn, and a sword with a steel scabbard. The badge on the cap etc. varies depending on where the Lieutenant's County is situated: a rose is worn in England, shamrocks in Northern Ireland, a thistle in Scotland and Prince-of-Wales feathers in Wales. The uniform for a male vice lord-lieutenant and for deputy lieutenants is of a similar style, but with features to distinguish it from that of a lord-lieutenant.

The Lord Lieutenant of Ireland was the head of the British administration in Ireland until the foundation of the Irish Free State in 1922.

Forms of address for the Lord-Lieutenant

Approximate equivalents in other countries