Mary Lowe Good (born June 20, 1931)[1] is an inorganic chemist who has worked academically, in industrial research and in government. Dr. Good has contributed to the understanding of catalysts such as ruthenium which activate or speed up chemical reactions.[2] She has held high-level positions in the academic, industrial, and government sectors, where she has been a strong proponent of science, science education, and women in science.[3] She has received a number of significant awards including the Garvan–Olin Medal, the Othmer Gold Medal, the Priestley Medal, and the Vannevar Bush Award.[4]

Mary Lowe was born in Grapevine, Texas to Winnie and John Lowe. The family moved to Kirby, Arkansas in 1942. Her father was a principal in a local school,[1] and her mother was a teacher and librarian.[2] The family later moved to Willisville, Arkansas, where Mary attended high school.[1] Lowe initially attended Arkansas State Teacher's College (now the University of Central Arkansas) with the intention of being a home economics teacher. She became interested in chemistry as a freshman and changed her major to chemistry and physics, receiving her B.Sc. from the University of Central Arkansas in 1950.

Her professors encouraged her to go to graduate school. She received a fellowship, which enabled her to study radiochemistry with Raymond R. Edwards at the University of Arkansas. At age 19, as an atomic energy research assistant, she received her first Q-level government clearance.[1] In 1952, she married Bill Jewel Good, a fellow graduate student in physics.[2] Mary Lowe Good received her MS in 1953 and her PhD in 1955 from the University of Arkansas.[1][5] Her graduate work involved studying radioactive iodine in aqueous solutions (used for treating thyroid conditions). She worked on processes of solvent extraction of metal complexes and described the chemical and physical properties of chemical species in an organic solvent.[6] She was able to explain why solutions of radioactive iodine were unstable, and determine the concentration at which species would be at equilibrium values, by applying the Nernst equation effect.[1]

In 1958 Good and her husband moved to New Orleans when both were offered positions at a new campus that was being established.[1] The Louisiana State University New Orleans (LSUNO) was the first university in the southern states to open as a fully integrated institution.[7] Expanding on her work in radiochemistry, Good became interested in using spectroscopy to study inorganic chemistry compounds, taking measurements and relating experimental results to theoretical predictions. She was able to study molecular bonding in both solutions and solid states.[1][6] She also was able to extract rhodium complexes, using organic solvents, and demonstrate that they were bimetallic.[1]

Good moved up the academic ranks to become the Boyd Professor of Chemistry at New Orleans (1974-1978),[1] the first woman to achieve the university's most distinguished rank.[8] From 1978-1980, she returned to Baton Rouge to develop a new program as the Boyd Professor of Materials Science, Division of Engineering Research.[1]

Good was one of the first people to use Mössbauer spectroscopy techniques for basic chemical research.[6] Mössbauer spectroscopy enables researchers to study the interactions of gamma rays with matter, observing very small differences in the energy of electrons within atoms. This data can be used to identify the molecular structure of complicated compounds containing metal ions.[2]

Dr. Good contributed to the understanding of catalysts such as ruthenium which activate or speed up chemical reactions. At that time, no one had attempted to observe Mössbauer effects in ruthenium, in part because it had to be examined at extremely low temperatures, cooled by liquid helium. Good was able to study ruthenium, which exists in a variety of oxidation states, and derive detailed chemical and structural information.[6]

She also has done work in materials science on the physical and biological investigations of marine antifouling coatings, used to remove barnacles from ships.[6] Her publications include more than 100 articles in refereed journals[9] and several books.[6]

In 1980, Mary Lowe Good was approached to become head of the Engineered Materials Research division at Signal Research Center, Inc.[2] (later United Oil Products, later Allied-Signal Inc.), with a staff of 400 scientists and technicians and annual sales of approximately $3 billion.[13] In 1981 Mary Good was chosen as Vice-President and Director of Research. She headed the Research Center during a period of significant changes (ownership, mergers, acquisitions and divestitures), maintaining a focus on new technology development and its licensing and commercialization. She became President and director of research for Signals Research Center in 1985, and President of Allied-Signal Engineered Materials Research in 1986[2] and then the Senior Vice-President of Technology, coordinating the activities of three research centers.[8][14]

In 1980 she was appointed to the National Science Board of the National Science Foundation by Jimmy Carter. In 1986 she was appointed to it again by Ronald Reagan.[15] From 1998 to 1991, she was the first woman to chair the board.[2] In 1991 President Bush appointed her to the President's Council of Advisors on Science and Technology (PCAST).[16] All three positions were part-time commitments, held during the period in which she worked at Allied-Signal Inc.

In 1993 Dr. Good left Allied Signal to take a four-year full-time position as the Under Secretary for Technology for the Technology Administration in the Department of Commerce, under the Clinton Administration.[17] During this time Good lead the Clean Car Initiative to develop a hybrid gas-electric car.[2] She encouraged the government to fund basic research and emerging technologies.[2]

University of Arkansas at Little Rock

In 1997 Dr. Good became the Donaghey University Professor at the University of Arkansas at Little Rock. She also became the founding Dean of the George W. Donaghey College of Engineering and Information Technology (EIT).[18] She retired July 1, 2011, becoming Dean Emeritus of the College of Engineering and Information Technology at the University of Arkansas-Little Rock and Special Advisor to the Chancellor for Economic Development.[9]

In 1976 Mary Lowe Good was initiated into the Beta Phi Chapter of Alpha Chi Sigma at the South Dakota School of Mines.[19]

She has been member for Fund for Arkansas, LLC and Stage 1 Diagnostics, and has served on the boards of Delta Trust & Bank and St. Vincent Infirmary, Biogen Idec, IDEXX Laboratories, Cincinnati Milacron, Ameritech, Acxiom Corporation.[20]

From 1988 to 1993 Mary L. Good was president of Zonta International Foundation, an organization supporting the involvement of women in business and science, and the improvement internationally of their legal, political, economic, educational and health status.[2][6][21]

Dr. Good was the founding Chairman of ASTRA, the Alliance for Science & Technology Research in America, beginning in 2000. She is a strong proponent of STEM education and a supporter of women in technology, and is recognized as a national leader in this area.[3]

The American Association for the Advancement of Science (AAAS) elected Dr. Good to serve as the president in 2001.[22] 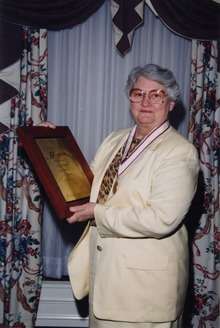 "For her achievements as an educator and industrial research manager. An extraordinary statesperson, a distinguished public servant, and a remarkable scientist, she has contributed broadly to the understanding and promotion of the value of science and technology."[36]