Helen Murray Free (born February 20, 1923, Pittsburgh, PA) is a retired American chemist and educator. She received a B.A. in chemistry from The College of Wooster in 1944 and an M.A. in management from Central Michigan University in 1978. In 1947 she married Alfred Free, a fellow researcher in urinalysis. She is most known for her creation of many self-testing systems for diabetes while working at Miles Laboratories, which is now owned by Bayer AG. She currently is an Adjunct Professor of Management at Indiana University South Bend, and a Consultant for Bayer AG.[1] 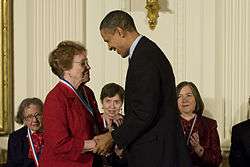 Helen Murray was born on February 20, 1923. She was the daughter of James S. Murray, a coal company salesman, and Daisy Piper Murray, who died during an influenza epidemic when Helen was six.[1]

Helen received her early education from the public schools in Youngstown, Ohio, and graduated in 1941 as the valedictorian of Poland Seminary High School. While attending a summer camp at the College of Wooster, Helen set her heart on attending Wooster. Greatly influenced by her high school English teacher, she originally intended to major in English and Latin in hopes of becoming a teacher; however, these plans soon changed. In December 1941 when Pearl Harbor was bombed, many young men either enlisted or were drafted into the army. Because of this, women were encouraged to pursue careers in science, so Helen switched her major to chemistry in which she received her B.S. in 1944. She has said that her switch to chemistry was the “most terrific thing” that ever happened to her.[1]

After graduating from Wooster, Helen immediately began working as a quality control chemist for Miles Laboratories (known as the creators of Alka-Seltzer); however, she aspired to be a researcher as opposed to working in quality control. When Alfred Free had a position open in his biochemistry research group, she interviewed and filled the position.[2] They would marry in 1947 and have six children.

Originally they researched different antibiotics before they moved on to dry reagent systems. They refined the Clinitest, a tablet that measured glucose levels in the urine of diabetic patients, and developed the Acetest, another tablet test for diabetes.[2][3]

Later, Free worked with her husband to move the tests from tablets to strips, introducing Clinistix (the famous “dip-and-read” test) in 1956. It was the first dip-and-read diagnostic test strip for monitoring glucose in urine.[3] Several other testing strips were developed and added to the market, including Uristix, Ketostix, Dextrostox, Labstix, and a still-current product, Multistix.[2][1] These products are still used today.

In 1969, Free moved into the Growth and Development Department, and she eventually became the director of Specialty Test Systems in 1976. She was Director of Marketing Services for the Research Products Division when Bayer Diagnostics acquired Miles in 1978.[4][5]

She also earned an MA in Management (Health Care Administration) from Central Michigan University (1978), and is an Adjunct Professor of Management at Indiana University South Bend.[6]

By 1975, Free had earned seven patents for her improvements in medical and clinical urinalysis testing. In that year, she and her husband co-authored their second book, Urinalysis in Laboratory Practice, which is still a standard work in the field.[6]

She retired in 1982, but continues to work as a consultant for Bayer Diagnostics in Elkhart, Indiana.

After her retirement, she became an active promoter of science education. She has devoted special attention to educating both female and underprivileged students, through programs such as "Kids & Chemistry" and "Expanding Your Horizons."[3]

In 1980, Helen Free received the Garvan–Olin Medal, given to women for distinguished service in the field of chemistry.[1] In 1996, she received the Kilby Award for lifetime achievement.[7]

In 1993 she was elected president of the American Chemical Society.[8] As president, Free considered her top priority to be to raise public awareness of the positive role chemistry has played in our lives. The ACS named an award in her honor, the Helen M. Free Award in Public Outreach.[8][9]

In 2000 she was inducted into the National Inventor's Hall of Fame.[10]

In 2010 she was awarded the National Medal of Technology and Innovation by President Barack Obama.[11][12][13]

The work of Helen and Al Free in developing diagnostic test trips was designated a National Historic Chemical Landmark by the American Chemical Society on May 1, 2010, at the ETHOS Science Center in Elkhart, Indiana. [14]