Matiur Rahman (October 29, 1941 – August 20, 1971) was a flight lieutenant of Pakistan Air Force and a recipient of Bir Sreshtho, Bangladesh's highest military gallantry award for his actions during the Liberation War of Bangladesh.

He attempted, in order to escape from Pakistan and join the Bangladesh Liberation War, to hijack a T-33 aircraft (code named "Blue Bird"[2]) being flown by a 21 year old Pilot Officer Rashid Minhas, who was conducting his second solo flight. Rahman stopped the aircraft on the runway, climbed into the cockpit and knocked Minhas unconcious. He nearly reached the Indian border, but Rashid Minhas regained consciousness and diverted the plane. Both men struggled to control the low flying jet. Minhas then released the canopy, since he wasn't properly strapped in, Rahman flew out of the cockpit. The jet was flying too low for Minhas to recover. It shortly crashed nearby, killing him. For his support to the state of Bangladesh, Rahman was decorated by Bangladesh with the Bir Sreshtho award.[3]

Matiur Rahman was born on 29 November 1941 in Old Dhaka Aga Sadek Road 109 in his ancestral houses "Mobarok Lodge". His father was Maulvi Abdus Samad and his mother was Syeda Khatun Mobarakunnesa. Among nine brothers and two sisters, Rahman was the sixth.[4]

He completed his primary education at Dhaka Collegiate School. After that he was admitted into Pakistan Air Force School Sargodha in West Pakistan. In 15th August 1961, he joined in the Pakistan Air Force Academy (then Pakistan Air Force College) at Risalpur.[2] On 22 June 1963, Matiur Rahman was commissioned as a Pilot Officer from the 36th GD(P) Course and was posted at No. 2 Squadron of Mauripur Air Base (now Masroor) at Karachi in West Pakistan. After that he successfully completed the Jet Conversion Training on T-33 jet trainers in that base. He successfully passed the course with a mark of 75.66% and was earmarked for Fighter Conversion Training. Fighter Conversion Training took place in F-86 Sabre Jets, this course he passed with a mark of 81%. He was posted in Peshawar (in No.19 Squadron) due to his bright result in the Fighter Conversion Course.[2][5][4]

His rank was Flying Officer during the Indo-Pakistani War of 1965. After the war, he went back to Sargodha to attend the Mig Conversion Course. He was promoted to the rank of Flight Lieutenant in 1967.

During the Bangladesh Liberation War

Flight Lieutenant Matiur Rahman smuggled the family of Group Captain Taher Quddus on Royal Saudi Arabian C-130 transport plane bound for Riyadh during the liberation war of Bangladesh.[6] Matiur Rahman and his family went to Dhaka for a two-month vacation at the end of January, 1971. He was staying in the village of Ramanagar in Raypur during the military operation of 25 March 1971 conducted by the Pakistan army in the name of Operation Searchlight. Despite being a member of the PAF, Rahman opened a training camp in Vairab and started training Bengali people who were willing to join the Mukti Bahini. He formed a small defense force with the willing members and a few collected weapons. His camp was bombed by the PAF on 14 April 1971. But Rahman anticipated the attack beforehand and changed the place of his camp. Thus, his crew and he was saved from the bombing. Rahman returned to Dhaka on 23 April and then returned to Karachi on 9 May with his family.

Matiur Rahman was an instructor pilot at PAF Base Masroor in 1971.[7] He was planning to return to Bangladesh to join the Bangladesh Liberation War with a plane. On 20 August 1971, Pilot Officer Rashid Minhas was scheduled to fly with a T-33 training plane. Rahman saw Minhas about to take off and asked to join him.[8] He attempted to hijack the T-33 in midair from Karachi, Pakistan to India in order to join the liberation movement. He knocked out Rashid to that purpose.[9]

After taking the control of the plane, Rahman was flying it below the usual altitude to deceive the radar. Pakistan's version of events is that his trainee pilot, Minhas, forced the plane to crash rather than allow the hijacking to succeed.[3] In another version, Minhas struggled physically to wrest control from Rahman; each man tried to overpower the other through the mechanically linked flight controls. Some 32 miles (51 km) from the Indian border, the jet crashed near Thatta. Both men were killed.[10] Rahman's body was found near the crash site. Rahman's widow, Milly, and his two daughters were imprisoned for a month by Pakistan Air Force, and were released on September 29, 1971.[11][12] 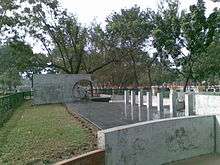 After over 30 years of negotiations, Rahman's body was finally returned to Bangladesh on 24 June 2006 for a ceremonial and highly symbolic reburial in 2006. Pakistani foreign ministry spokesperson Tasneem Aslam described it as a 'goodwill gesture'.[13] He was buried at the Martyred Intellectuals Graveyard, in Mirpur, Dhaka, with full military honours.[11] His original burial in a grave in fourth class employees graveyard in Pakistan and the hanging of his photo at the entrance of Mashrur Airbase identifying him as a Traitor had been a sore point between Bangladesh and Pakistan for decades.[14][4] 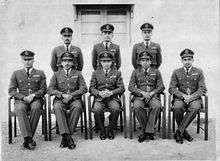 Matiur as a Pilot Officer in 1963 with other newly commissioned officers (sitting in the front row, from second of right)

There is a docudrama based on Matiur's life named Ognibolaka where Bangladeshi film actor Riaz has acted in the role of Matiur and Tarin played the role of his wife Mili.

The Bangladesh Air Force's Air Base at Jessore is also named after him.[1] The air force also gives out a trophy named after him for best performance in the flying training.[15]