This article is about the coffee brand. For other uses, see Maxwell House (disambiguation).

Maxwell House is a brand of coffee manufactured by a like-named division of Kraft Foods. Introduced in 1892 by wholesale grocer Joel Owsley Cheek (1852-1935),[1] it was named in honor of the Maxwell House Hotel in Nashville, Tennessee. For many years, until the late 1980s, it was the largest-selling coffee in the United States. The company's slogan is "Good to the last drop", which is often incorporated into their logo and is printed on their labels.

In 1884 Joel Cheek moved to Nashville and met Roger Nolley Smith, a British coffee broker who could reportedly tell the origin of a coffee simply by smelling the green beans. Over the next few years, the two worked on finding the perfect blend, and in 1892 Cheek approached the food buyer for the Maxwell House Hotel and gave him 20 pounds of his special blend for free. After a few days, the coffee was gone, and the hotel returned to its usual brand until hearing of complaints from patrons and others who liked Cheek's coffee better, the hotel bought Cheek's blend exclusively.

Inspired by his success, Cheek resigned from his job as a coffee broker and formed a wholesale grocery distributor with partner John Neal, the Nashville Coffee and Manufacturing Company, specializing in coffee with Maxwell House Coffee, as it came to be known, as the central brand. Later, the Nashville Coffee and Manufacturing Company was renamed the Cheek-Neal Coffee Company. Over the next several years, the Maxwell House Coffee brand became a well-respected name that set it apart from the competition.[2]

"Good to the last drop" 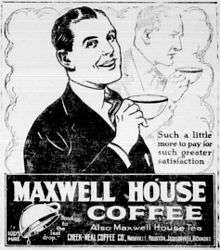 In 1915 Cheek-Neal began using a "Good to the last drop" slogan to advertise their Maxwell House Coffee. For several years, the ads made no mention of Theodore Roosevelt as the phrase's originator. By the 1930s, however, the company was running advertisements that claimed that the former president had taken a sip of Maxwell House Coffee on a visit to Andrew Jackson's estate, The Hermitage, near Nashville on October 21, 1907, and when served coffee, he proclaimed it to be "good to the last drop".[3] During this time, Coca-Cola also used the slogan "Good to the last drop".[4] Later, Maxwell House distanced itself from its original claim, admitting that the slogan was written by Clifford Spiller, former president of General Foods Corporation, and did not come from a Roosevelt remark overheard by Cheek-Neal. The phrase remains a registered trademark of the product and appears on its logo.

The veracity of the Roosevelt connection to the phrase has never been historically established. In the local press coverage of Roosevelt's October 21 visit, a story concerning Roosevelt and the cup of coffee he drank features a quote which does not resemble the slogan.[5] The Maxwell House Company claimed in its own advertising that the Roosevelt story was true; in 2009, Maxwell House ran a commercial with Roosevelt repriser Joe Wiegand, who tells the "Last Drop" story.[6]

Expansion of the product line

In 1942 General Foods Corporation, successor to the Postum Company began supplying instant coffee to the U.S. armed forces. Beginning in the fall of 1945, this product, now branded as Maxwell House Instant Coffee, entered test markets in the eastern U.S. and began national distribution the following year.

In 1969 General Foods in the UK launched granulated coffee, using a pantomime stage format in the London Hilton for a show called "Once Upon a Coffee Time". In this story, the weak "Prince of Powdah" and his mentor "Reschem" travel the world in search of blends. Meeting and falling in love with "Princess Purity", and fighting the dragon "Old Hat", the young man emerges as "Prince Granulo", heir to the Kingdom of Maxwell. This show was written by Michael Ingrams, produced by the Mitchell Monkhouse Agency, and designed by Malcolm Lewis and Chris Miles of Media.

In 1976 the product was joined by "Maxwell House A.D.C." coffee, the name reflecting its intended use in automatic drip coffee makers such as Mr. Coffee, which were in the process of pushing aside traditional coffee-preparation methods. In 1972, the company had introduced "Max-Pax" ground coffee filter rings, aimed at the then still-strong market for drip coffee preparation. Although this method, too, has been eclipsed, the Max-Pax concept was subsequently adapted as Maxwell House Filter Packs, first so called in 1989, for use in automatic coffee makers. By the 1990s, the company had quietly discontinued formulations for specific preparation methods.

The brand is now marketed in ground and measured forms, as well as in whole-bean, flavored, and varietal blends. A higher-yield ground coffee, "Maxwell House Master Blend", was introduced in 1981 and "Rich French Roast", "Colombian Supreme", and "1892", this last a "slow-roasted" formulation, in 1989. In 1992, the company added cappuccino products to its line with Cappio Iced Cappuccino in that year and Maxwell House Cappuccino in 1993. In recent years, the names of these products have been modified by the company to present a more "uniform" Maxwell House brand image. 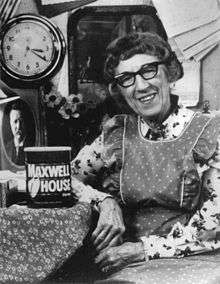 Margaret Hamilton as Cora, circa 1977

During the 1920s, the Maxwell House brand began to be extensively advertised across the US. Total advertising expenditures rose from $19,955 in 1921 to $276,894 in 1924, and consequently the brand was cited as the most well-known coffee brand in a 1925 study of consumer goods.[7]

Maxwell House was also the sponsor of the radio version of Father Knows Best. Each episode began with the youngest daughter Kitten asking, "Mother, is Maxwell House really the best coffee in the whole world?", to which her mother would reply, "Well, your father says so, and Father Knows Best!" It was later replaced by Postum, a hot decaffeinated beverage that was touted by Father as being a calming beverage that would neither keep you up nor make you jittery. (In the 1980s, series lead Robert Young was an endorser of the Sanka brand that "Maxwell House Decaffeinated" later superseded in the United States.)

Canadian advertising of Maxwell House has differed. In the early-1980s actor Ricardo Montalban promoted Maxwell House in commercials with the theme "Morning and Maxwell House." In 1985, they switched to more upbeat 'Me and Max' campaigns with the common tagline "Hugga Mugga Max."and Good to the last drop.

Maxwell House was the long-time sponsor of the early television series Mama, based on the play and film I Remember Mama. It starred Peggy Wood as the matriarch of a Norwegian-American family. It ran on the CBS network from 1949 to 1957 and was perhaps the first example of product placement on a TV show, as the family frequently gathered around the kitchen table for a cup of Maxwell House coffee, though these segments, aired towards the end of each episode, were usually kept separate from the main storyline. Early television programs were frequently packaged by the advertising agencies of individual sponsors. As this practice became less common in the late 1950s, Maxwell House, like most national brands, turned to "spot" advertising, with the agencies creating sometimes long-running campaigns in support of their products. One such 1970s campaign for Maxwell House featured the actress Margaret Hamilton, the former wicked witch in The Wizard of Oz, as Cora, the general store owner who proudly announced that Maxwell House was the only brand she sold. Maxwell House was also a well-known sponsor of the Burns and Allen radio show, during which Maxwell House spots were incorporated into the plots of the actual radio scripts.

Along with television advertising, Maxwell House used various print campaigns, always featuring the tagline "good to the last drop". The publication of its Passover Haggadah by the Joseph Jacobs Advertising Agency beginning in 1932[8] made Maxwell House a household name with many American Jewish families.[9] This was part of a marketing strategy by advertiser Jacobs, who also hired an Orthodox rabbi to certify that the coffee bean was technically not "kitniyot" (because it was more like a berry than a bean) and, consequently, kosher for Passover. Maxwell House was the first coffee roaster to target a Jewish demographic. The Maxwell House Haggadah is also the Haggadah of choice for the annual White House Passover Seder conducted by President Barack Obama since 2009.[8][10] 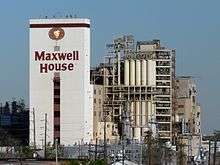 Maxwell House coffee is still produced at two U.S. locations: Jacksonville, Florida, and San Leandro, California. A third plant (the oldest of the group), located in Hoboken, New Jersey, was closed in the early 1990s. Its enormous rooftop sign, proclaiming the brand name and a dripping coffee cup, was a landmark visible in New York City across the Hudson River from Manhattan. The plant was later sold and demolished, and a condominium was subsequently built to occupy the site. A fourth facility, located in Houston, was divested by Kraft Foods to Maximus Coffee Group LP in late 2006. In March 2007, the neon coffee cup sign that glowed like a beacon over the city's East End was removed from the side of the 16-story coffee roaster building.