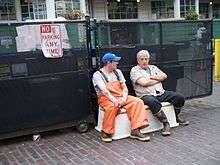 Two men taking a break during their workday 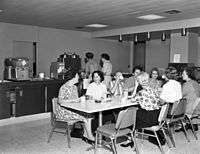 Seattle city employees taking a coffee break in the 1960s.

A break at work is a period of time during a shift in which an employee is allowed to take time off from his/her job. There are different types of breaks, and depending on the length and the employer's policies, the break may or may not be paid.

Meal breaks or lunch breaks usually range from twenty minutes to one hour. Their purpose is to allow the employee to have a meal that is regularly scheduled during the work day. For a typical daytime job, this is lunch, but this may vary for those with other work hours. It is not uncommon for this break to be unpaid, and for the entire work day from start to finish to be longer than the number of hours paid in order to accommodate this time.

When working in a restaurant environment, staff can be required to work up to six hours straight before having a break but must be given at least 20 minutes break for each six hours worked. Employers are not allowed to make a member of their staff take a break earlier in the shift then work more than four consecutive hours or six consecutive hours in one go without a further break; for example, if an employee was working ten hours the company could not give him twenty minutes' break two hours into the shift and then expect the employee to work the rest of the shift without a further break.

According to a study, the amount of time people are taking for lunch breaks in the United States is shrinking, thereby making the term "lunch hour" a misnomer.[1] Some employers request the lunch to be taken at their work station or not offering lunch breaks at all. Many employees are taking shorter lunch breaks in order to compete with other employees for a better position, and to show their productivity.[2]

In some places, such as the state of California, meal breaks are legally mandated.[1] Penalties can be severe for failing to adequately staff one's business premises so that all employees can rotate through their mandatory meal and rest breaks. For example, on April 16, 2007, the Supreme Court of California unanimously affirmed a trial court judgment requiring Kenneth Cole Productions to pay an additional hour of pay for each day that a store manager had been forced to work a nine-hour shift without a break.[3] On April 12, 2012 the Supreme Court of California issued its long-awaited opinion in Brinker Restaurant Corp., et al. v. Superior Court.,[4] which addressed a number of issues that have been the subject of much litigation in California for many years. The California Supreme court ruled that employers satisfy their California Labor Code section 512 obligation to "provide" meal periods to nonexempt employees by (1) relieving employees of all duty; (2) relinquishing control over their activities and permitting them a reasonable opportunity to take an uninterrupted 30-minute break; and (3) not impeding or discouraging them from doing so. Importantly, the court agreed that employers are not obliged to "police" meal breaks to ensure that no work is performed. Even if an employee chooses to work during a properly provided meal period, an employer will not be liable for any premium pay, and will only be liable to pay for the time worked during a meal period so long as the employer knew or reasonably should have known that the employee was working during the meal period.[5]

A short break to allow an employee to use a restroom or WC and will generally last less than 10 minutes. Many employers expect their employees to use the facilities during their regularly scheduled breaks and lunches. Denying employees rights to use the facilities as needed could adversely affect workplace sanitation and workers' health and could create legal issues for both these and other reasons.[6] Employers and co-workers often frown on employees who are seen as taking too many of these breaks, and this could be a cause for progressive discipline from a written warning up to termination. In today's setting however, restroom breaks are generally accepted and not tracked by employers.

A coffee break is a routine social gathering for a snack and short downtime practiced by employees in business and industry, corresponding with the Commonwealth terms "elevenses", "Smoko" (in Australia), "morning tea", "tea break", or even just "tea". An afternoon coffee break, or afternoon tea, sometimes occurs as well.

The origin of the Tea Break as is now incorporated into the law of most countries, stems from research undertaken in England in the early 1900s. Dr A F Stanley Kent, an Oxford graduate and the first Professor of Physiology at University College, Bristol, undertook scientific research on Industrial Fatigue at the request of the Home Office (UK). This work followed the International Congress of Hygiene and Demography held in Brussels in 1903 where a resolution was passed that "the various governments should facilitate as far as possible investigation into the subject of Industrial Fatigue". This was due to its noted bearing on incidence of accidents and excessive sickness. The monotony of work and the effect of alcohol on muscular activity and mental fatigue were also mentioned. The Tea Break came as a direct result of this work.

When Dr Kent was sent by the Home Secretary to stop wartime munitions production as a trial to test the effect of a tea break on productivity, the factory manager refused on the grounds that he had a production schedule within which he must comply. Meeting this challenge, Dr Kent showed the letter from the Home Secretary and observed that if necessary he would have the police called to arrest the manager who blocked the Home Office directive. The results of Dr Kent's study were presented to both Houses of Parliament on 17th August 1915 in an "Interim Report on Industrial Fatigue by Physiological Methods". It was the first time that the government had owned and operated factories and therefore had the right to intervene in their operational methods. Again presenting to both Houses of Parliament on 16th August 1916, Dr Kent read from his "Blue Book" that during his research it had been "possible to obtain information upon...such [matters] as the need to provide canteens in munitions factories, the question of proper feeding of the factory worker, provision of accommodation in factories for the changing and drying of shoes and clothing, and the proper use of appliances provided for ventilating the work-rooms". Dr. Kent undertook much of this research in between work as a research histologist. Among his varied discoveries, Dr Kent discovered the bundle of muscle connecting the auricle with the ventricle which became known as the bundle of His - but came to be latterly known as the A-V bundle.

This history can be verified in Hansard and also through the publication The Black Bag (Journal of the Medical Faculty of Bristol University: Vol IX NO 2. Spring Term 1953) honouring Dr Kent as he approached his 90th birthday.

The coffee break allegedly originated in the late 19th century in Stoughton, Wisconsin, with the wives of Norwegian immigrants. The city celebrates this every year with the Stoughton Coffee Break Festival.[7] In 1951, Time noted that "[s]ince the war, the coffee break has been written into union contracts".[8] The term subsequently became popular through a Pan-American Coffee Bureau ad campaign of 1952 which urged consumers, "Give yourself a Coffee-Break — and Get What Coffee Gives to You."[9] John B. Watson, a behavioral psychologist who worked with Maxwell House later in his career, helped to popularize coffee breaks within the American culture.[10]

Coffee breaks usually last from 10 to 20 minutes and frequently occur at the end of the first third of the work shift. In some companies and some civil service, the coffee break may be observed formally at a set hour. In some places, a "cart" with hot and cold beverages and cakes, breads and pastries arrives at the same time morning and afternoon, an employer may contract with an outside caterer for daily service, or coffee breaks may take place away from the actual work-area in a designated cafeteria or tea room.

More generally, the phrase "coffee break" has also come to denote any break from work.

Snack breaks are usually shorter than meal breaks, and allow an employee to have a quick snack, or to accomplish other personal needs. Similar types of breaks include restroom and smoke breaks. These breaks are also required in the state of California; one 10-15 minute break for every 3.5 hours worked. A few other states have similar laws, but most do not. Some employers allow employees to stop their work for short durations at any time to take care of these needs.

Many companies in the 21st century do not allow smoking on their property, although some employers allow workers to leave the premises to smoke, and some jurisdictions have laws prohibiting smoking in an enclosed place where others are employed. Smoke breaks can be of different lengths but for the most part are shorter than lunch breaks. Some employers are very strict about smoking. A criticism of smoking breaks is that non-smoking employees do not receive the small respite because they simply do not smoke. To certain working environments, however, smoking breaks are widely accepted and seen by some as a good way to network with colleagues (and the management).