Mayberry R.F.D. is an American television series produced as a spin-off and direct continuation of The Andy Griffith Show. When star Andy Griffith decided to leave his series, most of the supporting characters returned for the new program, which ran for three seasons (78 episodes) on the CBS Television Network from 1968–1971.[1]

During the final season of The Andy Griffith Show, widower farmer Sam Jones (Ken Berry) and his young son Mike (Buddy Foster) are introduced and gradually become the show's focus. Sheriff Andy Taylor takes a backseat in the storylines, establishing the sequel series. The show's first episode, "Andy and Helen's Wedding", had the highest ratings in recorded television history (up to premiere date in 1968). Sheriff Taylor and newlywed wife Helen make guest appearances on Mayberry R.F.D. until late 1969 and then relocate with Opie. Mayberry R.F.D. (which stands for Rural Free Delivery) was popular throughout its entire run, but was canceled after its third season in CBS's "rural purge" of 1971.[2] 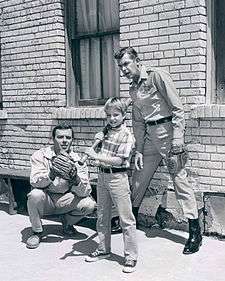 Sam and Andy give Mike a hand with his swing, 1968

Father and son stories involving Sam and Mike Jones are reminiscent of the parent series. Both characters are introduced in the last season of The Andy Griffith Show (TAGS), beginning with Sam's election as head of the town council. Most of town folk from TAGS reprise their roles in the sequel. Loyal Mayberry citizens Goober Pyle (George Lindsey), Clara Edwards (Hope Summers), Emmett Clark (Paul Hartman) and Howard Sprague (Jack Dodson) are seen regularly.

Sheriff Andy Taylor and his sweetheart, Helen Crump (Aneta Corsaut), marry in the sequel's first episode. Both make additional appearances (mostly Andy), then leave the series in late 1969 with a move to Raleigh, North Carolina, as the explanation. Aunt Bee (Frances Bavier) becomes Sam's housekeeper but leaves after the second season to be replaced by Sam's cousin, Alice Cooper (Alice Ghostley). Don Knotts and Ronny Howard as Barney Fife and Opie Taylor respectively, appear in the first episode. Actress Arlene Golonka (who played Howard Sprague's sweetheart Millie Hutchins/Swanson in the Griffith show) becomes Sam's love interest in the sequel. A recurring black character named Ralph (Charles Lampkin) lives with a teen daughter and pre-teen son next to the Jones farm.

An NBC reunion movie, Return to Mayberry, was produced in 1986 and featured many original performers from TAGS. Ken Berry, Buddy Foster and Arlene Golonka don't appear in the movie, nor do TAGS regulars Frances Bavier, Elinor Donahue, and Jack Burns. Nevertheless, Return does share continuity with the R.F.D. storyline, by maintaining that Andy and Helen are married. However, Andy and Helen's son, Andy Jr. is never mentioned. 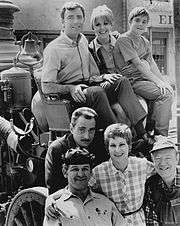 NOTE: The highest average rating for the series is in bold text.

The social upheaval that occurred during The Andy Griffith Show's final 1968 season (including the Vietnam stalemate, student and street protests, the slayings of Martin Luther King, Jr. and Bobby Kennedy and racial riots) had much of the nation wistful for a more stable, idealistic America. The final episode of The Andy Griffith Show was titled "Mayberry RFD", which added an Italian-American family to the Sam Jones homestead. The series bowed out as the number one-rated show. The producers, however, chose to forgo a big overhaul and instead stuck with the winning premise of a widower, his son and the matronly Aunt Bee. Therefore, the series was much the same as The Andy Griffith Show, absent Andy Taylor and son Opie.

Mayberry R.F.D. was number four in the Nielsen ratings the first two years of its run. While its ratings were strong enough for renewal at the end of its third season (number 15), it was canceled despite public complaints. That year CBS, seeking a more urban image, canceled all its rural-themed shows including Green Acres, Hee Haw and The Beverly Hillbillies in what became known as the "rural purge".