The 2011 iteration of Mayhem Festival was notable as the first year in which the tour utilized multiple acts to fill the opening slot on the Main stage on different ranges of days. Machine Head opened the Main stage from the tour's onset until July 20, Trivium performed from July 22 to August 2, and In Flames played from August 3 until they dropped off the tour. While one band opened the main stage, the other two instead performed as headliners on the Jägermeister Mobile Stage and Revolver Stage.[2]

In Flames drops off festival

On July 31, Swedish band In Flames announced that they would not be able to continue touring with the festival by posting this on their official website: "It is with huge regret that today with immediate effect In Flames must cancel their current US shows as part of the Mayhem tour and their own US Headline shows. But due to a serious terminal illness of one the band's immediate family members they feel they have no option. We have had the most amazing and fun times as part of the Mayhem tour and we are truly grateful for all the support the whole festival has shown. We will be back at the start of 2012. Once again our apologies"[3] 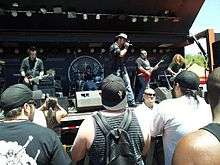