Unearth is an American metalcore band from Boston, Massachusetts. Formed in 1998, the group has released six studio albums.

Unearth was formed by Trevor Phipps, Buz McGrath, Ken Susi, Mike Rudberg, and Chris Rybicki in Lynn, Massachusetts in 1998. The band began as Point 04 (containing McGrath, Rudberg, and Rybicki), and Susi was recruited soon afterwards. The band attempted to recruit Phipps while he recovered from appendicitis, but Phipps was reluctant to join. However, when Phipps showed up to a jam session for one of Susi's side bands, Unearth was practicing instead, and Phipps agreed to join after hearing the song "Shattered by the Sun." The name "Unearth" was coined by drummer Mike Rudberg as he wanted the band to "Unearth" a new sound in the metal and hardcore world. On the small independent label, Endless Fight Records, they released their first EP called Above the Fall of Man in May 1999. Unearth then signed to Eulogy Recordings to release The Stings of Conscience in 2001 and the Endless EP in 2002. During the process of Endless, Chris Rybicki left the group and was replaced by John Maggard.

After playing tours and festivals like the New England Metal and Hardcore Festival with Unearth, Mike Rudberg departed from the group days after their performance at The SXSW in 2003, having performed the show in the nude.[2] Also Buz McGrath left for personal problems but came back shortly after. The rest of Unearth would then use Tim Mycek of Sworn Enemy as temporary replacement drummer and Kia Eshghi of Rumi on guitar. Before Buz returned, Mike Martin from All That Remains also filled in for him. After Buz's return, Adam D from Killswitch Engage also filled in on drums for the last 2 months of the year.

With Buz McGrath and new permanent drummer Mike Justian, of The Red Chord and previously post-hardcore band Hassan I Sabbah, Unearth released The Oncoming Storm through Metal Blade Records on June 29, 2004. That summer, they played at Ozzfest and would later begin touring with Killswitch Engage, Shadows Fall, and Lamb of God for MTV's Headbangers Ball United States tour. They would also tour with Slipknot the next year. In 2005, Unearth performed in the first ever Sounds of the Underground tour with numerous bands like Norma Jean, Gwar, and All That Remains.

In early 2006, they began writing their next album. After the writing process, they recorded III: In the Eyes of Fire with well-known heavy metal producer Terry Date at Seattle. This latest coup was yet another landmark in their blossoming career, a fact the band were quick to acknowledge: "Working with Terry Date is another amazing feat for us on a growing list of accomplishments".[3] As they finished their latest album, they performed at Ozzfest for the second time, including songs from the album even though it was not destined for release until August 8, 2006. During the release, they began their headlined Sanctity of Brothers tour with Bleeding Through, Animosity, Through the Eyes of the Dead and Terror. After participating in Japan's Loud Park festival, Unearth and Slayer toured together all around the U.S. in early 2007 on the Christ Illusion tour. They headlined a European tour in the beginning of 2007 with Job for a Cowboy, Despised Icon, and DÅÅTH. Which was followed by a U.S. & Canadian tour with Dimmu Borgir, DevilDriver and Kataklysm that began in the middle of April. It was during this tour that drummer Mike Justian was fired from the band for numerous reasons. To fill in for the rest of the tour, Gene Hoglan of Strapping Young Lad was recruited. They played in the 2007 Download Festival with Seemless/Kingdom of Sorrow/studio drummer Derek Kerswill who has since joined the band officially.

The band's live DVD Alive from the Apocalypse was released on March 18, 2008, and debuted at No. 13 on the Billboard Top Music Video Chart, with sales around 1,800. It was also certified gold in Canada a week after its release. 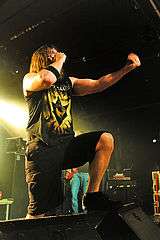 On October 14, 2008, Unearth released their fourth album, entitled The March. The album features a re-recorded version of the song "The Chosen", which they contributed to the album Aqua Teen Hunger Force Colon Movie Film for Theaters Colon the Soundtrack. The band recently completed a tour with Gwen Stacy, The Acacia Strain, Whitechapel and Protest the Hero. They have completed the Never Say Die Club Tour with Parkway Drive, Architects, Despised Icon, Protest the Hero, Whitechapel and Carnifex. They have also completed the Metal Hammer Defenders of the Faith tour with other acts such as Lamb of God, Dimmu Borgir and Five Finger Death Punch

As of early 2009, it has been confirmed that The March has sold more than 100,000 copies worldwide.[4] In March 2010, Unearth confirmed that they will be playing the Download Festival opening the festival on the Maurice Jones Stage (formerly known as Main Stage) along with Killswitch Engage, 36 Crazyfists and Them Crooked Vultures.

On September 20, 2010 it was announced that former bassist, Chris Rybicki was killed in a car accident caused by an intoxicated woman. He was 39 years old.[5]

On October 25, 2010, Unearth issued a statement saying they and Derek Kerswill had amicably parted ways. The band stated there is no bad blood towards Kerswill, and that the situation is purely based on musical differences. Justin Foley will fill in for drums for their new album.

Unearth completed a North American tour with As I Lay Dying, All That Remains and Carnifex and headed to Europe for the 10-day "Persistence Tour" in December 2010.

In January 2011 the band entered the studio to work on their fifth studio album entitled "Darkness in the Light," which was later released on July 5, 2011. The album was produced by Times of Grace and Killswitch Engage's guitar player Adam Dutkiewicz and drums were tracked by Killswitch Engage's drummer Justin Foley. On the Metal Injection LiveCast on Wednesday, April 13 Buz McGrath was the special guest. He discussed the new album and mentioned a possible release date. He mentioned that it was vocalist's Trevor Phipps best effort on all the Unearth albums.

On January 31, 2011, the band was announced to be a part of the 2011 Mayhem Festival on the Jägermeister stage. Among the other bands billed for this tour were Disturbed, Godsmack, Megadeth, In Flames, Trivium, and Machine Head.[6]

In 2013, Unearth was a part of the Brothers Of Brutality tour headlined by Whitechapel and Emmure. John did not perform this tour due to personal matters. Matt DeVries took over until his return.

During fall 2014, Unearth released two tracks from their new album Watchers of Rule, which was later released on October 28, 2014 via eOne Music and features 11 tracks on the regular edition and 13 tracks on the deluxe version.

In an interview with Noisefull, lead guitarist Buz McGrath revealed that the band currently has an open bass player position, confirming that John 'Slo' Maggard (who had been missing from touring for the last two years and did not contribute to Watchers of Rule) is no longer in the band. [7] DeVries, who had performed live bass on all but one tour since the start of 2013, also chose to end his association with the band (and indeed stepped out of music altogether) at year's end, with Chris O'Toole being selected as a live fill-in afterward.

Band members mentioned in an interview with Metal Hammer that their key influences are Pantera, Slayer, Metallica, Earth Crisis, In Flames, and At the Gates.[8][9] In an interview on MTV Headbangers Ball, the band also accepted influences from Anthrax, Testament and Iron Maiden. Unlike many other popular modern metalcore bands, Unearth rarely use clean vocals on their studio albums.