A prescription (symbol: ℞, representing the Latin imperative verb, recipe = take, take thou) is a health-care program implemented by a physician or other qualified health care practitioner in the form of instructions that govern the plan of care for an individual patient.[1] The term often refers to a health care provider's written authorization for a patient to purchase a prescription drug from a pharmacist. 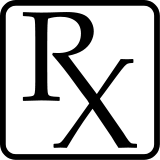 '℞' is a symbol meaning "prescription". It is sometimes transliterated as "Rx" or just "Rx". This symbol originated in medieval manuscripts as an abbreviation of the Late Latin verb recipe, the imperative form of recipere, "to take" or "take thus".[3] Literally, the Latin word recipe means simply "Take...!" and medieval prescriptions invariably began with the command to "take" certain materials and compound them in specified ways.[4]

Folk theories about the origin of the symbol '℞' note its similarity to the Eye of Horus,[5][6] or to the ancient symbol for Zeus or Jupiter, (♃), gods whose protection may have been sought in medical contexts.[7]

The word "prescription", from "pre-" ("before") and "script" ("writing, written"), refers to the fact that the prescription is an order that must be written down before a compound drug can be prepared. Those within the industry will often call prescriptions simply "scripts".

In certain states medical marijuana legislation has been drafted calling for a health care professional's written or oral "recommendation", in the belief that a written one would be legally distinguishable from a prescription, but since written advice to a patient is what a prescription is, that belief is mistaken. Jurisdictions may adopt a statutory definition of "prescription" that applies as a term of art only to the operation of that statute (see below about prescriptions that may legally be filled with prescription-only items), but the general legal definition of the word is this broad one. 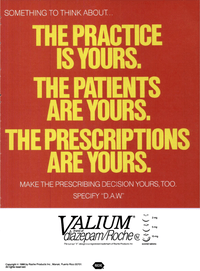 In some countries, drug companies use direct-to-prescriber advertising in an effort to convince prescribers to dispense as written with brand-name products rather than generic drugs.

Many brand name drugs have cheaper generic drug substitutes that are therapeutically and biochemically equivalent. Prescriptions will also contain instructions on whether the prescriber will allow the pharmacist to substitute a generic version of the drug. This instruction is communicated in a number of ways.

Some prescribers further inform the patient and pharmacist by providing the indication for the medication; i.e. what is being treated. This assists the pharmacist in checking for errors as many common medications can be used for multiple medical conditions.

Some prescriptions will specify whether and how many "repeats" or "refills" are allowed; that is whether the patient may obtain more of the same medication without getting a new prescription from the medical practitioner. Regulations may restrict some types of drugs from being refilled.

In group practices, the preprinted portion of the prescription may contain multiple prescribers' names. Prescribers typically circle themselves to indicate who is prescribing or there may be a checkbox next to their name.

National or local (i.e. state or provincial) legislation governs who can write a prescription. In the United States, physicians (either M.D., D.O. , or D.P.M) have the broadest prescriptive authority. All 50 states and the District of Columbia allow licensed certified Physician Assistants (PAs) prescription authority (with some states, limitations exist to controlled substances). All 50 states allow registered certified nurse practitioners and other advanced practice registered nurses (such as certified nurse-midwives) prescription power (with some states including limitations to controlled substances).[11][12] Many other healthcare professions also have prescriptive authority related to their area of practice. Veterinarians and dentists have prescribing power in all 50 states and the District of Columbia. Clinical pharmacists are allowed to prescribe in some states through the use of a drug formulary or collaboration agreements. Florida pharmacists can write prescriptions for a limited set of drugs.[13] In all states, optometrists prescribe medications to treat certain eye diseases, and also issue spectacle and contact lens prescriptions for corrective eyewear.[14] Several states have passed RxP legislation, allowing clinical psychologists (PhDs or PsyDs) who are registered as medical psychologists and have also undergone specialized training in script-writing to prescribe drugs to treat emotional and mental disorders. Chiropractors may have the ability to write a prescription, depending on scope of practice laws in a jurisdiction.

In August 2013, legislative changes in the UK allowed physiotherapists and podiatrists to have independent prescribing rights for licensed medicines that are used to treat conditions within their own area of expertise and competence.[15]

Prescriptions, when handwritten, are notorious for being often illegible. In the US, illegible handwriting is at least indirectly responsible for the deaths of 7,000 people annually, according to a July 2006 report from the National Academies of Science's Institute of Medicine (IOM). Historically, physicians used Latin words and abbreviations to convey the entire prescription to the pharmacist. Today, many of the abbreviations are still widely used and must be understood to interpret prescriptions. At other times, even though some of the individual letters are illegible, the position of the legible letters and length of the word is sufficient to distinguish the medication based on the knowledge of the pharmacist. When in doubt, pharmacists call the medical practitioner. Some jurisdictions have legislated legible prescriptions (e.g. Florida).[16] Some have advocated the elimination of handwritten prescriptions altogether[17] and computer printed prescriptions are becoming increasingly common in some places.

Over the years, prescribers have developed many conventions for prescription-writing, with the goal of avoiding ambiguities or misinterpretation.[18][19][20] These include:

Many abbreviations are derived from Latin phrases. Hospital pharmacies have more abbreviations, some specific to the hospital. Different jurisdictions follow different conventions on what is abbreviated or not. Prescriptions that do not follow area conventions may be flagged as possible forgeries.

Some abbreviations that are ambiguous, or that in their written form might be confused with something else, are not recommended and should be avoided. These are included in a separate list in Appendix 1. However, all abbreviations carry an increased risk for confusion and misinterpretation and should be used cautiously. 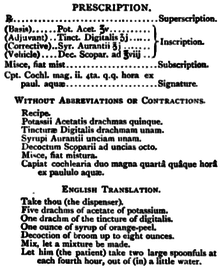 An example prescription from 1907.

In continental Europe, prescriptions differ from their counterparts in the Anglosphere. With the exception of patient directions, they are written out entirely in abbreviations deriving from the Latin language. Furthermore, a larger proportion of prescriptions are compounded, and appropriate abbreviations and phrases exist for this. Many medical schools require up to two years of Latin as part of the curriculum for medical doctors and pharmacists.

Parts of a European prescription

In emergency situations, a prescription pad may not be available. In this situation, any piece of paper will do, provided it is marked Periculum in mora!; that is, danger in delay (other designations, such as Cito! or Statim!, are also used and understood). Such ad-hoc prescriptions have a limited period of validity; typically, this is the day after the prescription is written.

A doctor may self-prescribe, or prescribe for his family; this is done by replacing the signatura by the Latin phrase pro manus medici (for medical hands) or ad usum proprium (for own use). This is to be done with caution; certain drugs self-prescribed will arouse suspicion, and may result in investigation by the medical board or another governmental body.

Brand-name drugs may be swapped for generics; if this is not wanted by the doctor, he may write dispense as written in the local language on the prescription.

Prescribers will often use blank prescriptions as general letterhead. Legislation may define certain equipment as "prescription devices".[22] Such prescription devices can only be used under the supervision of authorized personnel and such authorization is typically documented using a prescription. Examples of prescription devices include dental cement (for affixing braces to tooth surfaces), various prostheses, gut sutures, sickle cell tests, cervical cap and ultrasound monitor.

In some jurisdictions, hypodermic syringes are in a special class of their own, regulated as illicit drug use accessories[23] separate from regular medical legislation. Such legislation will often specify a prescription as the means by which one may legally possess syringes.

Related usage of the term prescription

The concept of prescriptions dates back to the beginning of history. So long as there were medications and a writing system to capture directions for preparation and usage, there were prescriptions.[24]

The superscription section contains the date of the prescription and patient information (name, address, age, etc.). The symbol "℞" separates the superscription from the inscriptions sections. In this arrangement of the prescription, the "℞" is a symbol for recipe or literally the imperative "take!" This is an exhortation to the pharmacist by the medical practitioner, "I want the patient to have the following medication"[28] – in other words, "take the following components and compound this medication for the patient."

The subscription section contains dispensing directions to the pharmacist. This may be compounding instructions or quantities.

The signature section contains directions to the patient[30] and is often abbreviated "Sig."[31] or "Signa."[32] It also obviously contains the signature of the prescribing medical practitioner though the word signature has two distinct meanings here and the abbreviations are sometimes used to avoid confusion.

Thus sample prescriptions in modern textbooks are often presented as:

A pharmacy chain is often linked together through corporate headquarters with computer networking. Walgreens, for example, uses satellite technology to share patient information. A person who has a prescription filled at one Walgreens can get a refill of that prescription at any other store in the chain, as well as have their information available for new prescriptions at any Walgreens.

Some online pharmacies also offer services to customers over the internet. Walgreens' web site, for example, allows customers to order refills for medicine over the internet, and allows them to specify the store that they will pick up the medicine from. Their web site also allows consumers to look up their prescription history, and to print it out.

Many pharmacies now offer services to ship prescription refills right to the patient's home. CVS, for example, will ship refills free of charge. They also offer mail service where you can mail in a new, original prescription and a signed document, and they will ship the filled prescription back to you.

Pharmacy information systems are a potential source of valuable information for pharmaceutical companies as it contains information about the prescriber's prescribing habits. Prescription data mining of such data is a developing, specialized field.[34]

Many prescribers lack the digitized information systems that reduce prescribing errors.[35] To reduce these errors, some investigators have developed modified prescription forms that prompt the prescriber to provide all the desired elements of a good prescription. The modified forms also contain pre-defined choices such as common quantities, units and frequencies that the prescriber may circle rather than write out. Such forms are thought to reduce errors, especially omission and handwriting errors and are actively under evaluation. (See: Kennedy AG, Littenberg B. A Modified Outpatient Prescription Form to Reduce Prescription Errors. Joint Commission Journal of Quality and Safety 2004; 30:480-487.)