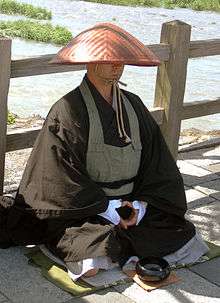 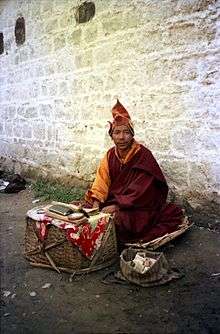 Mendicant monk at base of Potala Palace, Lhasa, Tibet, 1993 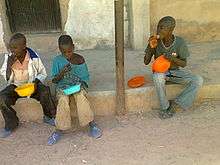 Almajiri Mendicants eating food they begged for from houses

A mendicant (from Latin: mendicans, "begging") is one who practices mendicancy (begging) and relies chiefly or exclusively on charitable donations to survive. In principle, mendicant religious orders do not own property, either individually or collectively, and members have taken a vow of poverty, in order that all their time and energy could be expended on practicing or preaching and serving the poor. It is a form of asceticism.

Many religious orders adhere to a mendicant way of life, including the Catholic mendicant orders, Hindu ascetics, some dervishes of Sufi Islam, and the monastic orders of Jainism and Buddhism. In the Catholic Church, followers of Saint Francis of Assisi and Saint Dominic became known as mendicants, as they would beg for food while they preached to the villages.

While mendicants are the original type of monks in Buddhism and have a long history in Indian Hinduism and the countries which adapted Indian religious traditions, they didn't become widespread in Christianity until the High Middle Ages. The Way of a Pilgrim depicts the life of an Eastern Christian mendicant.