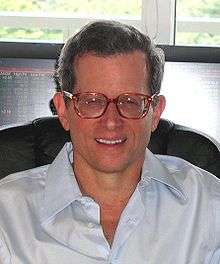 Michael Marcus at his trading office.

Marcus began his trading career in 1972, when he bought plywood futures with his life savings of $700. In the summer of 1972 President Richard Nixon froze prices of some commodities, but the futures contracts rallied sharply, increasing Marcus' stake from $700 into $12,000. In 1973 he turned $24,000 into $64,000. He also used Freight derivatives.

Marcus learned money management from Ed Seykota, whom he met while working as an analyst.[2] He was a founding trader of Commodities Corporation, where he was chief currency trader and hired and taught Bruce Kovner as a trader.[2][3] Marcus blamed the ending of his first marriage on his having to check the markets every two hours throughout the night.[4] Marcus eventually became an EVP at Commodities Corporation. Marcus has recently invested in small-company stock through his holding company Canmarc Trading Co and later made private-placement investments in small OTC Bulletin Board listed companies like Prospector Consolidated Resources[5] and Encore Clean Energy Inc[5] and Pink Sheets Touchstone Resources.

Marcus was featured by Thomas A Bass, in the book The Predictors: How a Band of Maverick Physicists Used Chaos Theory to Trade Their Way to a Fortune on Wall Street.[6] Additionally, Marcus was interviewed by Jack Schwager in the book Market Wizards. Marcus was described as a chartist who "keeps an eye on market penetration and resistance."

He graduated in 1969 Phi Beta Kappa from Johns Hopkins and studied Psychology at Clark University.[2] At one time he was a devout follower of the Maharishi Mahesh Yogi.[1]