Mullen previously served as the Navy's 28th Chief of Naval Operations from July 22, 2005, to September 29, 2007. He was only the third officer in the Navy's history to be appointed to four different four-star assignments;[2] the other appointments being the Commander, U.S. Naval Forces Europe and Commander, Allied Joint Force Command Naples from October 2004 to May 2005, and as the 32nd Vice Chief of Naval Operations from August 2003 to August 2004. As Chairman, Mullen was the highest-ranking officer in the United States Armed Forces. He retired from the Navy after over 43 years of service. Mullen is now a Professor at Princeton University.

Along with his congeniality, [he] displayed fine leadership qualities. With his well rounded personality, his enthusiasm, and his desire to do his best, Navy-Air is indeed getting an outstanding officer.

Mullen at the Pentagon during the September 11 attacks in 2001

In 1985, Mullen graduated from the Naval Postgraduate School in Monterey, CA, with a Master of Science degree in Operations Research, and in 1991, he completed the Harvard Business School Advanced Management Program.

He was recognized by his peers in 1987 with the Vice Admiral James Bond Stockdale Award for Inspirational Leadership skill.[9] He is one of 53 naval officers to be recognized by this award since its inception in 1980.

President George W. Bush (at lectern) announces the nominations of Mullen (second from left) and James Cartwright (far left) to be Chairman and Vice Chairman of the Joint Chiefs of Staff, respectively, on June 28, 2007, at the Roosevelt Room of the White House.

Mullen (left) with Rear-Admiral Ronnie Tay, Chief of the Republic of Singapore Navy, in 2007

Mullen poses with a member of the U.S. Air Force during a USO visit to Southwest Asia, March 2010

Mullen photographed with President Obama and other members of the U.S. national security team watching the events of Operation Neptune's Spear unfold, on May 1, 2011

As Commander, Allied Joint Force Command Naples, Mullen had operational responsibility for NATO missions in the Balkans, Iraq, and the Mediterranean. As Commander, U.S. Naval Forces Europe, he was responsible for providing overall command, operational control, and coordination of U.S. naval forces in the European Command area of responsibility. He assumed these duties on October 8, 2004, and was relieved of them upon his becoming Chief of Naval Operations.

On October 29, 2006, the Honolulu Advertiser published an op-ed by Mullen that defined the concept of the 1,000-ship navy.[10] However Admiral Gary Roughead, Mullen's successor as Chief of Naval Operations, rejected Mullen's concept in favor of a more inclusive vision that includes non-governmental organizations and cooperation with non-allied countries.[11]

On June 8, 2007, Secretary of Defense Robert M. Gates announced that he would advise President George W. Bush to nominate Mullen to succeed General Peter Pace as Chairman of the Joint Chiefs of Staff;[12] Bush announced the nomination formally on June 28, 2007.[13]

On August 3, 2007, the U.S. Senate confirmed Mullen as the Chairman of the Joint Chiefs of Staff.[14] Mullen was sworn in on October 1, 2007. Upon taking office, Mullen became the first naval officer to hold the Chairman's position since Admiral William Crowe, who served as Chairman prior to the enactment of the Goldwater-Nichols Act in 1986, and who was the immediate predecessor to Army general and later United States Secretary of State Colin Powell.

On March 18, 2009, Gates recommended to President Barack Obama that Mullen be re-nominated for a second term as chairman of the Joint Chiefs.[15] He was unanimously confirmed by the Senate on September 25, 2009[16] and began his second term on October 1, 2009.

On February 2, 2010, Mullen and Gates said that they fully supported President Obama’s decision to end the "Don't ask, don't tell" law, which prevented openly gay people from serving in the military. “It is my personal belief that allowing gays and lesbians to serve openly would be the right thing to do,” Mullen said at a Senate Armed Services Committee hearing. “No matter how I look at the issue...I cannot escape being troubled by the fact that we have in place a policy which forces young men and women to lie about who they are in order to defend their fellow citizens...For me, it comes down to integrity – theirs as individuals and ours as an institution.”

2007 Senate testimony regarding the Iraq War

During Mullen's Senate confirmation hearings for his first term nomination as Chairman of the Joint Chiefs of Staff, Mullen identified political progress in Iraq as a critical component of Iraq policy.[17] He noted that, "there does not appear to be much political progress" in Iraq.[17] He also said, "If [the Iraqis] aren't making progress in [the political] realm, the prospects for movement in a positive direction are not very good. Failure to achieve tangible progress toward [political] reconciliation requires a strategic reassessment."[17] Mullen further told the Senate that the United States needs to "bring as much pressure on [Iraq's political leaders] as [the U.S.] possibly can."[17]

Regarding the length and scope of the U.S. involvement in Iraq, Mullen told the Senate that while he does not envision permanent U.S. bases in Iraq, "vital interests in the region and in Iraq require a pragmatic, long-term commitment that will be measured in years, not months."[17]

President Obama, Secretary of Defense Panetta and Admiral Mullen provided the certification required by the Act to Congress on July 22, 2011. Implementation of repeal was completed 60 days later, so that DADT was no longer policy as of September 20, 2011.

Views on use of military force

In a speech at Kansas State University,[18] Mullen outlined his views about the best application of military force in present times. He characterized most wars, such as World War II, as wars of attrition, where the reduction or elimination of enemy forces signaled victory. He characterized the Cold War as an issue of containment. In characterizing the current wars in Iraq and Afghanistan, he described them as "a fight against a syndicate of Islamic extremists led by al-Qaeda and supported by a host of both state and non-state actors", citing the border between Afghanistan and Pakistan as their "epicenter".

Mullen outlined three principles about the "proper use of modern military forces":

President Barack Obama nominated General Martin E. Dempsey as the next chairman of the Joint Chiefs of Staff on Memorial Day. Dempsey had been sworn in as Army chief of staff the previous month. On September 30, 2011, Mullen officially retired from the military when his term as Chairman ended.

In December 2012, one year into his retirement, the Admiral was in the news again, for having been the target of a computer hacking, a situation that led to subsequent FBI investigations.[19] In 2013, Mullen joined the board of General Motors.[20]

On July 11, 2013, Mullen was put on the Board of Directors of Sprint Nextel Corp (NYSE:S) directly after a buyout from SoftBank, one of Japan's largest cellular companies.[21] Mullen was vetted by Michael Bloomberg to be his running mate in the United States Presidential Election, 2016, but Bloomberg decided against running.[22] 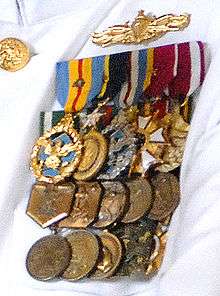 In 1987, Mullen was awarded the Vice Admiral James Bond Stockdale Award for Inspirational Leadership.[9] In 2009 the U.S. veterans group Soldier On awarded Admiral Mullen the first Soldier On Award, created for them by sculptor Andrew DeVries.[27] The Soldier On Award recognizes individuals whose leadership and actions have advanced the goal of ending veteran homelessness.[28]

In 2010, he was appointed an Honorary Officer of the Order of Australia.[29]

An auditorium was dedicated in his name March 1, 2012, before a graduation ceremony at the Surface Warfare Officers School in Newport, Rhode Island.[30] 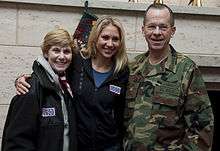 Mullen is married to Deborah and together they have two sons, LT John Stewart Mullen, and LT Michael Edward Mullen, who also both attended Annapolis and now serve as commissioned officers in the U.S. Navy.[23]