For the South Korean group, see Joint Chiefs of Staff (Republic of Korea).

The Joint Staff (JS) is a headquarters staff in the Pentagon, composed of personnel from each of the four Department of Defense armed services, that assists the Chairman and the Vice Chairman in discharging their responsibilities and is managed by the Director of the Joint Staff (DJS), who is a lieutenant general or Navy vice admiral.[9] 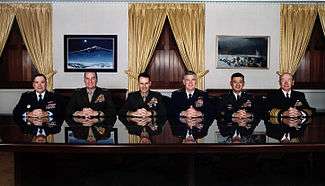 The Joint Chiefs of Staff at the Pentagon in December 2001.

After the 1986 reorganization of the military undertaken by the Goldwater-Nichols Act, the Joint Chiefs of Staff does not have operational command of U.S. military forces. Responsibility for conducting military operations goes from the President to the Secretary of Defense directly to the commanders of the Unified Combatant Commands and thus bypasses the Joint Chiefs of Staff completely.

Today, their primary responsibility is to ensure the personnel readiness, policy, planning and training of their respective military services for the combatant commanders to utilize. The Joint Chiefs of Staff also act in a military advisory capacity for the President of the United States and the Secretary of Defense. In addition, the Chairman of the Joint Chiefs of Staff acts as the chief military advisor to the President and the Secretary of Defense. In this strictly advisory role, the Joint Chiefs constitute the second-highest deliberatory body for military policy, after the National Security Council and the Homeland Security Council, which includes the President and other officials besides the Chairman of the Joint Chiefs.

Current members of the Joint Chiefs of Staff

As the military of the United States grew in size following the American Civil War, joint military action between the U.S. Army and U.S. Navy became increasingly difficult. The Army and Navy were unsupportive of each other at either the planning or operational level and were constrained by disagreements during the Spanish–American War in the Caribbean campaigns.[12] The Joint Army and Navy Board was established in 1903 by President Theodore Roosevelt, comprising representatives from the military heads and chief planners of both the Navy's General Board and the Army's General Staff. The Joint Board acting as an "advisory committee" was created to plan joint operations and resolve problems of common rivalry between the two services.[12]

Yet, the Joint Board accomplished little as its charter gave it no authority to enforce its decisions. The Joint Board also lacked the ability to originate its own opinions and was thus limited to commenting only on the problems submitted to it by the Secretaries of War and Navy. As a result, the Joint Board had little to no impact on the manner the United States conducted World War I.

After World War I, in 1919 the two Secretaries agreed to reestablish and revitalize the Joint Board. The mission of the General staff was to develop plans for mobilization for the next war; the US was always designated "Blue" and potential enemies were assigned various other colors.[13]

President of the United States Franklin D. Roosevelt and Prime Minister of the United Kingdom Winston Churchill established the Combined Chiefs of Staff (CCS) during the 1942 Arcadia Conference.[14] The CCS would serve as the supreme military body for strategic direction of the combined US-British Empire war effort.

The UK portion of the CCS would be composed of the British Chiefs of Staff Committee, but the United States had no equivalent body. The Joint Board's lack of authority made it of little use to the CCS, although its 1935 publication, Joint Action of the Army and Navy, did give some guidance for the joint operations during World War II. The Joint Board had little influence during the war and was ultimately disbanded in 1947.

As a counterpart to the UK's Chiefs of Staff Committee in the CCS, and to provide better coordinated effort and coordinated staff work for America's military effort, Admiral William D. Leahy proposed a "unified high command" in what would come to be called the Joint Chiefs of Staff. Modeled on the British Chiefs of Staff Committee, the JCS' first formal meeting was held on 9 February 1942, to coordinate U.S. military operations between War and Navy Departments.[14][15] The official history of the Army Air Forces noted that although there was "no official charter establishing this committee...by the end of February it had assumed responsibilities toward the American war effort comparable to the CCS on the combined level."[16] On 20 July 1942, Admiral Leahy became the Chief of Staff to the Commander in Chief of the Army and Navy ("Commander in Chief of the Army and Navy of the United States" is the military title of the U.S. President, per Article II, § 2, of the Constitution), with the chiefs of staff of the services serving under his leadership.

The first members of the Joint Chiefs of Staff were:[17]

As the table indicates, each of the members of the original Joint Chiefs was a four-star flag officer in his respective service branch. By the end of the war, however, each had been promoted: Leahy and King to Fleet Admiral; Marshall and Arnold to General of the Army. Arnold was later appointed to the grade of General of the Air Force. 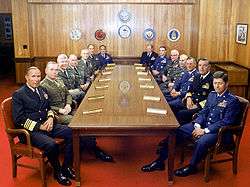 The Joint Chiefs of Staff and several Commanders in Chief gathered at the Pentagon on 1 July 1983.

With the end of World War II, the Joint Chiefs of Staff was officially established under the National Security Act of 1947. Per the National Security Act, the JCS consisted of a chairman, the Chief of Staff of the Army, the Chief of Staff of the Air Force (which was established as a separate service by the same Act), and the Chief of Naval Operations. The Commandant of the Marine Corps was to be consulted on matters concerning the Corps, but was not a regular member; General Lemuel C. Shepherd, Jr., Commandant in 1952–55, was the first to sit as an occasional member. The law was amended during the term of General Louis H. Wilson, Jr. (1975–79), making the Commandant a full-time JCS member in parity with the other three DoD services.

The position of vice-chairman was created by the Goldwater–Nichols Act of 1986 to complement the CJCS, as well as to delegate some of the chairman's responsibilities, particularly resource allocation through the Joint Requirements Oversight Council (JROC).

A provision in the 2012 National Defense Authorization Act added the Chief of the National Guard Bureau to the Joint Chiefs of Staff. Guard historians called it the "most significant development" for the National Guard since the Militia Act of 1903.[1]

Main article: Chairman of the Joint Chiefs of Staff

The current chairman is General Joseph Dunford, USMC, who began his term on October 1, 2015.

On 20 July 1942, Navy Fleet Admiral William D. Leahy became the Chief of Staff to the Commander in Chief of the Army and Navy (20 July 1942 – 21 March 1949). He was not technically the Chairman of the Joint Chiefs of Staff. Leahy's office was the precursor to the post of Chairman of the Joint Chiefs of Staff. That post was established and first held by General of the Army Omar Bradley in 1949.

Main article: Vice Chairman of the Joint Chiefs of Staff

Senior Enlisted Advisor to the Chairman 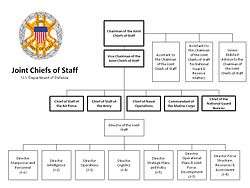 The Joint Staff Organization Chart as of January 2012. 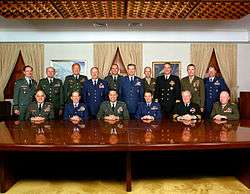 The Joint Chiefs of Staff (seated) and the directors of the Joint Staff directorates (standing), November 1989.

The Joint Staff (JS) is a military headquarters staff based at the Pentagon, composed of personnel from all the four DoD services, assisting the Chairman and the Vice Chairman in discharging their responsibilities. They work closely with the Office of the Secretary of Defense (OSD), the Military Department staffs, and the Combatant Command Staffs.

The Chairman of the Joint Chiefs of Staff is assisted by the Director of the Joint Staff, a three-star officer who assists the chairman with the management of the Joint Staff, an organization composed of approximately equal numbers of officers contributed by the Army, the Navy and Marine Corps, and the Air Force, who have been assigned to assist the chairman in providing to the Secretary of Defense unified strategic direction, operation, and integration of the combatant land, naval, and air forces.

Directorates of the Joint Staff

The Joint Staff includes the following departments where all the planning, policies, intelligence, manpower, communications and logistics functions are translated into action.[23]

The Joint Chiefs may recognize private citizens, organizations or career civilian government employees for significant achievements provided to the joint community with one of the following decorations / awards.[28]

Although the Coast Guard is one of the five armed services of the United States, the Commandant of the Coast Guard is not a member of the Joint Chiefs of Staff. The Commandant is, however, entitled to the same supplemental pay as the Joint Chiefs, per 37 U.S.C. § 414(a)(5) ($4,000 per annum in 2009), and is accorded privilege of the floor under Senate Rule XXIII(1) as a de facto JCS member during Presidential addresses. In contrast to the Joint Chiefs—who are not in the military's operational chain of command—the Commandant of the Coast Guard commands his service. Coast Guard officers are legally eligible to be appointed as CJCS and VCJCS, per 10 U.S.C. 152(a)(1) & 154(a)(1) respectively—which use the collective term "armed forces" rather than listing the eligible services—but none has been appointed to either position as of 2016.

This audio file was created from a revision of the "Joint Chiefs of Staff" article dated 2015-09-06, and does not reflect subsequent edits to the article. (Audio help)
More spoken articles

Spoken Wikipedia - English
This article is issued from Wikipedia - version of the 11/19/2016. The text is available under the Creative Commons Attribution/Share Alike but additional terms may apply for the media files.