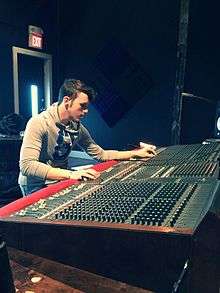 A mix engineer or mixing engineer is a person responsible for combining ("mixing") the different sonic elements of a piece of recorded music (vocals, instruments, effects etc.) into a final version of a song (also known as "final mix" or "mixdown"). He or she mixes the elements of a recorded piece together to achieve a good balance of volume, while at the same time deciding other properties such as pan positioning, effects, and so on.

The best mixing professionals typically have many years of experience and training with audio equipment, which has enabled them to master their craft. A mixing engineer occupies a space between artist and scientist, using their skill at assessing the harmonic structure of sound to enable them to fashion highly appealing timbres. Their work is found in all modern music, but many artists now mix and produce their own music with a digital audio workstation and a computer.

A more technical definition: an audio engineer in sound recording, audio editing and sound systems who balances the relative volume and frequency content of a number of sound sources. Typically, these sound sources are the different musical instruments in a band or vocalists, the sections of an orchestra and so on.

Mixing Engineers are sometimes formally trained in a music background, and some have a degree in audio engineering or recording engineering*.[1] A degree in music can help and broaden the engineer's credentials, though it is known that most experience comes from operating complex audio equipment. The mixing ear comes from years of observing all kinds of sounds, frequencies, and variations of effects and filters, through the process of trial and error.

Mixing engineers rely on their intuition in the process of mixing, but all mixers generally follow certain fundamental procedures:

A mixer is given tracks to work with. They show up well after the artists or session musicians are done recording, and just have this audio to work with. Their job consists of balancing the relative impact of each audio stream, by putting them through effects processors, and having the right amount (dry/wet ratio) of each.