A music sequencer (or simply sequencer) is a device or application software that can record, edit, or play back music, by handling note and performance information in several forms, typically CV/Gate, MIDI, or Open Sound Control (OSC), and possibly audio and automation data for DAWs and plug-ins. (See § Types of music sequencer)[note 1] 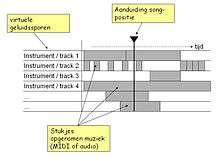 The advent of Musical Instrument Digital Interface (MIDI) and the Atari ST home computer in the 1980s gave programmers the opportunity to design software that could more easily record and play back sequences of notes played or programmed by a musician. This software also improved on the quality of the earlier sequencers which tended to be mechanical sounding and were only able to play back notes of exactly equal duration. Software-based sequencers allowed musicians to program performances that were more expressive and more human. These new sequencers could also be used to control external synthesizers, especially rackmounted sound modules, and it was no longer necessary for each synthesizer to have its own devoted keyboard.

As the technology matured, sequencers gained more features, such as the ability to record multitrack audio. Sequencers used for audio recording are called digital audio workstations (or DAWs).

Many modern sequencers can be used to control virtual instruments implemented as software plug-ins. This allows musicians to replace expensive and cumbersome standalone synthesizers with their software equivalents.

Today the term "sequencer" is often used to describe software. However, hardware sequencers still exist. Workstation keyboards have their own proprietary built-in MIDI sequencers. Drum machines and some older synthesizers have their own step sequencer built in. There are still also standalone hardware MIDI sequencers, although the market demand for those has diminished greatly due to the greater feature set of their software counterparts.

Also, music sequencer can be categorized by its construction and supporting modes.

Realtime sequencers record the musical notes in real-time as on audio recorders, and play back musical notes with designated tempo, quantizations, and pitch. For editing, usually "punch in/punch out" feature originated in the tape recording is provided, although it requires enough skills to obtain desired result. For detailed editing, possibly another visual editing modes under graphical user interface may be more suitable. Anyway, this mode provides usability similar to the audio recorder already familiarized by musicians, and it is widely supported on software sequencer, DAW, and built-in hardware sequencers.

Analog sequencers are typically implemented with analog electronics, and play the musical notes designated by a series of knobs or sliders corresponding to each musical note (step). It is designed for both composition and live performance; users can change the musical notes at any time without regarding recording mode. And also possibly, the time-interval between each musical note (length of each step) can be independently adjustable. Typically, analog sequencer is used to generate the repeated minimalistic phrases which is reminiscent of Tangerine Dream, Giorgio Moroder or trance music.

A step rhythm sequencer on the drum machine

On the step sequencers, musical notes are rounded into the steps of equal time-interval, and users can enter each musical note without exact timing; Instead, each timing and duration of step are designated in several ways:

Software sequencer is a class of application software providing a functionality of music sequencer, and often provided as one feature of the DAW or the integrated music authoring environments. The features provided as sequencers vary widely depending on the software; even an analog sequencer can be simulated. The user may control the software sequencer either by using the graphical user interfaces or a specialized input devices, such as a MIDI controller. 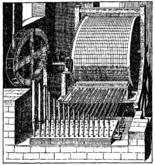 Barrel with pins on a large stationary barrel organ

The early music sequencers were sound producing devices such as automatic musical instruments, music boxes, mechanical organs, player pianos, and Orchestrions. Player pianos, for example, had much in common with contemporary sequencers. Composers or arrangers transmitted music to piano rolls which were subsequently edited by technicians who prepared the rolls for mass duplication. Eventually consumers were able to purchase these rolls and play them back on their own player pianos.

The origin of automatic musical instruments seems considerably old. As early as the 9th century, Persian inventors Banū Mūsā brothers invented hydropowered organ using exchangeable cylinders with pins,[6] and also automatic flute player using steam power,[7][8] as described on their Book of Ingenious Devices. In the 14th century, rotating cylinder with pins were used to play carillon in Flanders, and at least in the 15th century, barrel organs were seen in the Netherlands.[9]

In the late-18th or early-19th century, as the results of Industrial Revolution, various automatic musical instruments were invented, for examples: music box, barrel organ and barrel piano using barrel / cylinder with pins or metal disc with punched holes; or mechanical organ, player piano and orchestrion using book music / music rolls (piano rolls) with punched holes, etc. These instruments were widely spread as the popular entertainment devices before the inventions of phonograph, radio, and sound film. Amongst of all, especially the punched tape media had been long lived until the mid-20th century: earliest programmable music synthesizers including RCA Mark II Sound Synthesizer in 1957, and Siemens Synthesizer in 1959, were also controlled via punch tapes similar to piano rolls.[10][11][12]

Another inventions were came from sound film technology. The drawn sound technique which appeared in the late 1920s, is notable as a precursor of today's intuitive graphical user interfaces. On this technique, notes and various sound parameters were controlled by hand-drawn waves on the films, resembling piano rolls or strip charts on the modern sequencers/DAWs. It was often utilized on early experiments of electronic music, including Variophone developed by Yevgeny Sholpo in 1930, and Oramics designed by Daphne Oram in 1957, etc.

During the 1940s–1960s, Raymond Scott, an American composer of electronic music, invented various kind of music sequencers for his electric compositions. The "Wall of Sound", once covered on the wall of his studio in New York during the 1940s–1950s, was an electro-mechanical sequencer to produce rhythmic patterns, consisting of stepping relays (used on dial pulse telephone exchange), solenoids, control switches, and tone circuits with 16 individual oscillators.[14] Later, Robert Moog explained it as "the whole room would go 'clack - clack - clack', and the sounds would come out all over the place".[15] The Circle Machine, developed in 1959, had dimmer bulbs arranged in a ring, and a rotating arm with photocell scanning over the ring, to generate arbitrary waveform. Also, the rotating speed of arm was controlled via brightness of lights, and as the results, arbitrary rhythms were generated.[16]

Clavivox, developed since 1952, was a kind of keyboard synthesizer with sequencer. On its prototype, a theremin manufactured by young Robert Moog was utilized to enable portamento over 3-octave range, and on later version, it was replaced by a pair of photographic film and photocell for controlling the pitch by voltage.[15]

In 1965 Ralph Lundsten had a polyphonic synthesizer with sequencer called Andromatic. built for him by Erkki Kurenniemi.[17]

Eko ComputeRhythm (1972),[18][19] one of the earliest programmable drum machines

The step sequencers played rigid patterns of notes using a grid of (usually) 16 buttons, or steps, each step being 1/16 of a measure. These patterns of notes were then chained together to form longer compositions. Sequencers of this kind are still in use, mostly built into drum machines and grooveboxes. They are monophonic by nature, although some are multi-timbral, meaning that they can control several different sounds but only play one note on each of those sounds.

On the other hand, software sequencers were continuously utilized since the 1950s in the context of computer music, including computer-played music (software sequencer), computer-composed music (music synthesis), and computer sound generation (sound synthesis). In June 1951, the first computer music Colonel Bogey was played on CSIRAC, Australia's first digital computer.[21][22] In 1956, Lejaren Hiller at the University of Illinois at Urbana-Champaign wrote one of the earliest programs for computer music composition on ILLIAC, and collaborated on the first piece, Illiac Suite for String Quartet, with Leonard Issaction.[23] In 1957 Max Mathews at Bell Labs wrote MUSIC, the first widely used program for sound generation, and a 17-second composition was performed by the IBM 704 computer. Subsequently, computer music was mainly researched on the expensive mainframe computers in computer centers, until the 1970s when minicomputers and then microcomputers became available in this field.

In 1971, Electronic Music Studios (EMS) released one of the first digital sequencer products as a module of Synthi 100, and its derivation, Synthi Sequencer series.[24][25] After then, Oberheim released the DS-2 Digital Sequencer in 1974,[26] and Sequential Circuits released Model 800 in 1977 [27]

Also in 1977, Roland Corporation released their first microprocessor-based digital sequencer, MC-8 Microcomposer, also called computer music composer by Roland.[28] It equipped a keypad to enter notes as numeric codes, 16KB RAM for a maximum of 5200 notes (large at the time), and a polyphony function which allocated multiple pitch CVs to a single Gate.[29] The earliest known user was Yellow Magic Orchestra in 1978.

In 1975, New England Digital (NED) released ABLE computer (microcomputer)[30] as a dedicated data processing unit for Dartmouth Digital Synthesizer (1973), and based on it, later Synclavier series were developed. The Synclavier I, released in September 1977,[31] was one of the earliest digital music workstation product with multitrack sequencer. Synclavier series evolved throughout the late-1970s to the mid-1980s, and they also established integration of digital-audio and music-sequencer, on their Direct-to-Disk option in 1984, and later Tapeless Studio system.

In 1980, renewed Fairlight CMI Series II with its sequencer, "Page R", combined step sequencing with sample playback. In 1987, this led to the development of similar software sequencers of this kind, called Trackers, which became popular in the 1980s and 1990s as simple sequencers for creating computer game music, and are yet popular in the demoscene and chiptunes.

List of papers sharing a similar perspective with this Wikipedia article: