The role of the Crown is both legal and practical; it functions in Prince Edward Island in the same way it does in all of Canada's other provinces, being the centre of a constitutional construct in which the institutions of government acting under the sovereign's authority share the power of the whole.[6] It is thus the foundation of the executive, legislative, and judicial branches of the province's government.[7] The Canadian monarch—since 6 February 1952, Queen Elizabeth II—is represented and her duties carried out by the Lieutenant Governor of Prince Edward Island, whose direct participation in governance is limited by the conventional stipulations of constitutional monarchy, with most related powers entrusted for exercise by the elected parliamentarians, the ministers of the Crown generally drawn from amongst them, and the judges and justices of the peace.[5] The Crown today primarily functions as a guarantor of continuous and stable governance and a nonpartisan safeguard against the abuse of power.[5][8][9] This arrangement began with an 1873 Order in Council by Queen Victoria and continued an unbroken line of monarchical government extending back to the early 16th century.[10] However, though Prince Edward Island has a separate government headed by the Queen, as a province, Prince Edward Island is not itself a kingdom.[11]

The main symbol of the monarchy is the sovereign herself, her image (in portrait or effigy) thus being used to signify government authority.[14] A royal cypher or crown may also illustrate the monarchy as the locus of authority, without referring to any specific monarch. Further, though the monarch does not form a part of the constitutions of Prince Edward Island's honours, they do stem from the Crown as the fount of honour, and so bear on the insignia symbols of the sovereign. 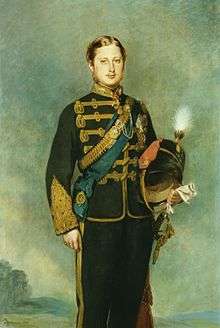 Prince Albert Edward, Prince of Wales, in 1864, four years after he visited Prince Edward Island, making him the first royal to do so

What is today Prince Edward Island was discovered and claimed by John Cabot for King Henry VII, though it was later, in 1523, also claimed by Giovanni da Verrazzano for King Francis I, putting Île Saint-Jean, as Verrazzno called it, under the sovereignty of the French Crown until 1758. In that year, the French settlement of Louisbourg (in present-day Nova Scotia) fell to the British Royal Navy and, with the 1762 Treaty of Fontainbleau, sovereignty over the island was officially transferred by King Louis XV to King George III.[15] In 1763, the Earl of Egmont presented an elaborate memorial to the King, asking that the Island of Saint John, while under the sovereignty of the Crown indefinitely, be granted to him and divided into baronies. George initially denied Egmont's request,[16] but, after Edgemont again presented his petition in 1767, the King this time approved. On 19 July 1769, Saint John Island was separated from the jurisdiction of Nova Scotia and became its own colony of the British Crown.[17]

Prince Edward, George III's fourth son, arrived in Halifax, Nova Scotia, in 1794 and, while he never visited Saint John Island, he, as Commander-in-Chief of the British forces in North America, ordered that new barracks be built in Charlottetown and defences constructed to protect the harbour.[18] Recognising the Prince's interest in the island, its legislature passed a bill on 1 February 1799 that changed the colony's name in honour of Edward.[19] By 1843 construction of Province House was begun, and the laying of the cornerstone was followed by a Royal Salute and three cheers for Queen Victoria.[20] Not four years later, the Legislative Assembly adopted an address to the Queen, asking for the establishment of responsible government in the colony, and the request was soon thereafter granted.[21]