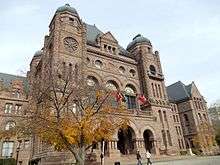 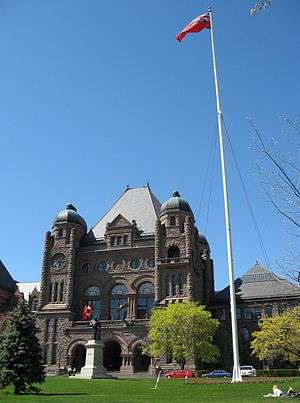 The Ontario Legislature and Queen's Park

The Legislative Assembly was established by the British North America Act, 1867 (later re-titled Constitution Act, 1867), which dissolved the Province of Canada into two new provinces, with the portion then called Canada West becoming Ontario. The Legislature has been unicameral since its inception, with the Assembly currently having 107 seats (increased to 122 as of the 42nd Ontario general election) representing electoral districts ("ridings") elected through a first-past-the-post electoral system across the province.

Like at the federal level in Canada, Ontario uses a Westminster-style parliamentary government, in which members are elected to the Legislative Assembly through general elections, from which the Premier of Ontario and Executive Council of Ontario are appointed based on majority support. The premier is Ontario's head of government, while the Lieutenant Governor, as representative of the Queen, acts as head of state. The largest party not forming the government is known as the Official Opposition, its leader being recognized as Leader of the Opposition by the Speaker.

The current assembly was elected on June 12, 2014 as part of the 41st Parliament of Ontario. The first session of the 41st Parliament opened on July 2, 2014. On Friday May 2, 2014, the 40th Parliament of Ontario was dissolved by Lieutenant Governor David C. Onley on the advice of Premier Kathleen Wynne after the NDP and Progressive Conservative leaders said they would not support the Liberal minority government's budget.[3] The election was held on June 12, 2014, as a result of which Kathleen Wynne's Liberal Party formed a majority government.[4]

Queen's Park is a metonym for the Legislative Assembly.

In accordance with the traditions of the Westminster System, most laws originate with the cabinet (Government bills), and are passed by the legislature after stages of debate and decision-making. Ordinary Members of the Legislature may introduce privately (Private Members' Bills), play an integral role in scrutinizing bills in debate and committee and amending bills presented to the legislature by cabinet.

Members are expected to be loyal to both their parliamentary party and to the interests of their constituents.

In the Ontario legislature this confrontation provides much of the material for Oral Questions and Members' Statements. Legislative scrutiny of the executive is also at the heart of much of the work carried out by the Legislature's Standing Committees, which are made up of ordinary backbenchers.

A Member's day will typically be divided among participating in the business of the House, attending caucus and committee meetings, speaking in various debates, or returning to his or her constituency to address the concerns, problems and grievances of constituents. Depending on personal inclination and political circumstances, some Members concentrate most of their attention on House matters while others focus on constituency problems, taking on something of an ombudsman's role in the process.

Finally, it is the task of the legislature to provide the personnel of the executive. As already noted, under responsible government, ministers of the Crown are expected to be Members of the Assembly. When a political party comes to power it will usually place its more experienced parliamentarians into the key cabinet positions, where their parliamentary experience may be the best preparation for the rough and tumble of political life in government.

The Legislative Assembly of Ontario is the first and the only legislature in Canada to have a Coat of Arms separate from the provincial coat of arms.

Green and gold are the principal colours in the shield of arms of the province. The Mace is the traditional symbol of the authority of the Speaker. Shown on the left is the current Mace. On the right is the original Mace from the time of the first parliament in 1792. The crossed Maces are joined by the shield of arms of Ontario.

The crown on the wreath represents national and provincial loyalties; its rim is studded with the provincial gemstone, the amethyst. The griffin, an ancient symbol of justice and equity, holds a calumet, which symbolizes the meeting of spirit and discussion that Ontario's First Nations believe accompanies the use of the pipe.

The deer represent the natural riches of the province. The Loyalist coronets at their necks honour the original British settlers in Ontario who brought with them the British parliamentary form of government. The Royal Crowns, left 1992, right 1792, recognize the parliamentary bicentennial and represent Ontario's heritage as a constitutional monarchy. They were granted as a special honour by Her Majesty Queen Elizabeth II on the recommendation of the Governor General.

In the base, the maple leaves are for Canada, the trilliums for Ontario and the roses for York (now Toronto), the provincial capital.

The motto "Audi Alteram Partem" is one of a series of Latin phrases carved in the Chamber of the Legislative Building. It challenges Members of Provincial Parliament to "Hear the Other Side".

Proceedings of the Legislative Assembly are broadcast to Ontario cable television subscribers as the Ontario Parliament Network.

Timeline of the 41st Parliament of Ontario

Election of the Legislative Assembly of the 41st Ontario Parliament occurred June 12, 2014, as a result of which Kathleen Wynne's Liberals formed a majority government.

See the following for a detailed seating plan: Official Seating Plan of the 41st Legislature(PDF)

The seating chamber was influenced by the British House of Commons layout and that of the original St. Stephen's Chapel in the Palace of Westminster.[9] The difference with the British layout is with the use of individual chairs and tables for members, absent in the British Commons' design.

A committee which exists for the duration of a parliamentary session. This committee examines and reports on the general conduct of activities by government departments and agencies and reports on matters referred to it by the house, including proposed legislation.[12]

Standing Committees in the current Parliament:

Select committees are set up specifically to study certain bills or issues and according to the Standing Orders, consists of not more than 11 members from all parties with representation reflecting the current standing in the house. In some cases, the committee must examine material by a specific date and then report its conclusion to the legislature. After its final report, the committee is dissolved.[12]

Select Committees in the 39th Parliament:

The ceremonial mace of the Legislature is the fourth mace to be used in Ontario.

The first mace was first used by the Chamber of Upper Canada's first Parliament in 1792 at Newark (now Niagara-on-the-Lake) and then to York (now Toronto). The primitive wooden mace, painted red and gilt and surmounted by a crown of thin brass strips. It was stolen by American troops during the War of 1812 in 1813. The mace was stored at United States Naval Academy at Annapolis, Maryland and remained in the United States until 1934 when it was returned to Ontario when President Franklin Roosevelt sent an order to Congress to return the mace.[13] It was stored at the Royal Ontario Museum for a time, and is now located in the Speaker's office at the Ontario Legislature.

A second mace was introduced in 1813 and used until 1841. The third mace was not purchased until 1845 and then transferred to the Union Parliament and finally to the Parliament of Canada in 1867. This mace was lost in the fire at the Centre Block in 1916. The current mace used in Legislature was purchased in 1867. It is topped by the St Edward's Crown with a diamond inside and head of the mace is engraved with leaves and the royal cypher of Queen Victoria.

Like the Parliament of Canada, the Legislature has procedural officers:

Other officers of the legislature include the Office of the Provincial Advocate for Children and Youth, the Ontario Ombudsman, the Environmental Commissioner, the Integrity Commissioner, the Auditor General, the Chief Electoral Officer, and the Information and Privacy Commissioner.