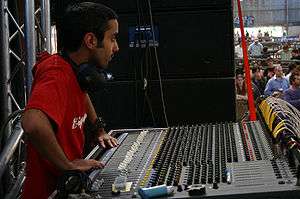 A monitor engineer and console at an outdoor event

Live sound mixing is the process of electrically or digitally blending together multiple sound sources at a live event by an audio engineer using a mixing console. Sounds that are mixed include those from instruments and voices which are picked up by microphones (for drum kit, lead vocals and acoustic instruments like piano or saxophone and pickups for instruments such as electric bass) and pre-recorded material, such as songs on CD or a digital audio player. Individual sources are typically equalised to adjust the bass and treble response and routed to effect processors to ultimately be amplified and reproduced via a loudspeaker system.[1] The live sound engineer balances the various audio sources in a way that best suits the needs of the event.[2]

Audio equipment is usually connected together in a sequence known as the signal chain. In live sound situations, this consists of input transducers like microphones, pickups, and DI boxes. These devices are connected, often via multicore cable, to individual channels of a mixing console that allows these inputs to be modified in various ways (equalization, addition of reverb, etc.) before they are electrically summed. Audio signal processing may be applied to (inserted on) individual inputs, groups of inputs, or the entire output mix, using processors that are internal to the mixer or external (outboard effects, which are often mounted in 19" racks). 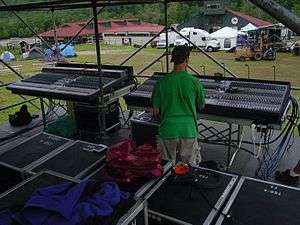 The front of house (FOH) engineer focuses on mixing audio for the audience, and most often operates from the middle of the audience or at the last few rows of the audience. The output signals from the FOH console connects to a Sound reinforcement system. Other non-audio crew members, such as the lighting console operator, might also work from the FOH position, since they need to be able to see the show from the audience's perspective.

For smaller shows, such as bar and smaller club gigs, it is common for the monitors to be mixed from the front of house position, and the number of individual monitor mixes could be limited by the capabilities of the front of house mixing desk.

Mics are set up for the lead vocalist and backup vocalist and the singers are asked to sing individually and as a group, so that the engineer can adjust the levels and equalization. The final part of the sound check is to have the rhythm section and all the vocalists perform a song from their repertoire. During this song, the engineer can adjust the balance of the different instruments and vocalists. This allows the sound of the instruments and vocals to be fine-tuned prior to the audience hearing the first song.

In the 2010s, many professional bands and major venues use digital mixing consoles that have automated controls and a digital memory for previous settings. The settings of previous shows can be saved and recalled in the console and a band can start playing with a limited sound check. Automated mixing consoles are a great time saver for concerts where a main band is preceded by several support acts. Using an automated console, the engineer can record the settings that each band asks for during their individual soundchecks. Then, during the concert, the engineer can call up the settings from memory, and the faders will automatically move to the position that they were placed in during the soundcheck. On a larger scale, technical rehearsals may be held in the days or weeks leading up to a concert. These rehearsals are used to fine-tune the many technical aspects (such as lighting, sound, video) associated with a live performance.

Audio engineers must have extensive knowledge of audio engineering to produce a good mix, because they have to understand how to mix different instruments and amplifiers, what types of mics to use, where to place the mics, how to attenuate "hot" instrument signals that are overloading and clipping the channel, how to prevent audio feedback, how to set the audio compression for different instruments and vocals, and how to prevent unwanted distortion of the vocal sound. However, to be a professional live sound engineer, an individual needs more than just technical knowledge. They must also understand the types of sounds and tones that various musical acts in different genres expect in their live sound mix. This knowledge of musical styles is typically learned from years of experience listening to and mixing sound in live contexts. A live sound engineer must know, for example, the difference between creating the powerful drum sound that a heavy metal drummer will want for her kit, versus a drummer from a Beatles tribute band.