For the Soviet film, see Monologue (film). For the Malayalam film, see Anantaram. For the speech of a narrator, see Voiceover. 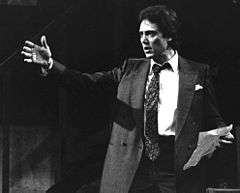 In theatre, a monologue (from Greek language|Greekμονόλογος from μόνος mónos, "alone, solitary" and λόγος lógos, "speech") is a speech presented by a single character, most often to express their mental thoughts aloud, though sometimes also to directly address another character or the audience. Monologues are common across the range of dramatic media (plays, films,[1] etc.), as well as in non-dramatic media such as poetry.[2] Monologues share much in common with several other literary devices including soliloquies, apostrophes, and aside. There are, however, distinctions between each of these devices.

Monologues are similar to poems, epiphanies, and others in that they involve one 'voice' speaking but there are differences between them. For example, a soliloquy involves a character relating his or her thoughts and feelings to him/herself and to the audience without addressing any of the other characters. A monologue is the thoughts of a person spoken out loud.[3] Monologues are also distinct from apostrophes, in which the speaker or writer addresses an imaginary person, inanimate object, or idea.[4] Asides differ from each of these not only in length (asides are shorter) but also in that asides are not heard by other characters even in situations where they logically should be (e.g. two characters engaging in a dialogue interrupted by one of them delivering an aside).[4]

In ancient Greek theatre, the origin of western drama, the conventional three actor rule was preceded by a two actor rule, which was itself preceded by a convention in which only a single actor would appear on stage, along with the chorus.[5] The origin of the monologue as a dramatic device, therefore, is not rooted in dialogue. It is, instead, the other way around; dialogue evolved from monologue.

Ancient Roman theatre featured monologues extensively, more commonly than either Ancient Greek theatre or modern theatre.[6] One of the key purposes of these monologues was to indicate the passage of significant amounts of time (that would be tedious to actually play out in real time) within scenes. This type of monologue is referred to as a linking monologue.[7] Other monologue types included "entrance monologues"[7] and exit monologues.[8] In each of these cases a primary function is indicating the passage of time.[7]

From Renaissance theatre onward, monologues generally focused on characters using the extended speech to pursue their dramatic need. Postmodern theatre, on the other hand, often embraces the performative aspects of the monologue, even to the point of challenging the boundary between character portrayal (e.g. acting) and autobiographical speeches.[9]

Actors in theatre and sometimes in film and television may be called upon to use monologues for audition purposes. Audition monologues demonstrate an actor's ability to prepare a piece and deliver a performance.[12] These pieces are usually relegated to two minutes (sometimes less) and are often paired with a contrasting monologue. This can be a comic monologue paired with a dramatic monologue or it can mean classical paired with contemporary. The choice of monologues for an audition can often depend on the play in question or the role the actor wants to land. The audition monologue is a rite of passage with theatre actors and a tradition that continues today.