The Montrose Center, formerly known as the Montrose Counseling Center (MCC), is an organization that provides mental and behaviorial health services for the LGBT community in Houston, Texas.[1] It is a member of the National Coalition of Anti-Violence Programs.[2][3]

The Montrose Counseling Center opened in 1978, after the widely successful Town Hall Meeting I at the Astrodome.[1][4][5][6] They began with offering primarily behavioral counseling and therapy for LGBT people.[7][8] The MCC faced many financial burdens in their formative years, particularly because the cost of providing health insurance for their employees living with HIV/AIDS was incredibly costly.[8] Then in 1983, the Montrose Activity Center, another LGBT oriented community center, gave the MCC 15,000 dollars in order to keep operating.[9] However, the Montrose Counseling Center was still struggling financially, until 1990 when the Ryan White CARE Act was passed, and the center received funding through the act that allowed them to expand their services.[8] MCC was the first behavioral health center to receive funding under the Ryan White CARE Act.[8] In the 1990's they became one of the first places in Houston to offer temporary housing to gay men and transgender people.[7] In 2013, the center changed their name from the Montrose Counseling Center to the Montrose Center, because they felt that they offered many more services than just counseling, and did not want people to feel as though they could only come to the center for mental health problems.[1][8] Around the same time, the building of the Montrose Center was also painted to represent that they serve the LGBT community, by painting the windows of the building various rainbow colors.[1][10] 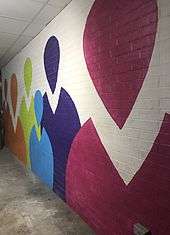 Wall art located on the ground floor of the center

In 2011, the Montrose Center was part of a report issued by the National Coalition of Anti-Violence Programs that addressed intimate partner violence for LGBT individuals.[3] In the report, they stated that they had served 27 victims of intimate partner violence in the previous year, 52% of which were men, 44% women, and 4% transgender individuals.[3] The Montrose Center believes that they are better able to cater to men and transgender victims of domestic violence than are other anti-domestic violence shelters, such as the Houston Area Women's center, as these people need separate space.[1]

The Montrose Center began with providing mental health services to LGBT individuals as its mission.[1] Over time, the center has added substance abuse treatment to its services.[1][20][24] They provide out-patient care for substance abuse and addiction, in addition to substance abuse support groups or "12 Step Programs."[20][24][25]

Out for Education is a foundation that provides scholarships for LGBT youth to pursue higher education.[31] They were founded in 1999, and is completely ran and funded by volunteers and donations.[32] HATCH and Out for Education have given over one million dollars in scholarships to LGBT youth in Houston, which has given many LGBT youths the opportunity to pursue higher education.[27][33]

A study done that researched HATCH Youth found that those who attended HATCH programs felt as they had increased social support and had a decrease in depressive symptoms, especially if they had been attending the program for more than 6 months.[34] 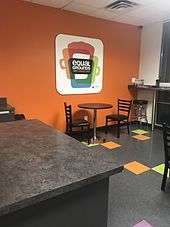 The Equal Grounds café in the Montrose Center in Houston, Texas

The Montrose Center has special programming for senior citizens, as older LGBT individuals often face various unique problems with accessing healthcare, assisted living, and general issues with retirement.[17][35] The specific sub-organization for seniors is SPRY, or "Seniors Preparing for Rainbow Years," that hosts many activities targeted towards seniors.[36] The Montrose Center even focuses on training people who interact with LGBT seniors outside of the SPRY program to recognize warning signs of senior depression and suicide.[37] One event for senior citizens is "Diner Days" every Monday, Wednesday, and Friday, where seniors can socialize and have lunch.[38]

The Montrose Center also offers services that are more directed towards community building and general recreation, rather than health or anti-violence.

One such service they offer is through the Equal Grounds café, which is a small coffee shop at the entrance of the building.The renovation to add the café cost the center 25,000 dollars.[39] The café serves healthy snacks and drinks, and was supposedly a response to community demand for a place to relax and for healthy food options.[40][41][42] The café was initially planned to be named the Gayborhood Café, as Montrose is often referred to as a gayborhood.[1]