Depression is a state of low mood and aversion to activity or apathy that can affect a person's thoughts, behavior, feelings and sense of well-being.[1][2]

Depressed mood is a feature of some psychiatric syndromes such as major depressive disorder,[2] but it may also be a normal reaction, as long as it does not persist long term, to life events such as bereavement, a symptom of some bodily ailments or a side effect of some drugs and medical treatments. A DSM diagnosis distinguishes an episode (or 'state') of depression from the habitual (or 'trait') depressive symptoms someone can experience as part of their personality.[5] 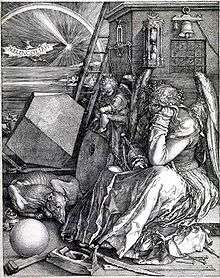 Adversity in childhood, such as bereavement, neglect, mental abuse, physical abuse, sexual abuse and unequal parental treatment of siblings can contribute to depression in adulthood.[6][7] Childhood physical or sexual abuse in particular significantly correlates with the likelihood of experiencing depression over the life course.[8]

Life events and changes that may precipitate depressed mood include childbirth, menopause, financial difficulties, unemployment, work stress, a medical diagnosis (cancer, HIV, etc.), bullying, loss of a loved one, natural disasters, social isolation, rape, relationship troubles, jealousy, separation, and catastrophic injury.[9][10][11] Adolescents may be especially prone to experiencing depressed mood following social rejection, peer pressure and bullying.[12] As well as this, infants who were exposed to their depressed mothers showed growth and development delays at the age of 12 months.[13]

Meta-analyses show that high scores on the personality domain neuroticism precede the development of depressive symptoms as well as all kinds of depression diagnoses,[14] also after adjustment for baseline levels and psychiatric history. Depression is also associated with low extraversion.[15]

Certain medications are known to cause depressed mood in a significant number of patients. These include medications for hepatitis C (such as interferon), anxiety and sleep (such as benzodiazepines like alprazolam, clonazepam, lorazepam and diazepam), high blood pressure (such as beta-blockers, methyldopa, reserpine), and hormonal treatments (such as corticosteroids, contraceptives).[16][17][18] It is important for these factors to be considered when treatment of depression is considered.

Several drugs of abuse can cause or exacerbate depression, whether in intoxication, withdrawal, and from chronic use. These include alcohol, sedatives (including prescription benzodiazepines), opioids (including prescription pain killers and illicit drugs like heroin), stimulants (such as cocaine and amphetamines), hallucinogens, and inhalants.[16]

A number of psychiatric syndromes feature depressed mood as a main symptom. The mood disorders are a group of disorders considered to be primary disturbances of mood. These include major depressive disorder (MDD; commonly called major depression or clinical depression) where a person has at least two weeks of depressed mood or a loss of interest or pleasure in nearly all activities; and dysthymia, a state of chronic depressed mood, the symptoms of which do not meet the severity of a major depressive episode. Another mood disorder, bipolar disorder, features one or more episodes of abnormally elevated mood, cognition and energy levels, but may also involve one or more episodes of depression.[23] When the course of depressive episodes follows a seasonal pattern, the disorder (major depressive disorder, bipolar disorder, etc.) may be described as a seasonal affective disorder. Outside the mood disorders: borderline personality disorder often features an extremely intense depressive mood; adjustment disorder with depressed mood is a mood disturbance appearing as a psychological response to an identifiable event or stressor, in which the resulting emotional or behavioral symptoms are significant but do not meet the criteria for a major depressive episode;[24]:355 and posttraumatic stress disorder, an anxiety disorder that sometimes follows trauma, is commonly accompanied by depressed mood.[25] Depression is sometimes associated with substance use disorder. Both legal and illegal drugs can cause substance use disorder.[26]

Researchers have begun to conceptualize ways in which the historical legacies of racism and colonialism may create depressive conditions.[27][28]

There is a racial difference when considering people facing depression in the USA. For example, adult African-Americans are 20 percent more likely to report serious psychological distress than adult whites.[29] Also, African American men suffer from serious chronic illnesses such as diabetes and cancer at much higher rates than white men, and these diseases and disorders are known to be significant risk factors for depression.[30] By 2016 there is a huge lack of psychological specialists among black people. Whites dominate the psychological and psychiatric professions, as only 2 percent of licensed mental health professionals are African-American, and about three-fourths of these are women. Many African-American men feel uncomfortable revealing their feelings to people who do not share their cultural background, and a shortage of African-American male therapists also means a lack of role models for future scholars who might be searching for a way to give back to their communities.[31] A research conducted by Sirry Alang, a Pennsylvania Lehigh University assistant professor of sociology and anthropology, shows that many African-Americans see depression as a sign of weakness and not a health issue.[32]

Depressed mood may not require professional treatment, and may be a normal reaction to life events, a symptom of some medical condition, or a side effect of some drugs or medical treatments. A prolonged depressed mood, especially in combination with other symptoms, may lead to a diagnosis of a psychiatric or medical condition which may benefit from treatment.[34] Different sub-divisions of depression have different treatment approaches.[35] In the United States, it has been estimated that two thirds of people with depression do not actively seek treatment.[36] The World Health Organisation (WHO) has predicted that by 2030, depression will account for the highest level of disability accorded any physical or mental disorder in the world (WHO, 2008).[37]

The UK National Institute for Health and Care Excellence (NICE) 2009 guidelines indicate that antidepressants should not be routinely used for the initial treatment of mild depression, because the risk-benefit ratio is poor.[38] A recent meta-analysis also indicated that most antidepressants, besides fluoxetine, do not seem to offer a clear advantage for children and adolescents in the acute treatment of major depressive disorder.[39]

Women have a higher rate of major depression than men. While women have a greater proportion of somatic symptoms, such as appetite, sleep disturbances and fatigue accompanied by pain and anxiety, than men, the gender difference is much smaller in other aspects of depression.[40] Instances of suicide in men is much greater than in women. In a report by Lund University in Sweden and Stanford University, it was shown that men commit suicide at a rate almost three times that of women in Sweden, and the Centers for Disease Control and Prevention and National Center for Injury Prevention and Control report that the rate in the US is almost four times as many males as females.[41] However, women have higher rates of suicide ideation and attempts. The difference is attributed to men choosing more effective methods resulting in the higher rate of success.[42][43] This research would suggest that women are more likely to discuss their depression, whereas men are more likely to try and hide it. The culture of women being more free to express than men, could be a contributing factor to this phenomenon.