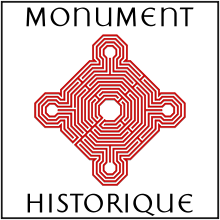 Monument historique logo, based on the Labyrinth of the Reims Cathedral

The term monument historique is a designation given to some national heritage sites in France. It may also refer to the state procedure in France by which National Heritage protection is extended to a building, a specific part of a building, a collection of buildings, garden, bridge, or other structure, because of their importance to France's architectural and historical cultural heritage.[1] Both public and privately owned structures may be listed in this way, as well as also movable objects. As of 2012 there were 44,236 monuments listed.

Buildings may be given the classification for both their exteriors or interiors, including a building's décor, its furniture, a single room, or even a staircase. An example is the Monument Historique classification of the décor in the café "Deux Garçons" in Aix-en-Provence whose patrons once included Alphonse de Lamartine, Émile Zola and Paul Cézanne. Some buildings are designated because of their connection to a single personality, such as the Auberge Ravoux in Auvers-sur-Oise which is designated an MH because of its connection to the painter Vincent van Gogh. Since the 1990s, a significant number of places have been given the designation because of their historical importance to science.

The MH designation traces its roots to the French Revolution when the government appointed Alexandre Lenoir to specify and safeguard certain structures. Though the first classifications were given in the 19th century by the writer Prosper Mérimée, inspector-general of historical monuments, by a first list established in 1840. In 1851, Mérimée organized the Missions Héliographiques to document France's medieval architecture.

A "monument historique" may be marked by the official logo of the Union REMPART, a French historical restoration association. It consists of a design representing the labyrinth that used to be in Reims Cathedral, which is itself a World Heritage Site. Use of the logo is optional.

There are two categories of protection :

These two levels of protection are determined after a thorough historical study by the préfet for the région, or by the Minister of Culture for the national level. They are aided by the advice of a commission named Commission régionale du patrimoine et des sites . 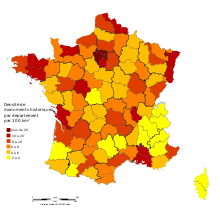 Density of monuments historiques by 100 km² (red is the highest)

Examples of buildings classified as monument historique include well known Parisian structures such as the Eiffel Tower, the Louvre, and the Palais Garnier opera house, plus abbeys, churches such as Corbiac, and cathedrals such as Notre Dame de Paris or hotels such as the Crillon. Many of the Châteaux of the Loire Valley carry the MH designation as do the renowned gardens at Château de Villandry. The scope of the monuments covered is broad enough to include individual tombs of important people, for example, Napoleon I as well as less eminent people such as Agnès Souret, the first Miss France, whose tomb is in the Basque Country.