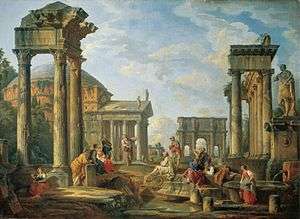 Roman ruins with a prophet, by Giovanni Pannini, 1751. The artistic cultural heritage of the Roman Empire served as a foundation for later Western culture, particularly via the Renaissance and Neoclassicism (as exemplified here).

Cultural heritage is the legacy of physical artifacts and intangible attributes of a group or society that are inherited from past generations, maintained in the present and bestowed for the benefit of future generations. Cultural heritage includes tangible culture (such as buildings, monuments, landscapes, books, works of art, and artifacts), intangible culture (such as folklore, traditions, language, and knowledge), and natural heritage (including culturally significant landscapes, and biodiversity).

The deliberate act of keeping cultural heritage from the present for the future is known as preservation (American English) or conservation (British English), though these terms may have more specific or technical meaning in the same contexts in the other dialect.

The ethics and rationale of cultural preservation

Objects are a part of the study of human history because they provide a concrete basis for ideas, and can validate them. Their preservation demonstrates a recognition of the necessity of the past and of the things that tell its story.[1] In The Past is a Foreign Country, David Lowenthal observes that preserved objects also validate memories. While digital acquisition techniques can provide a technological solution that is able to acquire the shape and the appearance of artifacts with an unprecedented precision[2] in human history, the actuality of the object, as opposed to a reproduction, draws people in and gives them a literal way of touching the past. This unfortunately poses a danger as places and things are damaged by the hands of tourists, the light required to display them, and other risks of making an object known and available. The reality of this risk reinforces the fact that all artifacts are in a constant state of chemical transformation, so that what is considered to be preserved is actually changing – it is never as it once was.[3] Similarly changing is the value each generation may place on the past and on the artifacts that link it to the past.

Classical civilizations, and especially the Indian, have attributed supreme importance to the preservation of tradition. Its central idea was that social institutions, scientific knowledge and technological applications need to use a "heritage" as a "resource".[4] Using contemporary language, we could say that ancient Indians considered, as social resources, both economic assets (like natural resources and their exploitation structure) and factors promoting social integration (like institutions for the preservation of knowledge and for the maintenance of civil order).[5] Ethics considered that what had been inherited should not be consumed, but should be handed over, possibly enriched, to successive generations. This was a moral imperative for all, except in the final life stage of sannyasa.

What one generation considers "cultural heritage" may be rejected by the next generation, only to be revived by a subsequent generation. 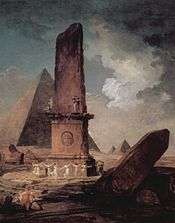 Classical Ruins by Hubert Robert, 1798. Elements of tangible culture depicted include the ruins of the obelisk (foreground) and the pyramids (background).

Cultural property includes the physical, or "tangible" cultural heritage, such as artworks. These are generally split into two groups of movable and immovable heritage. Immovable heritage includes buildings (which themselves may include installed art such as organs, stained glass windows, and frescos), large industrial installations or other historic places and monuments. Moveable heritage includes books, documents, moveable artworks, machines, clothing, and other artifacts, that are considered worthy of preservation for the future. These include objects significant to the archaeology, architecture, science or technology of a specified culture.

Aspects and disciplines of the preservation and conservation of tangible culture include: 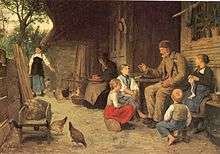 "Intangible cultural heritage" consists of non-physical aspects of a particular culture, more often maintained by social customs during a specific period in history. The concept includes the ways and means of behavior in a society, and the often formal rules for operating in a particular cultural climate. These include social values and traditions, customs and practices, aesthetic and spiritual beliefs, artistic expression, language and other aspects of human activity. The significance of physical artifacts can be interpreted against the backdrop of socioeconomic, political, ethnic, religious and philosophical values of a particular group of people. Naturally, intangible cultural heritage is more difficult to preserve than physical objects.

Aspects of the preservation and conservation of cultural intangibles include:

"Natural heritage" is also an important part of a society's heritage, encompassing the countryside and natural environment, including flora and fauna, scientifically known as biodiversity, as well as geological elements (including mineralogical, geomorphological, paleontological, etc.), scientifically known as geodiversity. These kind of heritage sites often serve as an important component in a country's tourist industry, attracting many visitors from abroad as well as locally. Heritage can also include cultural landscapes (natural features that may have cultural attributes).

Aspects of the preservation and conservation of natural heritage include: 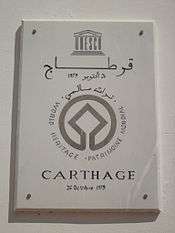 Plaque stating the designation of Carthage as a World Heritage Site.

Significant was the Convention Concerning the Protection of World Cultural and Natural Heritage that was adopted by the General Conference of UNESCO in 1972. As of 2011, there are 936 World Heritage Sites: 725 cultural, 183 natural, and 28 mixed properties, in 153 countries. Each of these sites is considered important to the international community.

In additional, UNESCO has begun designating masterpieces of the Oral and Intangible Heritage of Humanity. The Committee on Economic, Social and Cultural Rights sitting as part of the United Nations Economic and Social Council with article 15 of its Covenant had sought to instill the principles under which cultural heritage is protected as part of a basic human right.

Key international documents and bodies include:

Rediscovery of the Muisca Indigenous Heritage

Youth and Heritage in Syria

Much of heritage preservation work is done at the national, regional, or local levels of society. Various national and regional regimes include:

Secretary of State for Culture, Arts and Sports

Institute for Protection of Cultural Monuments

National Historical Commission of the Philippines

Broad philosophical, technical, and political issues and dimensions of cultural heritage include: