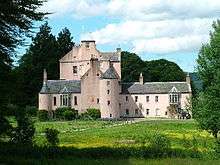 The House of Monymusk

Monymusk (Scottish Gaelic: Monadh Musga) is a planned village in the Marr area of Aberdeenshire, Scotland.

Malcolm Canmore first established a Celtic foundation on the site in 1078. The Culdees of Munimusc are recorded as inhabiting the site in 1170. An Augustinian priory was built by Gilchrist, Earl of Mar, around 1200. The estate passed from the Forbes family to the Grant family in 1712, and Sir Archibald Grant established a planned village for estate workers. The village was largely rebuilt again in 1840.[1][2]

In modern times, Monymusk serves as a site for fishing on the nearby River Don.[3]

The eminent geologist and palaeontologist Dame Maria Matilda Ogilvie Gordon was born in the village in 1864. The painters Archibald and Alexander Robertson were also natives of the village.