This article is about the fortress in Havana. For other places, see El Morro. 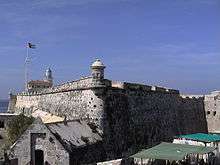 Morro Castle (Spanish: Castillo de los Tres Reyes Magos del Morro), named after the three biblical Magi, is a fortress guarding the entrance to Havana bay in Havana, Cuba. The design was drawn up by the Italian engineer Juan Bautista Antonelli; originally under the control of Spain, the fortress was captured by the British in 1762, and was returned to the Spanish under treaty terms a year later.[1]

The Morro fortress in Havana shares its name with structures in Santiago de Cuba and the Castillo de San Felipe del Morro in San Juan, Puerto Rico. In this case, the Spanish "morro" means a rock which is very visible from the sea and therefore serves as a navigational landmark.[2] Perched on the promontory on the opposite side of the harbor from Old Havana, it can be viewed from miles around as it dominates the port entrance. Built initially in 1589 in response to raids on Havana harbor, el Morro protected the mouth of the harbor with a chain being strung out across the water to the fort at La Punta.

Morro Castle before the British attack, 30 July 1762 by Dominic Serres
Main articles: Battle of Havana (1762) and Great Britain in the Seven Years War

It first saw action in 1762, while under the command of Luis Vicente de Velasco e Isla. The British expedition against Cuba under Lord Albemarle landed in Cojimar to the east of Havana and attacked the fortress from its landward side. The fort fell when the British successfully mined one of its bastions. When the British handed the island back in 1763 to Spain, the fortress at La Cabaña was built to prevent this from happening again.

Inside the gates is an exhibition on the lighthouses of Cuba – El Morro once housed a school for lighthouse keepers. There was actually a watchtower here until the British blew it up during their successful siege in 1762. The Faro Castillo del Morro lighthouse was added in 1846.

The cannons around the fort are now badly rusted, but the walls are well preserved. The fort has central barracks up to four stories high. A small underwater archeology exhibition is also located here. Noteworthy are the old latrines and their chute into the sea, as are the two sets of doors and the drawbridge mechanism. The current harbor master's office is still housed in the fortress. A plaque dedicated by the ambassador of the United Kingdom commemorates the 1762 siege, and a small memorial is located between two strong powder rooms in the northeast bastion.

A small turret at the end of the wall offers views of the sea crashing onto the rocks 20 meters below, and of the huge dry moat. The opposite side of the moat holds more modern guns and cannons, La Bateria de Velasco, and offers a sweeping view down to Cojimar.

Morro Castle can be seen in the background of John Singleton Copley's oil painting Watson and the Shark (1778).

Morro Castle appears in the movie The Ghost Breakers (1940), in the background as Bob Hope and Paulette Goddard enter the harbor by ship.

The climactic scenes from The Big Boodle (1957) starring Errol Flynn were shot at Morro Castle in pre-Castro Cuba.

During his life, the Castro regime imprisoned the Cuban poet and novelist Reinaldo Arenas (1943-1990) at El Morro Castle for criticism of the government. The film version of Arenas's autobiography, Before Night Falls (2000), starring Javier Bardem, features scenes set in El Morro Castle prison. (A fortress in Mexico City doubled for the prison, since the filmmakers were not allowed to film in Cuba.)

The Cuban writer José Antonio Echeverría (1815-1885) published his only novel, Antonelli (1839), in the periodical La Cartera Cubana in three parts.[3] An historical novel in the tradition of Walter Scott, Antonelli describes the love triangle among Antonelli, a Spanish soldier, and the planter's daughter they both love. Morro Castle is the setting for many of the book's events, including its tragic finale.

Morro Castle appears in the Havana level of the PlayStation game Driver 2, and is fully accessible.

It appears also in the video game Assassin's Creed IV.