Breast cancer metastatic mouse models are experimental approaches in which mice are genetically manipulated to develop a mammary tumor leading to distant focal lesions of mammary epithelium . Recent ameliorations in maneuvering the mouse genome have provided the technology to induce mammary cancers in mice arising from genetic mutations that have been identified in human cancer. This means models can be generated based upon molecular lesions consistent with the human disease.

Metastasis is a process of migration of tumour cells from the primary cancer site to a distant location where the cancer cells form secondary tumors. Metastatic breast cancer represents the most devastating attribute of cancer and it is considered an advanced-stage event.[1] Human breast cancer metastasizes to multiple distant organs such as the brain, lungs, bones and liver.

The classical theory developed in the early 70’s anticipated that metastasis is due to genetically determined subpopulations in primary tumours.[2] The genetic variance between metastatic foci is significant for only particular locus and within specific cell populations or only one-cell population shows differences and some loci are divergent only in one cell subpopulation. This explains the concept of tumour heterogeneity and the order of genetic events during tumor evolution. Many of the genes driving the growth at primary site can determine the dissemination and colonization at the ectopic site.[3][4][5] Breast cancer is consensually considered genetically and clinically as a heterogeneous disease, in that it reflects the heterogeneity of the normal breast tissue at its origin17873350.[6] A number of discrete genetic events have to occur in order to enable individual tumor cells that have the capacity to grow at an ectopic site. The metastatic progression depends on the regulation of developmental programs and environmental events.[7] The metastatic potential of sub populations within mouse mammary cells is now considered as relatively an early event and dissemination occurs at the same time of pre invasive or micro-invasive lesions.[8][9] The genetic profiles of primary and metastatic lesions in breast carcinomas show a large extent of clonal pertinence between lesions.[10][11] There are various patterns of prevalence of genetic mutations in the genomes of primary breast tumour and its metastases.[12][13][14] It also confirms the genetic heterogeneity between the primary neoplasm of breast cancer patients and their respective metastases.[15][16]

Breast cancer phenotypes periodically express genes in metastasis that are indispensable for the metastatic process. Metastatic diversity is mediated by the activation of genes that act as coupling to organ-specific growth.[17] The growth of lesions at the ectopic site depends on multiple complex interactions between metastatic cells and host homeostatic mechanisms. Lethal protein-protein interactions at the metastatic site aid the survival of adapted cells.[18]

Human and mouse: a genomic comparison

Genetic studies of common diseases in humans suffer significant limitations for practical and ethical reasons. Human cell lines can be used to model disease but it is difficult to study processes at the tissue level, within an organ or across the entire body. Mice can be a good representation of diseases in humans because:.[21]

Transplantation of tumor cells into immunodeficient mice is a tool to study breast cancer and its metastatic effects. The transplantation occurs as either allotransplants or xenographic transplants.[22] Commonly, human cells are inoculated in an immunocompromised murine recipient. Inoculating cells through intra ductal transplantations,[23] by cleared mammary fat pad injections[24][25] or by transplantations into the tail vein.[26][27][28] Different organs can be seeded with breast cancer cells depending on the route of injection[29]

The mice undergoing the process of transgenesis are known as transgenic mice. A basic transgene has a promoter region, Protein coding sequence, Intron and a stop codon. Mouse mammary tumor virus (MMTV), is a retro virus that has been a known promoter to cause breast tumors once activated.[33] MMTV is a heritable somatic mutagen whose target range is limited. It harbors a regulatory DNA sequence called the long terminal repeat (LTR), which promotes steroid-hormone-inducible transcription.[34][35] Whey acidic protein (WAP),[36] is another common promoter used to generate mouse mammary cancer models. For a list of other mammary gland specific promoters and mouse models see.[37] 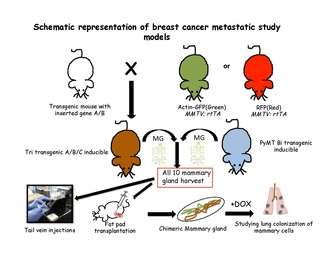 MMTV-PyMT is the model of breast cancer metastasis, in which MMTV-LTR is used to drive the expression of mammary gland specific polyoma virus middle T-antigen, leading to a rapid development of highly metastatic tumors.[38] MMTV-PyMT is the most commonly used model for the study of mammary tumor progression and metastasis. MMTV-PyMT mice are then crossed bred with other genetically modified mice to generate various types of breast cancer models, including:

The MMTV-LTR can also be used to promote receptor tyrosine-protein kinase ErbB2 to transform the mouse mammary epithelium. ErbB2 is an oncogene amplified and overexpressed in around 20% of human breast cancers. The mice harbouring this oncogene develop multifocal adenocarcinomas with lung metastases at about 15 weeks after pregnancy.[47][48]

Tri-transgenic mouse models constitute of more than two genes. Multiple combinations and genetic modifications are made in such a way that either one or all the genes are put into a continuously expressed status, or in a controlled fashion to activate them at different time points. For example, TOM( TetO-myc); TOR; MTB mice, where both the myc (M) and ras (R) genes are under the control of tetracycline operators. They can also both be activated or deactivated by adding doxycycline. Other combinations in this respect are TOM; Kras; MTB, where myc can be induced and uninduced at various time points while Kras is in continuous expressed state, and myc; TOR; MTB model is vice versa.[52]

Identification of genes that regulate metastasis

By knocking in/knocking out specific genes by homologous recombination, the extent of metastasis can be measured and new target genes identification can be achieved e.g. a gene that consistently regulates metastatic behavior of cancer cells is TGF-β1. Acute ablation of TGF-β signaling in MMTV-PyMT mammary tumor cells leads to a five-fold increase in lung metastasis.[53]

The quantitative lineage-tracing strategies have proven to be successful in resolving cell fates in normal epithelial tissues either using tissue –specific or stem-cell-specific transgenes. To conduct an inducible lineage-tracing experiment two components must be engineered into the mouse genome: a switch and a reporter. The switch is commonly a drug-regulated form of the bacterial enzyme Cre-recombinase. This enzyme recognizes specific sequences, called LoxP sites.[54] Proteins that are capable of enhancing the identification of labeled cells or a specific population in unlabelled cells are encoded by the reporter transgenes. After harvesting all the ten mouse mammary glands from the transgenic mice, single cell suspension is usually made and transplanted either in tail vein of non transgenic recipient mice[26] or in cleared fat pad of non-transgenic mice repopulating the mammary fat pad.[55] These cells are then followed in the blood stream, lungs, bone marrow and liver to look for the favorable site of metastasis.these transgenic cells can be traced according to their special features of either fluorescence or induced by placing the recipients on doxycycline food.

Another tool to study breast cancer metastasis is to look for circulating tumor cells in transgenic mice e.g. MMTV-PyMT mice can respond to various therapies in shedding tumor cells in the blood leading to lung metastasis.[56] Not only in blood but cells can be detected in bone marrow e.g. cytokeratin-positive cells in the bone marrow of MMTV-pyMT and MMTV-Neu transgenic mice were identified but not in the wild type controls.[57]

In the absence of specific markers for mammary cells, models with genetic marking of tumor cells gives the best experimental advantage, however the low volume of peripheral blood that can be obtained from live animals limits the application of this technique.

Transgenic mouse models can be imaged by various non-invasive techniques. 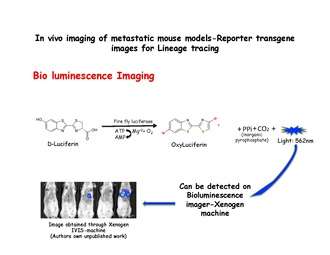 Bioluminescence imaging relies on the detection of light produced by the enzymatic oxidation of an exogenous substrate. The substrate luciferin, is oxidized to oxyluciferin in the presence of luciferase and emits light, which can be detected using an IVIS system such as a Xenogen machine. Dissociated mammary cells from MMTV-PyMT: IRES: Luc; MTB (Internal ribosome entry site: Luciferin) animals (which were not exposed to doxycycline) can be injected into the lateral tail veins of immunodeficient mice on a doxycycline-free diet. No bioluminescence signal will be observed in the lungs of recipient mice until they are given doxycycline food. Bioluminescence can then be detected in the chest within 2 weeks of the start of doxycycline exposure.[26] Luciferase is injected just before taking the images.

Intravital microscopy with multi photon excitation is a technique to visualize genetically engineered cells directly in vivo. Multi step metastatic cascades can be visualized by labelling with unique fluorescent colour under fluorescence microscope.[58][59]