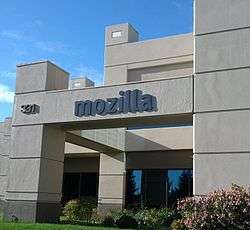 In 2006, the Mozilla Corporation generated $66.8 million in revenue and $19.8 million in expenses, with 85% of that revenue coming from Google for "assigning [Google] as the browser's default search engine, and for click-throughs on ads placed on the ensuing search results pages."[6][7]

In March 2006, Jason Calacanis reported a rumor on his blog that Mozilla Corporation gained $72M during the previous year, mainly thanks to the Google search box in the Firefox browser.[8] The rumor was later addressed by Christopher Blizzard, then a member of the board, who wrote on his blog that, "it’s not correct, though not off by an order of magnitude."[9] Two years later, TechCrunch wrote: "In return for setting Google as the default search engine on Firefox, Google pays Mozilla a substantial sum – in 2006, the total amounted to around $57 million, or 85% of the company’s total revenue. The deal was originally going to expire in 2006, but was later extended to 2008 and will now run through 2011."[10] The deal was extended again another 3 years, until November 2014. In this latest deal, Mozilla will get another $900 million ($300 million annually) from Google, nearly 3 times the previous amount.[11]

In August 2006, Microsoft posted a letter on Mozilla newsgroups[12] and offered to open up a new open-source facility at its headquarters in Redmond, Wash., to Mozilla software engineers. Mozilla responded by accepting the offer.[13]

In March 2014, Mozilla came under some criticism after it appointed Brendan Eich as its new Chief Executive Officer (CEO). In 2008, Eich had made a $1,000 contribution in support of California Proposition 8,[14] a ballot initiative that barred legal recognition of same-sex marriages in California.[15] Three of six Mozilla board members reportedly resigned over the choice of CEO,[16] though Mozilla said the resigning board members had "a variety of reasons"[17] and reasserted its continued commitment to LGBT equality,[18][19] including same-sex marriage.[20] On April 1, the online dating site OkCupid started displaying visitors using Mozilla Firefox a message urging them to switch to a different web browser, pointing out that 8% of the matches made on OkCupid are between same-sex couples.[21] On April 3, Mozilla announced that Eich had decided to step down as CEO and also leave the board of Mozilla Foundation.[22][23] This, in turn, prompted criticism from some commentators who criticized the pressure that led Eich to resign.[24][25][26] For example, Conor Friedersdorf argued in The Atlantic that "the general practice of punishing people in business for bygone political donations is most likely to entrench powerful interests and weaken the ability of the powerless to challenge the status quo."[27]

In April 2014, Chris Beard, the former chief marketing officer of Mozilla, was appointed interim CEO. Beard was named CEO in July 28 of the same year.[28]

The Mozilla Corporation's relationship with Google has been noted in the popular press,[29][30] especially with regard to their paid referral agreement. Mozilla's original deal with Google to have Google Search as the default web search engine in the browser expired in 2011, but a new deal was struck, where Google agreed to pay Mozilla just under a billion dollars over three years in exchange for keeping Google as its default search engine. The price was driven up due to aggressive bidding from Microsoft's Bing and Yahoo!'s presence in the auction as well. Despite the deal, Mozilla Firefox maintains relationships with Bing, Yahoo!, Yandex, Baidu, Amazon.com and eBay.[31]

The release of the anti-phishing protection in Firefox 2 in particular raised considerable controversy:[39] Anti-phishing protection, enabled by default, is based on a list updated twice hourly from Google's servers.[40] The user cannot change the data provider within the GUI,[41] and is not informed who the default data provider is. The browser also sends Google's cookie with each update request.[42] Some internet privacy advocacy groups have expressed concerns surrounding Google's possible uses for this data, especially since Firefox's privacy policy states that Google may share (non-personally identifying) information gathered through safe browsing with third parties, including business partners.[43]

Following Google CEO Eric Schmidt's comments in December 2009 regarding privacy during a CNBC show,[44] Asa Dotzler, Mozilla's director of community development suggested that users use the Bing search engine instead of Google search.[45] Google also promoted Firefox through YouTube until the release of Google Chrome. In August 2009, Mozilla Security assisted Google by pointing out a security flaw in Google's Chrome browser.[46]

In November 2014, Mozilla signed a five-year partnership with Yahoo!, making Yahoo! Search the default search engine for Firefox browsers in the US.[47]

Microsoft's head of Australian operations, Steve Vamos, stated in late 2004 that he did not see Firefox as a threat and that there was not significant demand for the feature-set of Firefox among Microsoft's users.[48] Microsoft Chairman Bill Gates has used Firefox, but has commented that "it's just another browser, and IE [Microsoft's Internet Explorer] is better".[49]

A Microsoft SEC filing on June 30, 2005 acknowledged that "competitors such as Mozilla offer software that competes with the Internet Explorer Web browsing capabilities of our Windows operating system products."[50] The release of Internet Explorer 7 was fast tracked, and included functionality that was previously available in Firefox and other browsers, such as tabbed browsing and RSS feeds.[51]

Despite the cold reception from Microsoft's top management, the Internet Explorer development team maintains a relationship with Mozilla. They meet regularly to discuss web standards such as extended validation certificates.[52] In 2005, Mozilla agreed to allow Microsoft to use its Web feed logo in the interest of common graphical representation of the Web feeds feature.[53]

In October 2006, as congratulations for a successful ship of Firefox 2, the Internet Explorer 7 development team sent a cake to Mozilla.[56][57] As a nod to the browser wars, some jokingly suggested that Mozilla send a cake back along with the recipe, in reference to the open-source software movement.[58] The IE development team sent another cake on June 17, 2008, upon the successful release of Firefox 3,[59] again on March 22, 2011, for Firefox 4,[60] and yet again for the Firefox 5 release.[61]

In February 2009, Microsoft released Service Pack 1 for version 3.5 of the .NET Framework. This update also installed Microsoft .NET Framework Assistant add-on (enabling ClickOnce support).[64] The update received media attention after users discovered that the add-on could not be uninstalled through the add-ons interface.[65][66] Several hours after the website Annoyances.org posted an article regarding this update, Microsoft employee Brad Abrams posted in his blog Microsoft's explanation for why the add-on was installed, and also included detailed instructions on how to remove it.[67] However, the only way to get rid of this extension was to modify manually the Windows Registry, which could cause Windows systems to fail to boot up if not done correctly.[65]

On October 16, 2009, Mozilla blocked all versions of Microsoft .NET Framework Assistant from being used with Firefox and from the Mozilla Add-ons service.[68] Two days later, the add-on was removed from the blocklist after confirmation from Microsoft that it is not a vector for vulnerabilities.[69][70] Version 1.1 (released on June 10, 2009 to the Mozilla Add-ons service) and later of the Microsoft .NET Framework Assistant allows the user to disable and uninstall in the normal fashion.[71]

Firefox is one of the twelve browsers offered to European Economic Area users of Microsoft Windows since 2010 – see BrowserChoice.eu.[72]

The Internal Revenue Service opened an audit of the Mozilla Foundation's 2004-5 revenues in 2008, due to its search royalties, and in 2009, the investigation was expanded to the 2006 and 2007 tax years, though that part of the audit was closed. As Mozilla does not derive at least a third of its revenue from public donations, it does not automatically qualify as a public charity.[73]

In November 2012, the audit was closed after finding that the Mozilla Foundation owed a settlement of $1.5 million to the IRS.[74][75]

Most Mozilla Foundation employees transferred to the new organization at Mozilla Corporation's founding.

The board of directors is appointed by and responsible to Mozilla Foundation's board. In March 2014, half the board members resigned.[16] The remaining board members are: