i/uːmˈtɑːtɑː/ is the main town of the King Sabata Dalindyebo Local Municipality in Eastern Cape province of South Africa. The town has an airport, previously known by the name K. D. Matanzima Airport[3] after former leader Kaiser Matanzima. 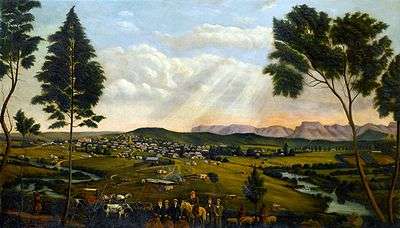 The settlement existed in the 1870s as a buffer-zone, in response to reported tensions between Pondo and neighboring groups, and in 1875 a magistrate's office was opened, the first magistrate appointed that year being a man named J F Boyes. The settlement developed during the next few years, becoming a military post for the British colonial forces in 1882. The town itself was founded in 1883, along the banks of the Mthatha River. Nearly a century later, the Mthatha Dam was constructed about eight kilometers upstream of the town.[4] Mthatha became the leading administrative center of the area, having both Anglican and Catholic cathedrals. It also became the seat of the traditional authorities and a parliament building for this purpose known as the Bunga, was erected.

A branch of the University of Fort Hare was established in the town, and after the independence of the Transkei in 1977 it became the University of Transkei, which has since been integrated into the Walter Sisulu University for Technology and Science. The campus was the base for the region's first community radio station, UCRFM, which started in 1996 and has become a significant community broadcaster.

From 1976 to 1994, Mthatha served as the capital of the Transkei bantustan, under the name of Umtata.[5]

After the end of apartheid, some sections of the African business and professional community migrated to traditionally white areas of economic activity, and this has been widely posited as a cause of economic recession in the municipality, but a number of construction projects offer some hope for renewal.[6]

Many of South Africa's black leaders — including Walter Sisulu, Bantu Holomisa, and Nelson Mandela — come from this area, and the retired Mandela visited his home village of Qunu a few kilometres south of Mthatha.[7] Mthatha is the home of one of the three Nelson Mandela Museums: Spread across three sites, it collects, interprets and exhibits key aspects of the story of the life and times of Nelson Mandela in context. The three historical sites of the museum are all in the locality at Mvezo, Qunu, and the Bunga Building in Mthatha itself. In the Bunga Building is the story of the Long Walk to Freedom and an exhibition of the many gifts received by Nelson Mandela.

On 2 March 2004 Umtata was officially renamed to its current name Mthatha.[8]