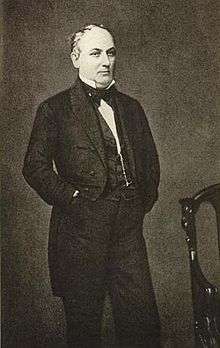 Mudsill theory is a sociological term indicating the proposition that there must be, and always has been, a lower class for the upper classes to rest upon. The term derives from a mudsill, the lowest threshold that supports the foundation for a building.

The theory was first used by South Carolina Senator/Governor James Henry Hammond, a wealthy southern plantation owner, in a Senate speech on March 4, 1858,[1] to justify what he saw as the willingness of the lower classes and the duty of non-whites to perform menial work which enabled the higher classes to move civilization forward. Efforts to reduce class or racial inequality, under this theory, inevitably run counter to civilization itself.

Many saw the argument as a weak justification for exploitation, and a flimsy example of creating your own science to reference as proof.[2] An obvious flaw lies in that there are no indications as to which class or race rightfully belongs to the mudsill other than the pre-supposed regional groups that were already in place at the "bottom", or the class or race that was the least technologically and culturally advanced, thus causing a circular argument.

It was directly used to advocate slavery in the rhetoric of others pre-Civil War Democrats, that were struggling to maintain their grip on the Southern economy. They saw the abolition of slavery as a threat to their powerful new Southern market that revolved almost entirely around the plantation system which was furthered by the use of primarily African slaves, but also utilized destitute whites.

These and other colloquialisms were used as rhetoric in what has been dubbed "the Marxism of the Master-Class" [3] which fought for the rights of the propertied elite against what were perceived as threats from the abolitionists, lower classes and non-whites to gain higher standards of living.

Abraham Lincoln argued forcefully against the mudsill theory, particularly in a speech in Milwaukee, Wisconsin, in 1859,[4] where he delineated its incompatibility with Free Soil. In his view, mudsill advocates "conclude that all laborers are necessarily either hired laborers, or slaves", since to them, "nobody labors unless somebody else, owning capital... induces him to do it." Further, mudsillers believed that these laborers were "fatally fixed" in their status. Lincoln contrasted his view that labor was in fact the source of capital, noting that a majority of persons in Free States were "neither hirers nor hired", but in such professions as farming where they worked for themselves.[5]

Northern soldiers fighting in the Western Theater of the Civil War turned this derogatory term into one of self pride, as in "Western Mudsill".