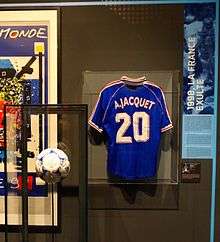 An exhibit on France's 1998 FIFA World Cup victory: a jersey emblazoned with manager Aimé Jacquet's name and the match ball used in the Final.

The Musée national du Sport is a national sports museum located in the Grand Stadium of Nice, France.

The museum was first established in 1922 by the French minister of war, who held responsibility for sports. In the 1940s, the museum fell into desuetude, but was reestablished by the secretary of state for youth and sports in 1963. Architect Roger Taillibert created the galleries inside the Parc des Princes stadium in 1972. The museum moved to 93 Avenue de France in the 13th arrondissement of Paris from 2008 to 2013, until its relocation in Nice on June 27, 2014.

Today, the museum contains more than 100,000 items documenting sports from the 16th century to the present, including a fine collection on the history of the modern Olympic Games from 1896. The collections include sports equipment, paintings, sculptures, posters, drawing, philately, advertising, books, and magazines.