The Parc des Princes (French pronunciation: ​[paʁk de pʁɛ̃s], literally "Princes’ Park" in English) is an all-seater football stadium in Paris, France.[1] The venue is located in the south-west of the French capital,[2] inside the 16th arrondissement of Paris, in the immediate vicinity of the Stade Jean-Bouin (rugby venue) and within walking distance from the Stade Roland Garros (tennis venue).[1]

The stadium, with a seating capacity of 48,583 spectators,[3] has been the home pitch of Ligue 1 club Paris Saint-Germain Football Club since 1974. Before the opening of the Stade de France in 1998, it was also the home stadium of the French football and rugby national teams.[4]

The current stadium is the third to have been built on the site, the first opening its doors in 1897 and the second following in 1932.[2] Conceived by architect Roger Taillibert, the Parc des Princes officially opened on 4 June 1972,[5] at a cost of 80–150 million francs.[6]

The Parisian side recorded their highest average home attendance during the 2015–16 season, with 46,160 spectators per game. Meanwhile, the club's record home attendance was registered in 1983, when 49,407 spectators witnessed PSG's 2–0 win over Waterschei in the UEFA Cup Winners' Cup quarter-finals. However, the stadium's attendance record is the 50,370 spectators that watched the French rugby team beat Wales 31–12 in the 1989 Five Nations Championship.[7] 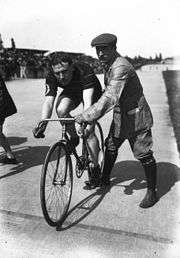 The Bordeaux–Paris race finished at the Parc in 1910.

Originally, the site on which the pitch of Paris Saint-Germain stands was a hunting ground for members of the royal family in the 18th century, before the fall of the Bastille. This anecdote gave its name to the Stade Vélodrome du Parc des Princes, inaugurated on July 18, 1897.[6]

The “Princes’ Park” began its sporting history as a velodrome in the late 19th century.[1] With 3,200 seats, the velodrome marked the history of cycling, the number one sport in France at the time.[6] The ground, which featured a cycling track until the end of the 1960s, was the finishing line for the final stage of the Tour de France from its first edition in 1903 until 1967.[4] It also boasts a long history as an international rugby venue.[2]

But it was not until 1903 that an international football match was played at the Parc des Princes. In front of 984 paying spectators, a team composed by the best Parisian players suffered a severe defeat to an England squad: 11–0 was the final score. Two years later, the French national football team contested their first ever home match against Switzerland, winning 1–0 at the Parc.[6]

Subsequently, the playground welcomed prestigious friendly games, but also many of the USFSA French championship finals, as well as the 1919 French Cup final between CASG Paris and Olympique de Paris in front of nearly 10,000 spectators. However, the Parc des Princes lost protagonism with the construction of the Stade Olympique Yves-du-Manoir for the 1924 Summer Olympics.[6] 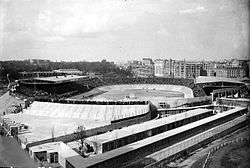 In 1925, the Paris City Council, which owns the Parc des Princes, extended the stadium lease for 40 years based on a fixed rent of 25,000 francs plus 4% share of the revenue. This allowed the Société d’Exploitation Sports-Evénements (SESE) of the Parc to carry out a thorough renovation of the sports arena. The stadium was expanded to 45,000 seats, including 26,000 covered. But the capacity was quickly reduced to 38,000 seats to improve comfort. In spite of that, Match magazine published "A new grand stage at the very gates of Paris" in its front cover of 19 April 1932.[6]

Following the Liberation of Paris and the end of World War II, the French football championship returned, with new big Parisian club Stade français-Red Star and Racing Paris regularly playing at the Parc des Princes. Still equipped with a cycling track of 454 metres,[6] the Tour de France was not the only major sporting event hosted at this stadium. It was the venue for several matches at the 1938 FIFA World Cup, as well as the 1960 and 1964 UEFA European Championships.[4] The stadium was also the scene of the first ever UEFA Champions League showpiece in 1956 when Real Madrid beat Stade de Reims 4–3.[2]

In 1965, the Paris City Council chose not to renew the stadium's lease, instead opting to build a bypass, the Périphérique, near the Parc des Princes, which lost 17,000 seats in the process. On 9 April 1965, the management of the stadium was entrusted to the French Football Federation for five years and a new Parc was to be born. Roger Taillibert was the chosen architect for the project. The construction would last 5 years, from 8 July 1967 to April 1972.[6]

PSG returned to Ligue 1 in 1974, ironically the same year that Paris FC were relegated, and moved into the Parc des Princes. Thereafter, Paris FC and Racing Paris kept playing at the Parc while they were in Ligue 1 (until 1990), but never reaching the numbers of attendance leaders PSG.[6]

A panorama overview of the Parc des Princes in 2016. 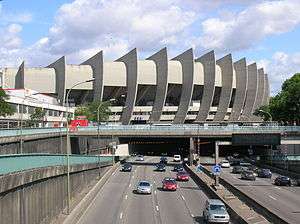 A view of the stadium's iconic “razors”.

The current stadium was completed in 1972 by architect Roger Taillibert, who also built the Olympic Stadium of Montreal. The design is innovative and allows spectators to enjoy excellent sightlines, with no seat being further than 45 meters from the pitch. Parc des Princes was the first stadium where lighting systems were integrated onto its elliptical roof, and it is still praised for its unique acoustics and its distinctive concrete ribs.[1]

Described in French as a 'caisse de résonnance' ('box of sound') due to its tight dimensions and the pressure-cooker atmosphere created by its home fans, it is one of the continent's most emblematic and historic venues.[4] Its raw concrete exterior may not be as extraordinary today, in the era of multimedia stadiums. But the “razors” supporting the concrete shell remain an icon of local skyline and the structure is aging with grace. It's a landmark and legally protected icon of French architecture.[8]

The seating bowl provides two continuous tiers without obstructed views, though some obstructions were introduced due to additional fencing of the away enclosure. Distance of end zones from the field is a disadvantage, because the stadium was designed with rugby in mind and left too much room for football configuration.[8] 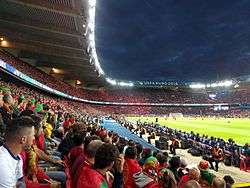 Parc des Princes during the Euro 2016.

The stadium has moved with times and adapted well to changing standards over the last forty years.[1] In 2013, Paris Saint-Germain reached an agreement with the Paris City Council, owner of the Parc des Princes, who extended their stadium lease to 2043,[9] based on a fixed rent plus a variable share of their income.[10]

Subsequently, PSG completed a three-year €75 million upgrade of the Parc des Princes (2012, 2013–2014, 2015–2016) ahead of the UEFA Euro 2016 in France.[8] The latest upgrade, unlike those at Stade Vélodrome or Stade Geoffroy-Guichard, the homes of Marseille and Saint-Étienne respectively, was achieved without partial closure of the ground. The ground in the west of Paris' centre was redeveloped under the guidance of American architect Tom Sheehan.[10]

The pitch was re-laid and raised 28 centimetres to help its growth, while two additional rows of seats were added, allowing the ground to remain at a capacity of 48,000, despite now boasting larger and more comfortable seats. Hospitality capacity has risen from 1,200 to 4,500, while some players have bought one of the private boxes that offer a great view of the pitch. The public areas around the stadium were refurbished to exploit them with fan zones.[10]

The remodelling of the stadium also saw the installation of new substitutes' benches and spacious, modern changing rooms that include warm-up and treatment rooms. The playing surface, of natural grass and featuring undersoil heating, was reinforced with artificial strands sewn into the turf to provide a faster, more even and more resistant pitch.[4]

Carrying out this renovation work saw PSG's stadium revenue swell from €20m to €100m. The club has a 30-year agreement in place with the Paris City Council, which owns the stadium, based on a fixed rent plus a variable share of their income.[10] 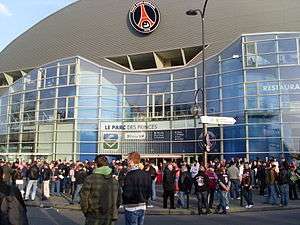 PSG want to increase the capacity of their home to 60,000 in the coming years, having just completed their latest upgrades in time for the UEFA Euro 2016.[10] If Paris is chosen as host of the 2024 Summer Olympics, PSG might receive a boost in attempt to expand the Parc des Princes by over 10,000 seats. From the start of their ownership at the capital club, Qatar Sports Investments made it clear that a larger stadium is one of the means to establish PSG as one of leading European clubs.[11]

There were two options under consideration: move to the Stade de France or expansion of the Parc des Princes. The first one is out of the picture now, especially after the Qataris pumped €75 million into redevelopments at their current stadium ahead of the Euro 2016. Expansion before the tournament proved impossible, importantly due to difficult location and protected legal status of the stadium. PSG decided to stay put and deliver the expansion in medium term. During current exhibition celebrating the club's 45th anniversary deputy CEO Jean-Claude Blanc assured plans haven’t changed.[11]