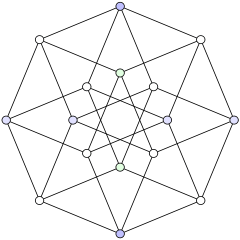 This hypercube graph is the 1-skeleton of the tesseract.

In mathematics, particularly in algebraic topology, the n-skeleton of a topological space X presented as a simplicial complex (resp. CW complex) refers to the subspace Xn that is the union of the simplices of X (resp. cells of X) of dimensions m ≤ n. In other words, given an inductive definition of a complex, the n-skeleton is obtained by stopping at the n-th step.

These subspaces increase with n. The 0-skeleton is a discrete space, and the 1-skeleton a topological graph. The skeletons of a space are used in obstruction theory, to construct spectral sequences by means of filtrations, and generally to make inductive arguments. They are particularly important when X has infinite dimension, in the sense that the Xn do not become constant as n → ∞.

In geometry, a k-skeleton of n-polytope P (functionally represented as skelk(P)) consists of all i-polytope elements of dimension up to k.[1]

can be described by a collection of sets

, together with face and degeneracy maps between them satisfying a number of equations. The idea of the n-skeleton

is to first discard the sets

and then to complete the collection of the

has a left adjoint, denoted

are comparable with the one of image functors for sheaves.) The n-skeleton of some simplicial set

has a right adjoint

. The n-coskeleton is defined as

For example, the 0-skeleton of K is the constant simplicial set defined by

. The 0-coskeleton is given by the Cech nerve

(The boundary and degeneracy morphisms are given by various projections and diagonal embeddings, respectively.)

The above constructions work for more general categories (instead of sets) as well, provided that the category has fiber products. The coskeleton is needed to define the concept of hypercovering in homotopical algebra and algebraic geometry.[3]