Main article: Characterizations of the category of topological spaces

The utility of the notion of a topology is shown by the fact that there are several equivalent definitions of this structure. Thus one chooses the axiomatisation suited for the application. The most commonly used, and the most elegant, is that in terms of open sets, but the most intuitive is that in terms of neighbourhoods and so this is given first. Note: A variety of other axiomatisations of topological spaces are listed in the Exercises of the book by Vaidyanathaswamy.

This axiomatization is due to Felix Hausdorff. Let X be a set; the elements of X are usually called points, though they can be any mathematical object. We allow X to be empty. Let N be a function assigning to each x (point) in X a non-empty collection N(x) of subsets of X. The elements of N(x) will be called neighbourhoods of x with respect to N (or, simply, neighbourhoods of x). The function N is called a neighbourhood topology if the axioms below[2] are satisfied; and then X with N is called a topological space.

The first three axioms for neighbourhoods have a clear meaning. The fourth axiom has a very important use in the structure of the theory, that of linking together the neighbourhoods of different points of X.

A standard example of such a system of neighbourhoods is for the real line R, where a subset N of R is defined to be a neighbourhood of a real number x if there is an open interval containing x and contained in N.

Given such a structure, we can define a subset U of X to be open if U is a neighbourhood of all points in U. It is a remarkable fact that the open sets then satisfy the elegant axioms given below, and that, given these axioms, we can recover the neighbourhoods satisfying the above axioms by defining N to be a neighbourhood of x if N contains an open set U such that x ∈ U.[3] 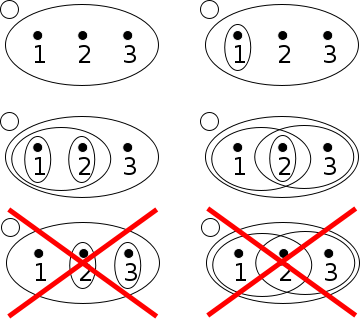 A topological space is an ordered pair (X, τ), where X is a set and τ is a collection of subsets of X, satisfying the following axioms:[4]

The elements of τ are called open sets and the collection τ is called a topology on X.

Using these axioms, another way to define a topological space is as a set X together with a collection τ of closed subsets of X. Thus the sets in the topology τ are the closed sets, and their complements in X are the open sets.

There are many other equivalent ways to define a topological space: in other words, the concepts of neighbourhood or of open or closed sets can be reconstructed from other starting points and satisfy the correct axioms.

Another way to define a topological space is by using the Kuratowski closure axioms, which define the closed sets as the fixed points of an operator on the power set of X.

A net is a generalisation of the concept of sequence. A topology is completely determined if for every net in X the set of its accumulation points is specified.

A variety of topologies can be placed on a set to form a topological space. When every set in a topology τ1 is also in a topology τ2 and τ1 is a subset of τ2, we say that τ2 is finer than τ1, and τ1 is coarser than τ2. A proof that relies only on the existence of certain open sets will also hold for any finer topology, and similarly a proof that relies only on certain sets not being open applies to any coarser topology. The terms larger and smaller are sometimes used in place of finer and coarser, respectively. The terms stronger and weaker are also used in the literature, but with little agreement on the meaning, so one should always be sure of an author's convention when reading.

A function f : X→ Y between topological spaces is called continuous if for all x ∈ X and all neighbourhoods N of f(x) there is a neighbourhood M of x such that f(M) ⊆ N. This relates easily to the usual definition in analysis. Equivalently, f is continuous if the inverse image of every open set is open.[5] This is an attempt to capture the intuition that there are no "jumps" or "separations" in the function. A homeomorphism is a bijection that is continuous and whose inverse is also continuous. Two spaces are called homeomorphic if there exists a homeomorphism between them. From the standpoint of topology, homeomorphic spaces are essentially identical.

A given set may have many different topologies. If a set is given a different topology, it is viewed as a different topological space. Any set can be given the discrete topology in which every subset is open. The only convergent sequences or nets in this topology are those that are eventually constant. Also, any set can be given the trivial topology (also called the indiscrete topology), in which only the empty set and the whole space are open. Every sequence and net in this topology converges to every point of the space. This example shows that in general topological spaces, limits of sequences need not be unique. However, often topological spaces must be Hausdorff spaces where limit points are unique.

Metric spaces embody a metric, a precise notion of distance between points.

Every metric space can be given a metric topology, in which the basic open sets are open balls defined by the metric. This is the standard topology on any normed vector space. On a finite-dimensional vector space this topology is the same for all norms.

There are many ways of defining a topology on R, the set of real numbers. The standard topology on R is generated by the open intervals. The set of all open intervals forms a base or basis for the topology, meaning that every open set is a union of some collection of sets from the base. In particular, this means that a set is open if there exists an open interval of non zero radius about every point in the set. More generally, the Euclidean spaces Rn can be given a topology. In the usual topology on Rn the basic open sets are the open balls. Similarly, C, the set of complex numbers, and Cn have a standard topology in which the basic open sets are open balls.

Proximity spaces provide a notion of closeness of two sets.

A topological space in which the points are functions is called a function space.

Cauchy spaces axiomatize the ability to test whether a net is Cauchy. Cauchy spaces provide a general setting for studying completions.

Convergence spaces capture some of the features of convergence of filters.

Grothendieck sites are categories with additional data axiomatizing whether a family of arrows covers an object. Sites are a general setting for defining sheaves.

Many sets of linear operators in functional analysis are endowed with topologies that are defined by specifying when a particular sequence of functions converges to the zero function.

Any local field has a topology native to it, and this can be extended to vector spaces over that field.

A linear graph has a natural topology that generalises many of the geometric aspects of graphs with vertices and edges.

The Sierpiński space is the simplest non-discrete topological space. It has important relations to the theory of computation and semantics.

Any set can be given the cofinite topology in which the open sets are the empty set and the sets whose complement is finite. This is the smallest T1 topology on any infinite set.

Any set can be given the cocountable topology, in which a set is defined as open if it is either empty or its complement is countable. When the set is uncountable, this topology serves as a counterexample in many situations.

The real line can also be given the lower limit topology. Here, the basic open sets are the half open intervals [a, b). This topology on R is strictly finer than the Euclidean topology defined above; a sequence converges to a point in this topology if and only if it converges from above in the Euclidean topology. This example shows that a set may have many distinct topologies defined on it.

Every subset of a topological space can be given the subspace topology in which the open sets are the intersections of the open sets of the larger space with the subset. For any indexed family of topological spaces, the product can be given the product topology, which is generated by the inverse images of open sets of the factors under the projection mappings. For example, in finite products, a basis for the product topology consists of all products of open sets. For infinite products, there is the additional requirement that in a basic open set, all but finitely many of its projections are the entire space.

The Vietoris topology on the set of all non-empty subsets of a topological space X, named for Leopold Vietoris, is generated by the following basis: for every n-tuple U1, ..., Un of open sets in X, we construct a basis set consisting of all subsets of the union of the Ui that have non-empty intersections with each Ui.

The Fell topology on the set of all non-empty closed subsets of a locally compact Polish space X is a variant of the Vietoris topology. It is generated by the following basis: for every n-tuple U1, ..., Un of open sets in X and for every compact set K, the set of all subsets of X that are disjoint from K and have nonempty intersections with each Ui is a member of the basis.

See the article on topological properties for more details and examples.