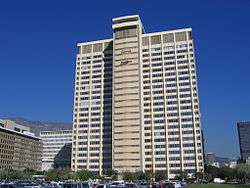 Naspers is a broad-based multinational internet and media group, offering services in more than 130 countries. Its principal operations are in ecommerce (i.e. classifieds, online retail, marketplaces, online comparison shopping, payments and online services), video entertainment and print. With a market capitalisation of over $66 billion it is the largest company in Africa and the 7th largest Internet company in the world.[2]

Major brands owned by Naspers include:

Naspers was founded in 1915, by Afrikaner Nasionale Pers (National Press) as publisher & printer of newspapers and magazines.[3][4] It decided by a group of prominent Afrikaners in December 1914 at Stellenbosch to form a publishing company that would spread a nationalistic Afrikaner message.[5]:290 It was founded by J.B.M. Hertzog who also founded the National Party, the previous year in 1914. Jannie Marais, a prominent Stellenbosch farmer purchased a quarter of 20,000 £1 shares in the new company.[5]:290 Naspers first published the Afrikaans language daily Die Burger in June 1915 which was followed by its first magazine Die Huisgenoot in 1916.[6]

In 1918 the company added book publishing to their portfolio[6] which made it one of the most significant media hubs in Africa at the time. In 1985 the company launched the pay-TV system M-Net for the first time in the region which brought about great reputation for the company & has grown into one of the largest media house's in the world. Nasionale Pers officially changed its name to the currently used 'Naspers' in 1998.[6]

Since 1994, the company is listed on the Johannesburg Stock Exchange (JSE) in South Africa and has designated to be part of the Top 10 index over the past number of years. They also have a Level I American Depository Receipt programme (ADR programme) listing on the London Stock Exchange (LSE) and trade on an over-the-counter (OTC) basis. International investors account for around 50% of their shareholder base.

The investment in Tencent has skyrocketed the Naspers stock 500% since 2010 due to the success of Tencent and has labelled the company the most valuable in Africa (May 2015) with a market cap of almost $66B. A unit of international media group Naspers, namely its subsidiary Myriad International Holdings owns 28.7% stake in Digital Sky Technologies (DST), the Russian firm behind investments in notable Internet companies like Facebook, Groupon and Zynga. China’s Tencent also made a strategic investment (to the tune of $300 million) in DST, 35% of Tencent being owned by Naspers.

Naspers involvement in the establishment of apartheid in South Africa is mired in controversy. Several directors and editors of the firm and its subsidiaries ended up in high office, including D. F. Malan, H. F. Verwoerd and P. W. Botha.

On 25 July 2015, the company issued an apology to the victims and survivors of the apartheid system, but did not acknowledge any involvement in drafting legislation and advocacy on behalf of race supremacist ideologues.