The rand takes its name from the Witwatersrand (literally "white waters' ridge" in English), the ridge upon which Johannesburg is built and where most of South Africa's gold deposits were found.

The cent was introduced in the then Union of South Africa on 14 February 1961, three months before the Republic of South Africa was established.[1] A Decimal Coinage Commission had been set up in 1956 to consider a move away from the denominations of pounds, shillings, and pence, submitting its recommendation on 8 August 1958.[2] It replaced the South African pound as legal tender, at the rate of 2 rand to 1 pound, or 10 shillings to the rand. The government introduced a mascot, Decimal Dan, "the rand-cent man" (known in Afrikaans as Dan Desimaal).[3] This was accompanied by a radio jingle, to inform the public about the new currency.[4] 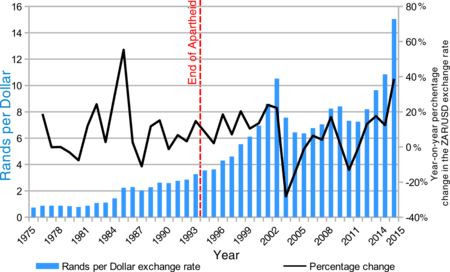 Value of the South African rand to the United States dollar from 1975 to 2015 by the blue columns: The percentage rate of change year-on-year is shown by the black line.[5]

A rand was worth US$1.40 from the time of its inception in 1961 until 1982, when mounting political pressure combined with sanctions placed against the country due to apartheid started to erode its value. The currency broke above parity with the dollar for the first time in March 1982, and continued to trade between R 1 and R 1.30 to the dollar until June 1984, when depreciation of the currency gained momentum. By February 1985, it was trading over R 2 per dollar, and in July that year, all foreign exchange trading was suspended for 3 days to try to stop the devaluation.

By the time that State President PW Botha made his Rubicon speech on 15 August 1985, it had weakened to R 2.40 per dollar. The currency recovered somewhat between 1986–88, trading near the R 2 level most of the time and even breaking beneath it sporadically. The recovery was short-lived, however, and by the end of 1989, the rand was trading at levels more than R 2.50 per dollar.

As it became clear in the early 1990s that the country was destined for black majority rule and one reform after the other was announced, uncertainty about the future of the country hastened the depreciation until the level of R 3 to the dollar was breached in November 1992. A host of local and international events influenced the currency after that, most notably the 1994 democratic election which had it weaken to over R 3.60 to the dollar, the election of Tito Mboweni as the new governor of the South African Reserve Bank, and the inauguration of President Thabo Mbeki in 1999 which had it quickly slide to over R 6 to the dollar. The controversial land reform program that was kicked off in Zimbabwe, followed by the September 11, 2001 attacks, propelled it to its weakest historical level of R 13.84 to the dollar in December 2001. 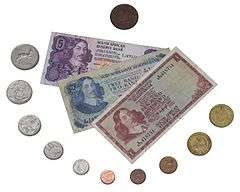 Two generations of older notes and coins: The notes of the latter of these two generations (as depicted by the R5 note in this image) were replaced with the iconic "Big Five" notes and these were recently updated to show the face of Nelson Mandela.

In sterling terms, it fell from around 9.5p to just over 7p, losing some 25% of its international trade-weighted value in just six months. Late in 2007, the rand rallied modestly to just over 8p, only to experience a precipitous slide during the first quarter of 2008.

This downward slide could be attributed to a range of factors: South Africa's worsening current account deficit, which widened to a 36‑year high of 7.3% of gross domestic product (GDP) in 2007; inflation at a five-year high of just under 9%; escalating global risk aversion as investors' concerns over the spreading impact of the subprime crisis grew; and a general flight to "safe havens", away from the perceived risks of emerging markets. The rand depreciation was exacerbated by the Eskom electricity crisis, which arose from the utility being unable to meet the country's rapidly growing energy demands.

By the end of 2014, the rand had weakened to R 15.05 per dollar, partly due to South Africa's consistent trade account deficit with the rest of the world.

From 9 December 2015 to 13 December 2015, over a four-day period, the rand dropped over 10% due to what some suspected was President Zuma's surprise announcement that he would be replacing the then-Finance Minister Nhlanhla Nene with the little-known David van Rooyen. The rapid drop in value was stemmed when the President back-tracked and announced that the better-known previous Minister of Finance, Pravin Gordhan, would instead be appointed to the post. Zuma's surprise firing of Nene damaged international confidence in the rand, with it experiencing significant exchange volatility throughout much of January 2016, reaching an all-time low of R 17.9169 to the US dollar on the 9 January 2016 before rebounding to R 16.57 later the same day.[6]

The January drop in value was also partly caused by Japanese retail investors cutting their losses in the currency to look for higher-yield investments elsewhere and due to concerns over the impact of the economic slowdown in China, South Africa's largest export partner.[7] By mid-January, economists were speculating that the rand could expect to see further volatility for the rest of 2016.[8][9] By 29 April, it reached its highest performance over the previous 5 months, exchanging at a rate of 14.16 to the United States dollar [10]

Following the United Kingdom's (UK) vote to leave the European Union (EU), the rand dropped in value over 8% against the United States dollar on the 24th June 2016, the currency's largest single-day decline since the 2008 crash.[11] This was partly due to a general global financial retreat from currencies seen as risky to the US dollar[12] and partly due to concerns over how the UK's withdrawal from the EU would impact South Africa's economy and trade relations.[11] [13]

In an effort to curb counterfeiting, a new 5-rand coin was released in August 2004. Security features introduced on the coin include a bimetal design (similar to the €1 and €2 coins, the Thai 10-baht coin, the British £2 coin, and the Canadian $2 coin), a specially serrated security groove along the rim and microlettering.[17]

The first series of rand banknotes was introduced in 1961 in denominations of 1, 2, 10, and 20 rand, with similar designs and colours to the preceding pound notes to ease the transition. They bore the image of what was believed at the time to be Jan van Riebeeck, the first V.O.C. administrator of Cape Town. It was later discovered that the image was not in fact Van Riebeeck at all.[18] Like the last pound notes, they were printed in two variants, one with English written first and the other with Afrikaans written first. This practice was continued in the 1966 series which included the first 5-rand notes, but did not include the 20-rand denomination.

The 1978 series began with denominations of 2, 5, and 10 rand, with 20 and 50 rand introduced in 1984. This series hsd a major design change. In addition, the series has only one variant for each denomination of note. Afrikaans was the first language on the 2, 10, and 50 rand, while English was the first language on 5 and 20 rand. The notes bore the image of Jan van Riebeeck. The 1-rand note was replaced by a coin.

The 2005 series has the same principal design, but with additional security features such as colour-shifting ink on the 50-rand and higher and the EURion constellation. The obverses of all denominations are printed in English, while two other languages are printed on the reverses, thus making use of all 11 official languages of South Africa.

In 2010, the South African Reserve Bank and commercial banks withdrew all 1994 series R 200 banknotes due to relatively high-quality counterfeit notes in circulation.[19]

On 11 February 2012, President Jacob Zuma announced that the country would be issuing a complete set of banknotes bearing Nelson Mandela's image.[22][23] They were entered into circulation on 6 November 2012.[24]

In 2013, the 2012 series was updated with the addition of the EURion constellation to all five notes.[25]