The National APIA Panhellenic Association (or NAPA, formerly known as the National Asian Greek Council) is an association of collegiate fraternities and sororities that was formally organized in 2006, although it began in 2005.

The founding organizations officially chartered the National APIA Panhellenic Association on August 12, 2006. The purpose of the association is to create an umbrella organization that can unite Asian Fraternities and Sororities onto common causes and facilitate communication between the various organizations. 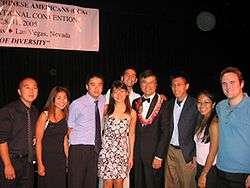 The National Asian Pacific Islander American Panhellenic Association (NAPA) began in the summer of 2004 when a group of 14 APIA fraternities and sororities joined together to form the APIA Greek Alliance (AGA). Formed as a partnership in a grassroots “Get Out the Vote” campaign with APIA Vote, an organization that promotes civic participation among Asian and Pacific Islander Americans, the members of the AGA registered over 8,000 new voters. Seeing the successful collaboration’s potential impact on the APIA community and on college/university campuses, the group collaborated on further projects, including Tsunami Relief and Hurricane Katrina Relief. 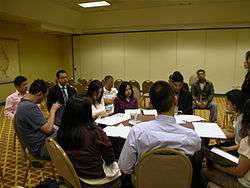 NAPA's Board of Presidents in a meeting session.

Note: Positions on the Executive Board not listed here includes the Board of Presidents and the Advisory Board.[2]

The members of the National Asian Pacific Islander American Panhellenic Association are shown below in alphabetical order.