The expressway project concept was proposed by former Chief Minister of Uttar Pradesh Mayawati, its construction began in December 2007, completed about two years ahead of its original target completion date,[2] and inaugurated on 9 August 2012 by Chief Minister Akhilesh Yadav.[3]

The expressway starts from Greater Noida and ends at Kuberpur on NH 2 towards Kanpur and Agra. In addition, a total of 13 service roads of about 168 km have been built for local commuters to access the expressway.[4] 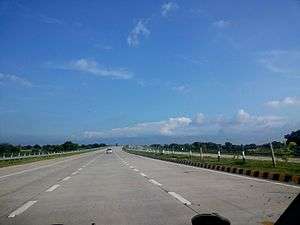 Yamuna Expressway connects Delhi and Agra. The tollway opened in 2012.

It was conceived with the idea of reducing the travel time between Delhi and Agra. But the project could not start because of a change of government in the state in 2003 and also it wasn't financially viable back in 2003. The project was reactivated in 2007 when Mayawati regained power and was renamed Yamuna Expressway.[5]

Yamuna Expressway Project was implemented by Jaypee Group.[6] In May 2012, Jaypee Group informed state government officials that construction of the expressway had been completed.[7] The Yamuna Expressway was formally inaugurated on 9 August 2012 by Chief Minister Akhilesh Yadav, via videoconference from Lucknow,[3] about two years behind of its original target completion date.[8]

In a first for military aviation in India, Indian Air Force on May 21, 2015 successfully landed a French Dassault Mirage-2000 on the Yamuna Expressway near Raya village, Mathura, at about 6.40 am. The drill was part of more elaborate trials to see how many other highways can be used for emergency landing of defence aircraft. The next stretch on sight is three km of the Agra-Lucknow Greenfield Expressway.

The Yamuna Expressway has SOS booths along the route besides a toll free helpline. CCTV cameras are installed every 5 km (3.1 mi) along the expressway for safety and accident assistance; mobile radars to monitor compliance with minimum and maximum speed limits; and one highway patrol every 25 km (16 mi). The Expressway is expected to be used by over 100,000 vehicles every day, and reduce travel times between Greater Noida and Agra from 4 hours to 100 minutes.[12] Petrol pump at the halfway point at Tappal is open. Tappal 60 km (37 mi) from Noida Sec. 37 i.e. botanical garden or Noida city center. 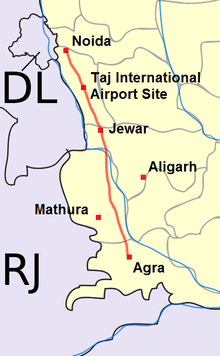 Yamuna Expressway within the state of Uttar Pradesh 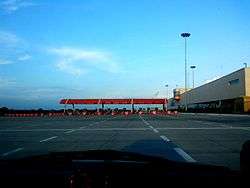 A toll plaza on Yamuna Expressway

The Expressway was developed in three phases:

All figures in Indian Rupees.

A 285 km (177 mi) Agra Lucknow Expressway Project is being constructed with estimation budget of Rs.15,000 crore which would extend YEA to lucknow enabling fast transit. Agra-Lucknow Expressway will extend the Yamuna Expressway in Agra on Firozabad road, touch the proposed (under consideration) international airport at Tundla and also connect to the proposed Sanjay Khan project of a theme park of seven cities.

Metro connectivity to Yamuna Expressway has got a green signal from the Yamuna Expressway Industrial Development Authority (YEIDA). The metro rail will run from the proposed metro station at Pari Chowk till Yamuna Expressway Sector 18 and 20. These are the 1st inhabited sectors urbanized by the authority and at present are under construction.[16]