This article is about national highways. For expressways, see Expressways in India. 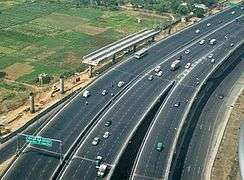 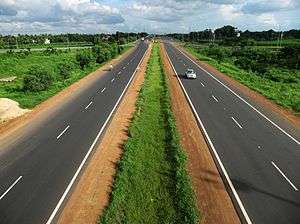 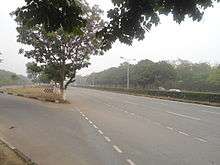 In India, National Highways are at-grade roads whereas Express Highways, commonly known as Expressways, are controlled-access highways, mostly 6-lane or above, where entrance and exit is controlled by the use of slip roads (ramps) that are incorporated into the design of the highway. The highways do not have shoulder lanes. The speed on highway is mostly unregulated and is mostly slowed by heavy trucks in middle lanes. The highways are also used by pedestrians and cyclists creating dangerous situations.

The National Highways Authority of India (NHAI) is the nodal agency responsible for building, upgrading and maintaining most of the national highways network. It operates under the Ministry of Road Transport and Highways. The National Highways Development Project (NHDP) is a major effort to expand and upgrade the network of highways. NHAI often uses a public-private partnership model for highway development, maintenance and toll-collection.

While national highways constitute 1.7% of Indian roads, they carry 40% of the traffic.[3] The majority of existing national highways are two-lane roads (one lane in each direction), though much of this is being expanded to four-lanes, and some to six or more lanes. Some sections of the network are toll roads. Over 30,000 km (19,000 mi) of new highways are planned or under construction as part of the NHDP, as of 2011. This includes over 2,600 km (1,600 mi) of expressways currently under construction. 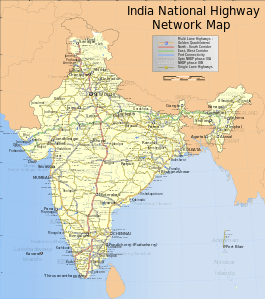 India has the distinction of having the world's second highest-altitude motor highway— Leh-Manali Highway, connecting Shimla to Leh in Ladakh, Kashmir. 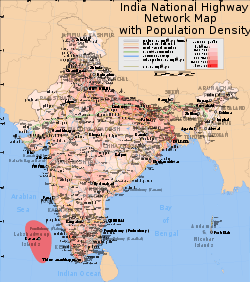 National highways form the economic backbone of the country and have often facilitated development along their routes, and many new towns have sprung up along major highways. Highways also have large numbers of small restaurants and inns (known as dhabas) along their length. They serve popular local cuisine and serve as truck stops.

Ministry of Road Transport and Highways, Government of India adopted a new systematic numbering of national highways in April 2010. The new system will indicate the direction of national highways whether it is east-west (odd numbers) or north-south (even numbers) and also the geographical region where they are located, increasing from east to west and from north to south.[6]

Under former Prime Minister Atal Bihari Vajpayee India launched a massive programme of highway upgrades, called the National Highways Development Project (NHDP), in which the main north-south and east-west connecting corridors and highways connecting the four metropolitan cities (Delhi, Mumbai, Chennai and Kolkata) have been fully paved and widened into four-lane highways. Some of the busier national highway sectors in India have been converted to four or six lane expressways – for example, Delhi-Agra, Delhi-Jaipur, Ahmedabad-Vadodara, Mumbai-Pune, Mumbai-Surat, Bangalore-Mysore, Bangalore-Chennai, Chennai-Tada, Delhi-Meerut Hyderabad-Vijayawada, Bhubaneswar-Puri and Guntur-Vijayawada. Phase V of the National Highway Development Project is to convert all 6,000 km (3,700 mi) of the Golden Quadrilateral Highways to 6-lane highways/expressways by 2012. 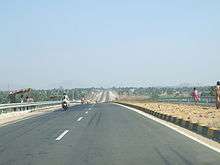 NH44 section between Bangalore and Karnataka - Andhra Pradesh border. It is part of the North South Corridor.