National Mobilization Committee to End the War in Vietnam

On April 15, 1967, the Spring Mobilization's massive march against the Vietnam War from Central Park to the United Nations attracted hundreds of thousands of people, including Dr. Martin Luther King, Jr., Harry Belafonte, James Bevel, and Dr. Benjamin Spock, who marched and spoke at the event. During the event many draft cards were burned, according to the New York Times.[1] A simultaneous march in San Francisco was attended by Coretta Scott King.

At the New York march its last speaker, James Bevel, the Spring Mobilization's chairman and initiator of the march on the U.N. (until Bevel came aboard at the invitation of A. J. Muste and David Dellinger the plan was for just an April 15 rally in Central Park), made an impromptu announcement that the next major anti-war gathering would be in Washington D.C.[2]

Bevel's announcement brought about the Spring Mobilization Conference, a gathering of 700 antiwar activists held in Washington D.C. May 20–21, 1967, called to evaluate April's massive antiwar demonstrations. It was organized to chart a future course for the antiwar movement, and set another large antiwar action for the fall of 1967 and created an administrative committee - the National Mobilization Committee to End the War in Vietnam - to plan it. 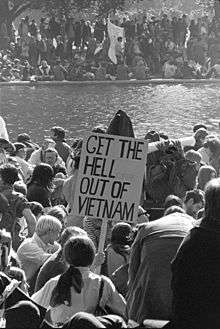 Vietnam War protestors at the 1967 March on the Pentagon.

The Mobe then planned and organized a large demonstration for Washington D.C. on October 21, 1967. This demonstration was a rally at West Potomac Park near the Lincoln Memorial and a march to the Pentagon, where another rally would be held in a parking lot, followed by civil disobedience on the steps of the Pentagon itself. The action was known as the "March on the Pentagon."

Hoping to attract young, educated college students, Mobe coordinator David Dellinger appointed Jerry Rubin, who led the large Vietnam Day Committee at the University of California, Berkeley,[3] to organize the march.[3] The initial D.C. rally, which was galvanized by a concert performance from counterculture folk singer Phil Ochs,[4] drew approximately 70,000 participants at the Lincoln Memorial.[5] Following Ochs' concert, as well as speeches from Dellinger and Dr. Spock,[6] around 50,000 of those attending were then led by social activist Abbie Hoffman and marched from the Lincoln Memorial to The Pentagon in nearby Arlington, Virginia to participate in a second rally.[3]

About 650 people, including novelist Norman Mailer, were arrested for civil disobedience on the steps of the Pentagon. A few individuals such as Allen Ginsberg, Ed Sanders, Abbie Hoffman and Jerry Rubin (Hoffman and Rubin would co-found the Yippies later in '67) attempted by means of meditation and chanting to "levitate" the building and "exorcise the evil within." These events were chronicled by Norman Mailer in his non-fiction novel The Armies of the Night.

Following the Pentagon demonstration, the Mobe began discussion and planning for demonstrations at the 1968 Democratic National Convention, to be held in Chicago, where President Lyndon B. Johnson was expected to be nominated for a second term.

Tom Hayden and Rennie Davis were the key Mobe organizers for the Chicago demonstration, and would later be indicted for conspiracy and inciting a riot as members of the Chicago Seven. The Chicago demonstrations drew only 10,000 participants because it was widely anticipated that the mayor of Chicago, Richard J. Daley, would deploy his police to prevent marches to the site of the Convention.

Norman Mailer wrote a non-fiction novel about both the 1968 Democrat and Republican Conventions entitled Miami and the Siege of Chicago.

Following the election of Richard M. Nixon, the Mobe organized a "counter-inaugural" to take place in Washington D.C. on the day of Nixon's inauguration. This demonstration also attracted about 10,000 people and was accompanied by street violence.

The National Mobilization Committee to End the War in Vietnam then disbanded.

Future national marches against the Vietnam war would be organized by other groups. The similarly named and inspired New Mobilization Committee to End the War in Vietnam (New Mobe) was founded at a conference at Case Western Reserve University in July 1969, and, together with the Vietnam Moratorium Committee and the Student Mobilization Committee (SMC), organized the October 15, 1969 Moratorium to End the War in Vietnam which resulted in large demonstrations against the Vietnam War held nationwide.[7] The groups then organized another large demonstration in Washington D.C. to occur a month later, on November 15, 1969, which was also attend by a large crowd.