Seale is the eldest of three children. He has a younger brother, Jon, and a younger sister, Betty.[3] He was born in Liberty, Texas to George Seale, a carpenter, and Thelma Seale (née Traylor), a homemaker.[4] The Seale family lived in poverty during most of Bobby Seale's early life. After moving around Texas, first to Dallas, then to San Antonio, and Port Arthur, his family eventually relocated to Oakland, California when he was eight years old. Seale attended Berkeley High School, then dropped out and joined the United States Air Force in 1955.[5] He was discharged for bad conduct three years after joining for fighting with a commanding officer at Ellsworth Air Force Base in South Dakota.[4] After being dishonorably discharged from the Air Force, Seale worked as a sheet metal mechanic for various aerospace plants while earning his high school diploma at night.[6] "I worked in every major aircraft plant and aircraft corporation, even those with government contracts. I was a top-flight sheet-metal mechanic"[7] After earning his high school diploma, Seale attended Merritt Community College until 1962 " where he studied engineering and politics.[8]

While in college, Bobby Seale joined the Afro-American Association (AAA), a group on campus devoted to advocating black separatism. "I wanted to be an engineer when I went to college, but I got shifted right away since I became interested in American Black History and trying to solve some of the problems." [9] Through the AAA group, Seale met Huey P. Newton. In June 1966, Seale began working at the North Oakland Neighborhood Anti-Poverty Center in their summer youth program. Seale's objective was to teach the youth in the program Black American History and teach them a degree of responsibility in terms of the people living in their communities. While working in the program, Seale met Bobby Hutton, the first member of the Black Panther Party.[10]

While in college, Seale also became a member of Phi Beta Sigma fraternity.[11] He married Artie Seale, and had a son, Malik Nkrumah Stagolee Seale.[12]

Bobby Seale and Huey P. Newton were heavily inspired by the teachings of human rights leader and activist Malcolm X, who was assassinated in 1965. The two joined together in October 1966 to create the Black Panther Party for Self-Defense, which adopted the slain activist's slogan "freedom by any means necessary" as their own. Before the Black Panther Party, Seale and Newton created a group known as the Soul Students Advisory Council. The group was organized so to allow it to function through "ultra-democracy," defined as individualism manifesting itself as an aversion to discipline. "The goal was to develop a college campus group that would help develop leadership; to go back to the black community and serve the black community in a revolutionary fashion".[13] Seale and Newton then created the Black Panther Party to organize the black community and express their desires and needs in order to resist the racism and classism perpetuated by the system. Seale described the Panthers as "an organization that represents black people and many white radicals relate to this and understand that the Black Panther Party is a righteous revolutionary front against this racist decadent, capitalistic system."[14]

Seale and Newton together wrote the doctrines "What We Want Now!" which Seale said were intended to be "the practical, specific things we need and that should exist" and "What We Believe," which outlines the philosophical principles of the Black Panther Party in order to educate the people and disseminate information about the specifics of the party's platform.[13] These writings were part of the party's Ten-Point Program, also known as the "The Black Panther Party for Self-Defense Ten-Point Platform and Program," a set of guidelines to the Black Panther Party's ideals and ways of operation. Seale and Newton decided to name Newton Minister of Defense and Seale became the Chairman of the party.[15] During his time with the Panthers, he underwent surveillance by the Federal Bureau of Investigation (FBI) as part of its COINTELPRO program,[16] which conducted covert (and at times illegal) projects surveilling, infiltrating, discrediting and disrupting domestic political organizations.[17]

In 1968, Seale wrote, Seize the Time: The Story of the Black Panther Party and Huey P. Newton, published in 1970.[7] The book describes the evolution of the Black Panthers and the continuous struggle for human liberation, and derives from tape recordings made by Seale between 1968 and 1970. Its purpose was to give a better insight into the Black Panthers, essentially providing an understanding of what the party does, who is involved, and how they help the freedom movement. It shows the chronological development of the Panther Party while delivering a background on the oppressions of Afro-Americans in an unjust society.[18] 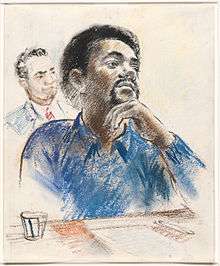 Seale on trial in 1970, State Attorney Arnold Markle in the background.

Bobby Seale was one of the original "Chicago Eight" defendants charged with conspiracy and inciting a riot in the wake of the 1968 Democratic National Convention in Chicago. Bobby Seale, while in prison, stated, "To be a Revolutionary is to be an Enemy of the state. To be arrested for this struggle is to be a Political Prisoner."[19] The evidence against Seale was slim, as he was a last-minute replacement for activist Eldridge Cleaver and had been in Chicago for only two days of the convention.[20] During the trial, one of Seale's many vociferous protests led Judge Julius Hoffman to have him bound and gagged,[21] as commemorated in the song "Chicago" written by Graham Nash[22] and mentioned in the poem and song "H2Ogate Blues" by Gil Scott-Heron.[23] On November 5, 1969, Judge Hoffman sentenced him to four years in prison for 16 counts of contempt, each count for three months of his imprisonment because of his outbursts during the trial, and eventually ordered Seale severed from the case, leading to the procedings againts the remaining defendants being renamed the "Chicago Seven".[24] The trial of the "Chicago Eight" was depicted in the 1987 HBO television movie Conspiracy: The Trial of the Chicago 8, whose script relied heavily upon transcripts from the court proceedings. Seale was portrayed by actor Carl Lumbly.[25]

While serving his four-year sentence, Seale was put on trial again in 1970 in the New Haven Black Panther trials. Several officers of the Panther organization had murdered a fellow Panther, Alex Rackley, who had confessed under torture to being a police informant.[26] The leader of the murder plan, George Sams, Jr., turned state's evidence and testified that Seale, who had visited New Haven only hours before the murder, had ordered him to kill Rackley. The trials were accompanied by a large demonstration in New Haven on May Day, 1970, which coincided with the beginning of the American college student strike of 1970. The jury was unable to reach a verdict in Seale's trial, and the charges were eventually dropped. The government suspended his convictions and Seale was released from prison in 1972.[4] While Seale was in prison, his wife, Artie, became pregnant, allegedly by fellow Panther Fred Bennett. Bennett’s murdered and mutilated remains were found in a suspected Panther hideout in April 1971.[27] Seale was implicated in the murder, with police suspecting he had ordered it in retaliation for the affair, but no charges were pressed.[28] Seale wrote an article titled "One Less Oppressor" that shows appreciation of the murder of Bennett and stated, "The people have now come to realize that the only way to deal with the oppressor is to deal on our own terms and this was done."[29]

After the release of Seale, the Black Panther Party wanted to clean up their reputation and announced that they would be instituting a breakfast program. Their slogan for this program was, "The Youth We Are Feeding Will Surely Feed the Revolution". The Panthers helped prepare and serve breakfast to the children at the Concord Baptist Church near Berkeley, California. They distributed breakfast daily at the church and later expanded to distributing breakfast to San Francisco at the Fillmore Auditorium.[30] Seale also ran for Mayor of Oakland, California in 1973.[31] He received the second-most votes in a field of nine candidates[4] but ultimately lost in a run-off with incumbent Mayor John Reading.[31] In 1974, Seale and Huey Newton argued over a proposed movie about the Panthers that Newton wanted Bert Schneider to produce. According to several accounts, the argument escalated to a fight where Newton, backed by his armed bodyguards, allegedly beat Seale with a bullwhip so badly that Seale required extensive medical treatment for his injuries. Afterwards, he went into hiding for nearly a year, and ended his affiliation with the Party in 1974.[32][33] Seale denied any such physical altercation took place, dismissing rumors that he and Newton were ever less than friends.[34]

Life after the Black Panthers

In 1998, Seale appeared on the television documentary series Cold War, where he discussed the events of the 1960s. In 2002, Seale began dedicating his time to Reach!, a group focused on youth education programs. He has also taught black studies at Temple University in Philadelphia. Seale appears in Roberto Bolaño's last novel, 2666, renamed as Barry Seaman. Also in 2002, Seale moved back to Oakland, working with young political advocates to influence social change.[37] In 2006, he appeared in the documentary The U.S. vs. John Lennon to discuss his friendship with John Lennon. Seale has also visited over 500 colleges to share his personal experiences as a Black Panther and to give advice to students interested in community organizing and social justice.

Currently, he is raising money through sales of his books, posters, and other merchandise to produce Seize the Time: The Eighth Defendant, a movie that will be about Seale's experiences as the founding Chairman of the Black Panther Party. It is planned to go into detail about his interactions with the 49 Black Panther chapters that were established throughout the United States. He also makes money from various charity fundraisers.