For other uses, see National Museum of Natural History (disambiguation). 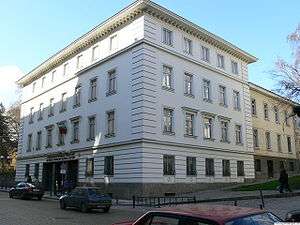 The National Museum of Natural History (Bulgarian: Национален природонаучен музей, Natsionalen prirodonauchen muzey; abbreviated НПМ, NMNHS) of Bulgaria is a museum of natural history located in Sofia, the capital of the country on "Tzar Osvoboditel" str. next to the Russian church. Founded in 1889, it is affiliated with the Bulgarian Academy of Sciences, and is the first and largest museum of this kind in the Balkans.

The museum's collection includes over 400 stuffed mammals, over 1,200 species of birds, hundreds of thousands of insects and other invertebrata, as well as samples of about one quarter of the world's mineral species.

Today's National Museum of Natural History was founded in 1889 as the Natural History Museum of Knyaz Ferdinand of Bulgaria, with various foreign and Bulgarian specialists (e.g. Ivan Buresh, director from 1913 to 1947) serving as its directors until 1947, when the museum became part of the Bulgarian Academy of Sciences' Zoological Institute. The museum became autonomous as a separate institute in the BAS system in 1974. In 1992, the Asenovgrad Palaeontology Museum, an NMNH branch in Asenovgrad, was formed.