The Bulgarian Academy of Sciences (abbreviated BAS, in Bulgarian: Българска академия на науките, Balgarska akademiya na naukite, abbreviated БАН) is the National Academy of Bulgaria, established in 1869. The Academy, located in Sofia, is autonomous and has a Society of Academicians, Correspondent Members and Foreign Members. It publishes and circulates different scientific works, encyclopedias, dictionaries and journals, and runs its own publishing house.

Stefan Vodenicharov has been president of the BAS since 2012. Its budget in 2009 was 84 million leva, or 42.7 million euro. The Bulgarian Space Agency, part of the BAS, has a budget of 1 million euro. 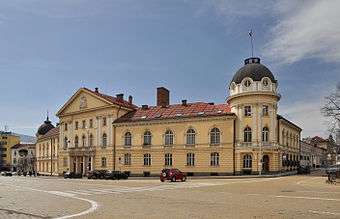 Headquarters of BAS at Tzar Osvoboditel Blvd near the Bulgarian Parliament.

As Bulgaria was part of the Ottoman Empire, Bulgarian émigrés founded the Bulgarian Literary Society on 26 September 1869, in Brăila in the Kingdom of Romania. The first Statutes accepted were:

The following year, the Literary Society began issuing the Periodical Journal, its official publication, and in 1871 elected its first honorary member - Gavril Krastevich.

In 1878, shortly after Bulgaria's liberation from Ottoman rule, the General Assembly voted to move the seat of the Society from Brăila to Sofia, and on 1 March 1893 the BLS moved into its own building, right next to where the Bulgarian Parliament is seated. The BLS headquarters were completed in 1892. The building was designed by architect Hermann Mayer[1] and was expanded during the 1920s.[2]

The Bulgarian Literary Society adopted its present-day name in 1911, and Ivan Geshov became the Academy's first president. The BAS became a member of the Union of Slavonic Academies and Scientific Communities in 1913, and was accepted as member of the International Council of Scientific Unions in 1931.

Academia Peak and Camp Academia on Livingston Island in the South Shetland Islands, Antarctica are named for the Bulgarian Academy of Sciences in appreciation of Academy’s contribution to the Antarctic exploration.