The national emblem of Belarus, which replaced the historic Pahonia arms in a 1995 referendum, features a ribbon in the colours of the national flag, a map of Belarus, wheat ears and a red star. It is sometimes referred to as the coat of arms of Belarus, although this is incorrect due to the lack of several heraldic elements. The emblem is an allusion to one that was used by the Byelorussian SSR, designed by Ivan Dubasov in 1950, with the biggest change being a replacement of the hammer and sickle with an outline map of Belarus. Emblems reminiscent of the times of the Soviet Union are also used in Macedonia, Tajikistan, Uzbekistan and the region of Transnistria.

The emblem on a building in Minsk

In the center of the emblem sits a green outline of Belarus, superimposed over the rays of a golden sun. The sun is partially covered by a globe, with the landmass (part of Eurasia) in purple and waters in blue. Lining the left and right sides of the emblem are stalks of wheat, superimposed with flowers. Clovers adorn the left wheat stalks; flax flowers adorn the right. Wrapped around the wheat stalks is a red and green ribbon bearing the colours of the flag of Belarus; the ribbon meets at the base of the emblem, where the name Republic of Belarus (Рэспублiка Беларусь) is inscribed in gold in the Belarusian language. At the top of the emblem there is a five-pointed red star.[3]

The elements that comprise the state emblem are not tied to any "official" symbolism. The design of the emblem of the Byelorussian SSR was used as the basis for the current Belarusian emblem; the primary difference between the two is that the Byelorussian SSR emblem contains more references to Communism, such as the Communist symbol of hammer and sickle and pure red ribbon, which the modern emblem does not, replaced with the outline and the flag of Belarus, respectively, however it still retains the communist red star, the globe and the wheat bundles, which are also typical of Soviet emblems and still is very Soviet in nature. 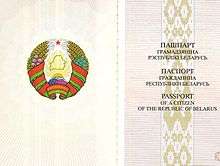 Belarusian passport bearing the state emblem on the left. 2009

The current law regulating the design and use of the Belarusian emblem was passed on July 5, 2004. Article 9 of Chapter 3 of Law No. 301-3 begins by describing the official drawing of the Belarusian arms and regulates on its proper design. Officially, the arms can be drawn in full colour, monochrome or using two colors. Article 10 states that the national emblem must be displayed at specified locations on a continual basis, such as the residences of the Belarusian leader, the chamber of the National Assembly and at governmental offices of national and regional levels. The emblem can also be used on documents issued by the government, including money, passports and official letterheads.[4]

The law also restricts the use of the emblem in other contexts—e.g. cities, towns or oblasts may not adopt a coat of arms or emblem using the national emblem either completely or in part. Furthermore, organizations not listed in the Law on State Symbols may only use the emblem by permission. The emblem can be used by both foreigners and citizens of Belarus, as long as the symbol is displayed with respect, although citizens may not use the state emblem on letterheads or business cards if they are not agents of the government.[4]

In addition to standard usages listed in the law, the emblem has been used in various other circumstances. The emblem is displayed, along with the national flag, at the beginning and the end of a video clip with the Belarusian anthem My Belarusy, regularly played on Belarusian television. Another use of the emblem is on ballot boxes and campaign mailings used during national and local elections. The emblem also appears on Belarus's border posts.[5]

The Pahonia was used as an official coat of the Grand Duchy of Lithuania since 1366 after being first used as the personal arms of Algirdas, the Grand Duke of Lithuania. The arms continued to be used until Grand Duchy of Lithuania were annexed by the Russian Empire in 1795, though the arms was incorporated into the Imperial coat of arms.[6] The idea of return to the historic national symbol was pursued by Belarusian poet Maksim Bahdanovič in his poem "Pahonia". The arms was again used in 1918 when the short-lived Belarusian People's Republic used the Pahonia as part of their emblem.

More recently, the Pahonia was the official coat of arms starting in 1991, when Belarus declared itself independent of the Soviet Union. It was replaced by the current emblem following a controversial referendum held in 1995.

Since it was dropped as the official emblem of Belarus, opposition groups such as the Belarusian People's Front have used the Pahonia as part of their own party symbols or used them as a form of protest against Belarusian leader Alexander Lukashenko.[7]

Emblem of the Byelorussian SSR

From 1920 until the fall of the Soviet Union in 1991, the Byelorussian SSR used an emblem instead of a coat of arms. The first emblem used by Soviet Byelorussia was adopted in 1919 and is similar to the contemporary insignia of the Russian and Ukrainian republics. The central part of the emblem is a stylized red shield, showing a golden sun rising from the base. Above the sun is a crossed golden hammer and sickle, symbolizing unity between workers and peasants. Above the hammer and sickle, the letters Б.С.С.Р are shown in black, denoting the name of the republic. БССР (BSSR) is an abbreviation for the full name of the republic; "Беларуская Савецкая Сацыялістычная Рэспубліка", the Byelorussian Soviet Socialist Republic. The shield is framed by ears of wheat meeting at the its base and featuring a red ribbon inscribed in black with the state motto of the Soviet Union, "Workers of the World, Unite!" The text is written in the Belarusian language.[8]

In 1937, this emblem was replaced by a new one, removing the shield and including more text. The right side of the emblem features oak leaves and the left features wheat ears with clovers placed on top. In the center of the emblem, a sun is rising behind a profile of Earth. A hammer, sickle and red star appears over the sun. Around the ears of wheat and leaves of oak is a red ribbon, featuring the phrase "Workers of the World, Unite!" written (from left to right) in Belarusian, Yiddish, Polish and Russian. The initials Б.С.С.Р are shown at its base denoting the name of the republic. Ten years before in 1927, the arms was the same except for the wording on the bottom ribbon. Instead of the letters reading БССР, the letters read "С.С.Р.Б", which stood for the Soviet Socialist Republic of Byelorussia.[9]

This emblem was in turn replaced by a new one in 1950. The central feature of this symbol is a crossed hammer and sickle, a universal Communist symbol symbolizing the unity of workers and peasants. Below this symbol, a sun is shown rising behind a globe. The insignia is framed by ears of wheat, each ear ending in flowers; clover on the left and flax on the right. A red ribbon is wrapped around the ears of wheat, reminiscent of the red flag used by the Communist movement. The base of the emblem shows the letters БССР. The ribbon features the phrase Workers of the World, Unite! The left side inscribed in Belarusian, the right side in Russian. The red star of Communism is featured above the hammer and sickle. The 1950 version was designed by Ivan Dubasov, a People's Artist of the USSR.[9] Article 119 of the Constitution of the Byelorussian SSR defines the design of the emblem.[10]

On May 14, 1995, a referendum was conducted in all regions of Belarus. Out of four questions, one was the following: "Do you support the introduction of the new national symbols?" With a voter turnout of 64.7%, the new state symbols were approved by a ratio of 3:1 (75.1% to 24.9%). The way the referendum was carried out was heavily criticized by the opposition, including the exact wording of the question about the national insignia.[11] Supporters of the Pahonia also criticize that the Pahonia and the former white-red-white flag were compared to ones, used by collaboration forces, in propaganda that was published during the run-up to the vote.[12] The comparison was made due to the white, red, white flag and Pahonia being used on the patches and symbols of the Belarusian Central Rada, the Belarusian government under the control of Nazi Germany. Alexander Lukashenko claimed the selection of the Soviet-inspired symbols as a victory, especially to his Great Patriotic War veteran base, by saying "we have returned to you the flag of the country for which you fought. We have returned to you both memory and a sense of human pride."[13]