Coat of arms of Lithuania 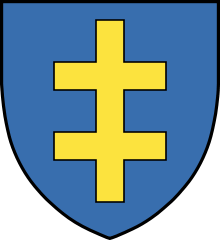 The coat of arms of Lithuania, consisting of an armour-clad knight on horseback holding a sword and shield, is also known as Vytis (pronounced: [ʋiːt̪ɪs] (coined). It is one of very few containing symbolism adopted from ducal portrait seals rather than from coats of arms of dynasties, which is the case for most European countries.[1]

Article 15 of the Constitution of Lithuania, approved by national referendum in 1992, stipulates, "The Coat of Arms of the State shall be a white Vytis on a red field". Heraldic shield features the field Gules (red) with an armoured knight on a horse salient Argent (white). The knight is holding in his dexter hand a sword Argent above his head. A shield Azure hangs on the sinister shoulder of the knight with a double cross Or (yellow) on it. The horse saddle, straps, and belts are Azure. The hilt of the sword and the fastening of the sheath, the stirrups, the curb bits of the bridle, the horseshoes, as well as the decoration of the harness, are Or (gold).

The blazon is the following: Gules, a knight armed cap-à-pie mounted on a horse salient argent, brandishing a sword proper and maintaining a shield azure charged with a cross of Lorraine Or. 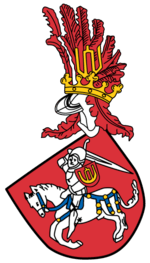 Coat of arms of Lithuania redrawn from the 15th-century Codex Bergshammar. 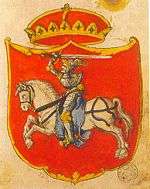 Lithuania's coat of arms with historical colors (argent, or, gules and azure) from around 1555.

The knight on horseback without a specific name was mentioned in the Tobolsk Chronicle as a symbol of Narimantas. The charging knight is depicted on the seal of Grand Duke of Lithuania, Algirdas, dated 1366. The earliest coins featuring the knight come also from the last quarter of the 14th century; the other side of these coins depicts Columns of Gediminas. The emblem was handed down through the generations, from Algirdas to his son, Grand Duke Jogaila, then to Jogaila's cousin Grand Duke Vytautas and others. In the 14th century, the knight was featured on a heraldic shield, first on Jogaila's seal in 1386 or 1387, and also on the seal of Vytautas in 1401. At the Battle of Grunwald in 1410, the major victory of the united Polish–Lithuanian army against the Teutonic Order, thirty Lithuanian regiments out of the total forty were flying the "charging knight" banner.

At first, the charging knight was depicted riding to left or right, and holding a lance instead of the sword. Two seals of Lengvenis of 1385 and of 1388 exhibit this change.[2] The lance was more often exhibited on the seals of Skirgaila and Kaributas. By the first half of the 15th century, the rider is always shown riding to the left (as seen by the viewer) with a sword in his raised hand and a shield in the left hand (if he rode to the right, the shield would be concealed by the rider). During the 15th century, the colors of the seal became uniform: a white (silver) charging knight holding a sword and a shield on a red field.

Use as a state symbol

By the 15th century, the heraldic knight became representative of the Grand Duchy of Lithuania and of its central part, the Duchy of Vilnius. Its name Pogonia is first recorded in the Statutes of Lithuania of 1588.[3]

In the 16th century, the knight's shield was depicted as blue with a gold double cross, constructed in such a way that all six ends are equal in length. The double cross was attributed to Jogaila, who was said to have adopted it after his baptism as Ladislaus and marriage with Hungarian princess and King of Poland Hedvig Angevin in 1386. It is derived from the Hungarian cross, the assumed coat of arms of Saint Ladislaus, King of Hungary, which is in turn a derivative of the Patriarchal cross.

The Renaissance introduced minor stylistic changes and variations: long feathers waving from the tip of the knight's helm, a long saddle-cloth, the horse tail turned upwards and shaped as nosegay. With these changes the coat of arms remained the State symbol of the Grand Duchy of Lithuania until 1795, when Lithuania was annexed to the Russian Empire. Traditional Lithuania's coat of arms was abolished. However, in 1845 tsar Nicholas I confirmed a coat of arms for the Vilna Governorate that closely resembled the historical one. A notable later change was the replacement of the double cross with the red Byzantine cross on the knight's shield.

Vytis as depicted on Gate of Dawn

At first, the charging knight was interpreted as the ruler of the country. As time passed, he became a knight who is chasing intruders out of his native country. Such an interpretation was especially popular in the 19th century, and the first half of the 20th century, when Lithuania was part of the Russian Empire and sought its independence. 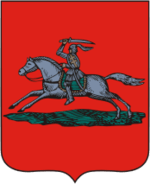 When Lithuania restored its independence in 1918–1920, several artists produced different versions of the coat of arms. Almost all versions included a scabbard, which is not found in earliest specimens. A romanticized version by Antanas Žmuidzinavičius became the most popular. The horse appeared to be flying in the air (courant). The gear was very decorative. For example, the saddle blanket was very long and divided into three parts. There was no uniform or official version of the coat of arms. To address popular complaints, in 1929 a special commission was set up to analyze the best 16th century specimens of Vytis to design an official state emblem. Mstislav Dobuzhinsky was the chief artist. The commission worked for 5 years, but their version of the coat of arms was not officially confirmed while Juozas Zikaras' version was introduced for the official use on coins. 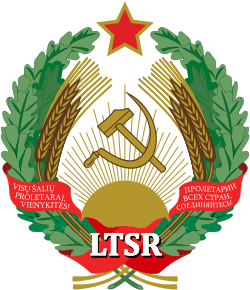 The Vytis was the state emblem of the Republic of Lithuania until 1940, when the Republic was annexed by the Soviet Union and all national insignia were outlawed. With the dissolution of the Soviet Union, the Vytis, together with the Columns of Gediminas and the national flag, became symbols of the independence movement in Lithuania. In 1988, the Vytis was legalized. On March 11, 1990 Lithuania declared its independence and restored all of its pre-war national symbols, including the historical coat of arms. On March 20, 1990 the Supreme Council of Lithuania approved the description of the State's coat of arms and determined the principal regulations for its use. The design was based on Juozas Zikaras' design that was used on all litas coins in the interwar period. This was to demonstrate that Lithuania was continuing the traditions of the State that existed between 1918–1940. On September 4, 1991, a new design by Arvydas Každailis was approved based on recommendations of a special heraldic committee. It abandoned romantic interwar traditions and went back to the times of the Grand Duchy of Lithuania. It re-established the original colors. However, early coins of centas still bore the old Zikaras' design until 2015.

In 2004, the Seimas confirmed the new national symbol and the historical flag of Lithuania. It depicts the coat of arms on a rectangular red fabric. It did not replace the tri-color national flag of Lithuania. It is used only by official institutions for special occasions and anniversaries. It is currently proposed that a larger version of the coat of arms should be adopted. It would have a line from Tautiška giesmė, the national anthem of Lithuania, "Vienybė težydi" (Let Unity Flourish). The Seimas, in fact, uses a larger version of the coat of arms with this phrase as its motto, along with two supporters, the dexter one a griffin argent beaked and membered or, langued gules, and the sinister one a unicorn argent, armed and unguled or, langued gules, and the ducal hat on top of the shield. The President of Lithuania uses the shield and supporters only.

Jonas Trinkūnas, the leader of a neo-pagan movement Romuva, believes that in the Lithuanian mythology Vytis represents Perkūnas, a god of thunder.[4] It is believed that the Vytis may represent Perkūnas as supreme god or Kovas who was also a war god and has been depicted as a horseman since ancient times. Gintaras Beresnevičius also points out that a white horse had a sacral meaning to Balts. These interpretations coincide with one of the interpretations of the German coat of arms, that suggests an adler being the bird of Odin, a god of war, which is commonly depicted as a horserider.

Origins of the word Vytis 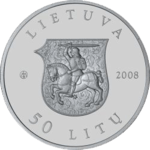 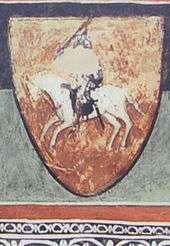 One of the oldest colorful Vytis depiction (XIV century).

It is unknown for certain what Lithuania's coat or arms was initially called; Edmundas Rimša asserts that a word Pogonia in old Belarusian was applied to it for the first time only in the 16th century.[5][6] The earliest known name of the coat of arms in Lithuanian is a 17th-century translation of Pogonia by Konstantinas Sirvydas as Waikimas ("Vaikymas" in the modern Lithuanian orthography), which was used until the 19th century together with Pagaunia.[7]

The origins of the Lithuanian proper noun Vytis are not clear either. At the dawn of the Lithuanian National Revival, Simonas Daukantas employed the term wytis referring to the "rider" for the first time in his historical piece Budą Senowęs Lietuwiû kalneniu ir Żemaitiû published in 1846. The etymology of this particular name is not universally accepted; it is either a direct translation of the Polish Pogoń, a common noun constructed from the Lithuanian verb vyti ("to chase"), or least likely a derivative from the East Slavic title of the knight – vytiaz'. The first presumption raised by linguist Pranas Skardžius in 1937 is challenged by some since Pogoń does not actually mean "chasing (knight)". In support of the second proposal, the Lithuanian language has words with a stem -vyt in such personal names as Vytenis, furthermore, vytis has a structure common to words constructed from verbs.[8]

In 1884, Mikalojus Akelaitis coined the name Vytis to the coat of arms in Lithuanian in the newspaper Auszra.[9] This name came to popular use and was eventually legitimized and became official in the independent Republic of Lithuania.

In the Russophone world and East Slavic culture there is a similar word Vityaz which means a brave knight or a bold hero. According to the Brockhaus and Efron Encyclopedic Dictionary that word has derived from the Old Germanic Witing.[10] In western South Slavic languages (Slovenian, Croatian/Serbian/Montenegrin and Macedonian) vitez denotes the lowest feudal rank, a knight.

The former coat of arms of Belarus (Pahonia, last used 1991–1995) is very similar to the Vytis, with slight differences: the patriarchal cross with arms of uneven length is displayed on the shield and the saddle blanket is of the Renaissance style; Azure is absent from it altogether. Several Gediminid Lithuanian, Polish and Russian noble families adopted the earlier versions of the coat of arms with some modifications, namely Czartoryski, Trubetzkoy and Galitzine. Recently adopted coats of arms of Vilnius and Panevėžys counties use different color schemes and add additional details to the basic image of the knight. Several towns in Lithuania use motifs similar to the Vytis. For example, the coat of arms of Liudvinavas is parted per pale. One half depicts the Vytis and the other, Lady Justice.