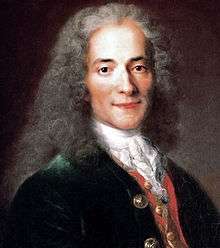 Voltaire was the first in the modern period who attempted to write a history of the world, without use of religious and nationalistic interpretations of the past.

Universal history, the result of a universal, cosmopolitan interpretation of historical events and mankind as a whole, coherent unit, preceded the nationalization of history. In the Western world, this motivation to imagine a universal history became influential in the 18th century when numerous philosophers promoted new cosmopolitan ideologies,[4] after the ethno-religious conflicts of the previous century, and the subsequent consolidation of states which attempted to impose themselves over religious particularisms. Colonial experience (many European countries had colonies) exposed society in Europe to numerous different cultures and civilizations. It is also very important to take in consideration that the 18th century was in the age of enlightenment when people's activities, both on individual and social level, were determined with desire to follow rational scientific judgment while changing the society, which released them from restraints of customs and arbitrary authorities based on faith, superstition, or revelation and backed up by religion or tradition.[5] All these circumstances provided suitable surroundings for development of universalistic, liberal and rational global perspectives in studies of society and its past and writing historical texts.

In his Essay on customs (1756) Voltaire studied development of civilization in the world with universal perspective, rejecting tradition, Christian and national frames. He was significantly influenced by Jacques-Bénigne Bossuet and his work Discourse on the Universal history (1682) when he was first who seriously attempted to write a history of the world, without limits imposed by nation or religion, emphasizing economical, cultural and political history. Imanuel Kant developed ideas about universally applicable moral imperatives in his work Perpetual Peace (1795) and designed a plan for establishing cosmopolitan liberal order which would result in perpetual peace. Universalism of the 18th century created an ideology which in modern form could be identified as modern civil society.

The emerging of modern historiography is connected with German universities in the 19th century and the significant influence of Leopold von Ranke who insisted on objectivity and systematic use of historical documents in the form of authentic primary sources; his credo was to perform reconstruction of the past "as it was".[6] Ranke's universal precepts in virtually all his works were, however, applied almost exclusively to the history of states and nations .[7]

Causes of Nationalization of History

Though nationalization of history could probably be traced from the earliest phases of creating historical works, it was in the period after the French revolution that creating of historical works started to be strongly influenced by national perspectives, and that perspective gradually became globally dominant with its culmination during the 19th and at the beginning of the 20th century. Nationalism was estimated as the proper perspective to such an extent that nationalization of history remained unnoticed till recently (1980s and 1990s) and was not studied in historiography in a scale that would correspond to its significance.

Many various reasons, depending on the circumstances, caused nationalization of history. Probably the most important is national revival, the important element of which was nationalized history,[8] that resulted in the emerging of modern nations and nation-states, mostly during the 19th century. With the emerging of national states, a global universal approach to writing history lost ground to the nation-state and was very much captured by it even in a significant part of the 20th century.[9] The professionalization and institutionalization of history that took part in nation-states' institutions during the 19th and first half of the 20th century was closely connected with the process of history's increasing nationalization.[10] Nationalization of history was additionally entrenched by the development of national curricula in schools based on "monumental and prestigious" series of "authoritative" national stories, often written in insular style and justificatory manner.[11] 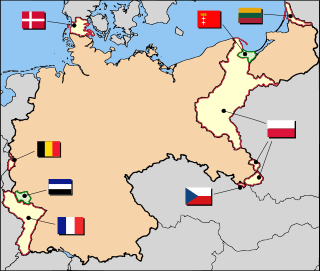 Germany after Versailles:
Administered by the League of Nations
Annexed or transferred to neighboring countries by the treaty, or later via plebiscite and League of Nation action
Weimar Germany

After the First World War was finished, in some cases during establishment of new frontiers, the principle of national self-determination was taken in consideration during frontier demarcation. Therefore it was necessary to establish the national historical character of certain territories and settlements, like in case between Germany and Poland and the Versailles treaty when numerous historians prepared short studies in an attempt to support territory demands based on Germany or Poland.[12]

Renationalization of History on Ukrainian Example

The nationalization of history in Ukraine had two separate phases:[17]

The irst phase chronologically coincided with the process of "rediscovery of tradition" and national revival that captured all of Europe, while the second phase takes place in a period of globalization, vanishing cultural frontiers and aggressive international forms of mass culture.[19]

Legacy of Nationalization of History 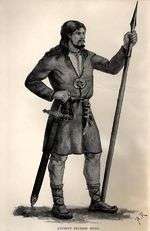 One of the most important consequences of printed texts of nationalized history is providing a basis for national revivals in the process of creating modern nations.[20] Projects of national awakenings captured nationalized history and turned it into a weapon of popularization of national myths in the period of establishing history as a social scientific discipline. A shortcut to production of national mythologies that proves ancient origins of modern nations, providing them with a respectable past, was forgery of historical documents, literature and historical works that were lost for some time, and then suddenly rediscovered to the approval of an astonished grateful public. Authors of such rediscovered treasures that were in a quest for success and glory did not suspect that they were in fact builders of as yet nonexistent modern nations.[21] Even when it was obvious that certain texts were basically invented national myths, many social groups, and even intellectuals, wanted to believe that they were authentic national epics, like the Kalevala in Finland.[22]

The nationalization of history, which had its origins more in the epics and tendentious oratory than in philosophy, sometimes grew the idea of an esprit des peuples or national spirit, and, later still, the idea of the 'mission' of each nationality. Such ideas did not evolve into groups of associated individuals, but into universal spirits that can destroy individuals and nations.[23] 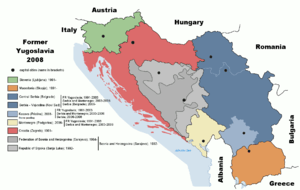 State entities on the former territory of Yugoslavia, 2008.

Nationalization of history affects all aspects of life, from relationships with other nationalities to architecture. This is a result of the fact that nationalization of history corresponds with nationalization of nature, and the fact that reservations and hostilities toward other nations accompanied nationalism from the beginning.[25] At the end of the 20th century there was extreme nationalistic interpretation of Balkan and Caucasus history, which became powerful weapons in ethno-territorial conflicts and accelerated disintegration of multinational states like Yugoslavia and the Soviet Union.[26]

After disintegration of multinational states like Yugoslavia and Soviet Union, besides the process of renationalization of history, there is sometimes also retroactive nationalization of victims or tragedies of the people that in past lived in those states. According to new national historical narratives, the reason for some people being victims or suffering some tragedies was because they were of a certain nationality, like in example of Ukrainians and Soviet Union.[27] Nationalist discourse in Croatia presents the Bleiburg tragedy as an event where only Croatians suffered and died just because they were Croatians, eluding the fact that many of the victims were Serbs, Montenegrins or Slovenians while many Croatians had died struggling in quisling forces against Yugoslavian partisans.[28]

In cases when history was reinterpreted and filtered by the media and official orthodoxy there is a situation in which nationalization of history leads to its denial.[32]