The "Nadars" are an entrepreneurial South Indian caste that constitutes 12% of Tamil Nadus population. The Nadar community was not a singular caste, but an assortment of sub-castes and classes of different origins, which in course of time, came under the single banner Nadar. One such sub-caste is the Nattathi Nadars, who were predominant in the village of Nattathi near "Sawyerpuram", Tuticorin district, hence the name Nattathi Nadars.

The legend of the origin of the Nadars tell of the birth of seven sons; with the death of two, the remaining five father the separate divisions of the community. There were five major divisions among the Nadars.[1]

The Karukkupattaiyathar are supposed to be the original inhabitants of the country around Manadu. This sub-division was later known as Mara Nadar. They claim to be the descendants of the Pandyans. It is the largest of the five subcastes and constitutes about 80 percent of the entire community, including the aristocratic Nelamaikkarars and the climbers beneath them. The Nelamaikarrars and the climbers are endogamous groups, forming sub-subcastes that each marry only among themselves.[2]

The term Mel-nattar comes from Mel-nadu (western country). Mel-nattars lived traditionally in the Southern Travancore and Western Tirunelveli districts. They claim to be descendants of the Chera kings who settled in the area of the Western Ghats after the fall of their dynasty. They can be found today mainly in Ambasamudram, Sankarankoil, Srivaikuntam, and Nanguneri.[3] 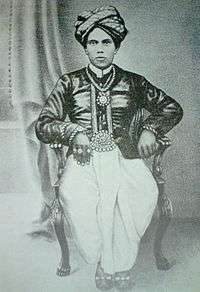 They are predominant in the village of Nattathi near Sawyerpuram, Tuticorin district. They are traditionally cultivators, traders and money lenders. Legendary accounts claim that the Nattathis are descendants born of the Pandyas and Cholas. The community is today predominantly Hindus and CSI Christians and remains an endogamanous unit. The overlord of Nattathi was a retainer of the Kattabomma Nayaka. The Nattathi overlord was invested with Zamindari rights under the British. The last of the Nattathi zamindars, Tiruvarudi Vaihunda Nadan, died in 1892. The properties of the Zamindar were eventually divided among a number of claimants.[3]

They are found in Ambasamudram and Tenkasi taluqs and traditionally palmrya climbers. They are supposed to have migrated to the Pandyan country from the banks of the Cauvery River in Tanjore to serve the Pandyan kings as their flag bearers.[4]

The Kalla Shanars were considered as one of the division of the Nadar community. Kalla is NOT the same as the Kallar caste. The term kalla means "false". They are believed originally to have been palanquin bearers for the Pandyan kings or menial slaves of the Nelamaikkarar family, having descended from illegal unions within the Nadar community. They are traditionally toddy tappers.

The subsect culture is not present today among the Nadars north of Tirunelveli but it still exists among those of southern Tirunelveli.[5]

In 1680, the first congregation of Nadars was started at Vaddakankulam with the conversion of Nadar women and a church was built accordingly in 1685. A permanent mission was established in 1701. Some Nadars accepted Christianity through will and some accepted it due to their aversion to local beliefs.[6] Madras state.[7] Nadar Christians, like Hindus, marry within their caste.[8]

The Nattathi Nadar uravinmurai in "Theni" and Usilampatti are providing community services like running educational Institutions and hospitals. The efforts taken by community leaders to form Nattathi Nadar uravinmurai at Nattathi failed during 1975 and 2000 because of lack of consensus and disagreement in the worship and management of the Poorviga Temple AathiAdaikalam Katha Ammaiyar Amman Kovil at Nattathi. The esteemed Aathi Adaikalam Katha Ammaiyar Amman Temple at Nattathi has a history dating over 500 years. This temple has no statue inside the main deity. The type of worship performed in this Temple is known as OLI VALI Valipaadu with the theme that signifies God is light. The Temple has 64 peedams, each for the 64 Indees of Nattathi Nadars, which are illuminated during the month of Karthigai.

Indees mean family division within Nattathi Nadar community. It is recalled that there are 64 family groups in that community. They will not marry within their own indee. Till now they are following their marriage custom. The last zamindar(1892) was from Thiruvaluthi Nadar indee.

Mr. M. Athilingam, Kumarapuram, Sawyerpuram became the Second Panchyat Union Chairman from the Nattathi Nadar Community, who was elected from the Tuticorin Panchayat union council and served from 1986-1991. He was instrumental in bringing the Tuticorin Airport at Vagaikulam. He formed several new roads by getting land as donation from Theri farmers and created a new road Agasthiyar salai of 7 km connecting Kattalonkulam and Sawyerpuram. He also constructed many new local Panchyat Offices. Since moved to the United States of America in 1991, he has worked as a Notary Public in the State of New York.

Mr. S. Nainar Kulasekaran, Nattathi held several positions in the Congress party and contested in Assembly election from "Srivaikuntam" assembly in 1977, but was defeated. His efforts to form the Nattathi Nadar Association during 1975 and 2000 were futile. Since then, he has formed his own self-styled Tuticorin district Gramavaal welfare association for the benefit of farmers and providing support to local members.

Mr. Muthu Vaikuntha Pannaiyar, the grandson of last Zamindar Thiruvaluthi Vaikuntha Nadan was the first unopposed president of Nattathi panchyat. For a few decades he and his son Mr. M. Thangaswami Pannaiyar were the unopposed Panchyat Presidents of Nattathi Panchayat. Mr. Thankaswami Panniyar was an devotee of Aathi Adikala Katha Amman. After the demise of Mr. Thankaswami panniyar, his son Mr. T. Kalidoss pannaiyar is working for the welfare of farmers. He also managing the day-to-day activities of Aathi Adikala katha amman temple which was the presiding deity for Nattathi zamin.